the Urban Cultures of Global Prayers

An exhibition project by Neue Gesellschaft für Bildende Kunst, Berlin, in the realm of  »global prayers ∙ redemption and liberation in the city«, in co-operation with Camera Austria.
»Global Prayers« is a project by metroZones – Center for Urban Affairs, Berlin, Haus der Kulturen der Welt, Berlin, Europa-Universität Viadrina, Frankfurt/Oder, including a research project by Forum Transregionale Studien, Berlin – co-produced by Goethe-Institut and Heinrich-Böll-Stiftung. 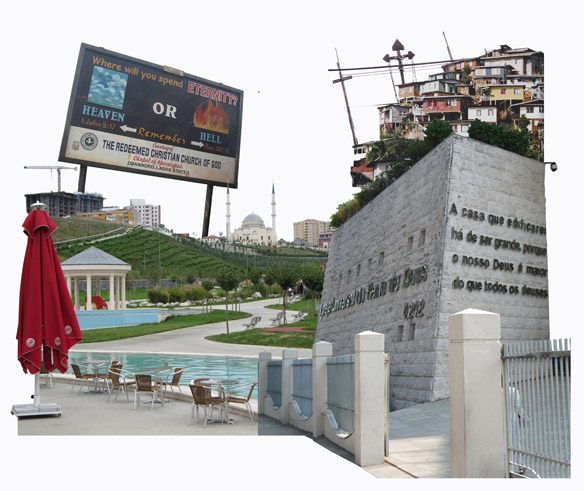 The exhibition “the Urban Cultures of Global Prayers”, initiated by metroZones, Berlin, has been focusing on new communities of faith in different local contexts since early 2010. Here the central perspective of the project is the city and the interplay of the new religious practices with local living conditions and global social tendencies. Which influence do religious rituals have on the spatial organisation of large, highly dynamic major cities like Lagos, Mumbai, Jakarta, Istanbul, Rio de Janeiro, but also Berlin? And how do different religious movements appropriate the cities as a stage, which shifts of meaning do they create? The superordinate research project “Global Prayers” is set up as an interdisciplinary research project, which places a high value on social sciences and geographical approaches, but also and especially on artistic and documentary forms of production. In addition to a series of books and numerous events, two exhibitions at the Neue Gesellschaft für Bildende Kunst in Berlin and at Camera Austria Graz therefore also belong to the project’s forms of publication.
With “the Urban Cultures of Global Prayers”, Camera Austria is tying into explorative issues that were already negotiated through exhibition projects and the magazine Camera Austria International last year: into the two-part project “Communitas” on questions of community, on inclusions and exclusions, on current identity politics or the questions of the political instrumentalisation of cultural identity; but also into issues of the “documentary as political practice” from Camera Austria International No. 114, with these latter issues understanding the image as being drawn into contradictory regimes of representation and persistently challenging its authentication.

the Urban Cultures of Global Prayers

New religious movements and organizations obviously play an increasingly important role in the large cities of the world. They are transforming the urban topography, appearing as economic as well as political players, and often replacing the role of the state—across all regions and religions.
In Lagos, the largest Pentecostal church offers room for five times as many believers as the world’s biggest soccer stadium; a very own City of God is emerging on the outskirts of the metropolis. In Beirut, Islamist organisations are taking charge of rebuilding quarters destroyed during the war and control the provision of housing. In Rio de Janeiro, movie theaters are converted into temples, while in Mumbai public spaces temporarily become stages for religious theater. New religious movements demonstrate their physical presence in the streets and are expanding their territory.
This is the discursive setting for the research project and exhibition “global prayers∙ redemption and liberation in the city”, initiated by the group metroZones, that since 2010 has studied new religious communities in widely varying urban contexts. The city and the interaction of the new religious practices with local urban culture and global trends in society represent the central points of reference for the project.
The international exhibition “the Urban Cultures of Global Prayers”, has been focusing on new communities of faith in different local contexts since early 2010. Here the central perspective of the project is the city and the interplay of the new religious practices with local living conditions and global social tendencies. Which influence do religious rituals have on the spatial organisation of large, highly dynamic major cities like Lagos, Mumbai, Jakarta, Istanbul, Rio de Janeiro, but also Berlin?
“the Urban Cultures of Global Prayers” offers differentiated insights into cultures, policies, and economies of faith in urban space, into the interrelations between urban development and sacred practices, between promises of spiritual redemption and social liberation. Beyond ideological debates on the “regained strength of religiosity”, it becomes evident in the works of the artists from twelve countries that big cities are also always places of religious innovation. The main emphasis of the exhibition is on the visual and media formats of photography, video installation, and soundscape.
In close cooperation between artistic and academic researchers, “global prayers” explores how new policies, economies, and cultures of faith function in urban space, which kinds of images and sounds, spaces and practices, religiosity produces under the strong influence of globalisation. The investigations are dedicated to the relationship between new religious communities and the transformation of the urban in topics such as urban planning and statehood, selforganisation, mediality, cultures of everyday life, and the localization of transnationally operating players.
Belief is also a medium around which a sense of community can be organised, where common values, rituals and objectives are established that are inscribed in everyday life and generate moments of transformation in relation to issues of social and political identity. The exhibition project “the Urban Cultures of Global Prayers” thus follows similar issues that were already raised over the last year in other exhibitions and in the journal, including the two-part project “Communitas” and addressing questions it posed with respect to the notion of community, inclusion and exclusion and current political identities and with this the question of the political instrumentalisation of cultural identity, while also considering “the documentary as political practice” a topic that was also found inCamera Austria International No 114. The overwhelming presence of certain images produces a certain way of knowing, a kind of visual programming of political space. What role might artistic practices play both by means of and beyond photography to break through this programming? How do religious movements relate to questions concerning the ideologisation of religion that correspond to an ideologisation of (medial) images? But here it cannot be a matter of playing out the contradictions within a regime of perception drawn along the lines of an ostensible “inside” vs. an ostensible “outside”, nor can it be a question of merging the regimes of perception and image into one. It is rather a matter of making these aspects visible and of working with them as part of project. The exhibition “The Urban Cultures of Global Prayers” thus produces an eminently visual space within the debate over religion, urban space and the politics of representation. In their theoretical texts written on the occasion of the exhibition project within Camera Austria International No 116, Jochen Becker and Axel John Wieder elaborate on the correlations between urban development and new religious movements.
“the Urban Cultures of Global Prayers” is an exhibition by NGBK within the framework of “global prayers • redemption and liberation in the city”, in Cooperation with Camera Austira. “global prayers” is a project by metroZones – Center for Urban Affairs with Haus der Kulturen der Welt, Europa-Universität Viadrina in Frankfurt/Oder and a research project at the Forum Transregionale Studien – co-produced with Goethe-Institut and Heinrich-Böll-Stiftung.
metroZones | project group “the Urban Cultures of Global Prayers”:
Jochen Becker, Christian Hanussek, Anne Huffschmid, Nadine Jäger, Stephan Lanz, Oliver Pohlisch, Katja Reichard, Kathrin Wildner. A bilingual exhibition booklet will be published at the opening of the exhibition. Already published is Urban Prayers – Neue religiöse Bewegungen in der globalen Stadt (metroZones, ed.)
Close Print

Guiding Tour with participating artists and Round Table