November 25, 2005
in the course of the
opening of the exhibition
David Goldblatt: Intersections 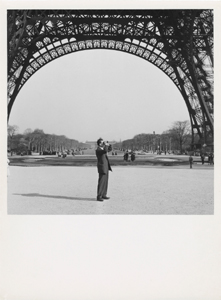 Walid Raad’s (born in Chbanieh in 1967, Libanon (RL), lives and works in New York) work represents one of the most consistent art approaches toward questions of history, mass media and the artistic presentation of the Arab world. His work is acute in establishing a critique of multicultural story telling from the perspective of the capitalist first world. His main contribution to the status of contemporary art photography and the moving image is a multi-layered recontextualisation of the discrepancy between fiction and fact in current photography and mass media image productions and between the existential and strategical conditions of contemporary art projects.

Walid Ra’ad’s works include textual analysis, video, performance and photography projects that concentrate on the Lebanese civil wars, the Arab-Israeli conflicts, and documentary theory and practice. His activities also include “The Atlas Group”, a Beirut-based non-profit research foundation which documents the contemporary history of Lebanon. Furthermore, Raad is a founding member of the “Fondation Arabe pour l’Image”, an organisation formed in 1996 in Beirut which aims at promoting historical research of the visual culture of the Arab world and encouraging experimental video production in the region.

Walid Raad’s work is important because it shows clearly and deeply the clash between existential stories pretending to be documents and the absolutely anti-documentary visual approach present today on several levels of image production. Raad’s work confronts us with the mise-en-scène of appearance in the mass media, history and art. The result is a queer story, that is not-right and not quite in balance with truth and falsity and which points precisely to the conditions of construction of such images and their underlying histories. Therefore it is possible to connect Raad’s work also with political story telling and with new relations between politics and representation.

A contribution on Walid Raad was published in Camera Austria International 80/2002.