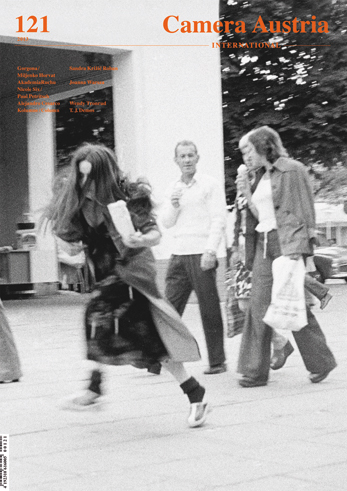 The “Renaissance” of artistic practices from the 1970s is also fuelled by a certain aspiration to reactivate the political moments seen during that period, with the transition from conceptual to performative strategies apparently assuming an especially important role. In the interstices between the two, the fundamental requisites for artistic strategies are discernible—aiming, from the very core, to label and change social and political disparities.Yet the revival of these debates is not only owed to such “conjuncture of the political”.

Early on, the works of Gorgona, a proto-conceptual artists’ group from Zagreb, anticipated practices that were to become characteristic of the 1970s, like the book as artwork, art as a stance, language as medium, art as idea, et cetera. The photographically documented actions of this heterogeneous group attest to their intention of fostering the unintentional, to a ridiculing of what is actually desirable, to an emphasis of the absurd potential of everyday life. Their nihilistic-existentialist habitus, which has set out to challenge conventions within society, can nevertheless hardly be compared with the conversely absurd-comical gestus of the Warsaw-based group Akademia Ruchu—albeit the actions and performances of the latter group, which are based on street theatre, are not short of political poignancy towards the system prevalent in the People’s Republic of Poland or towards the laws of the free market economy that took over the country as of 1989. With over 600 actions and performances to date, Akademia Ruchu is still shaking the status quo today by alienating what is familiar, furthering critical perception, fostering understanding for concepts of collectivity and multitude, and, not least, associating art and life.

Appropriation has thus been employed by both Gorgona and Akademia Ruchu as a natural instrument, as a universally accepted principle of creativity and authorship. Alejandro Cesarco, too, makes use of it in his artwork. His piece “Where I’m Calling From” borrows its title from a short story by Raymond Carver and exhibits a series of affective similarities: “Like Carver’s story, the story here is in the references, its borrowed intentionality, the use of pictures to not only allude to the importance of a particular person, text, or experience, but to illustrate that the place of address is its own context, is in the act of telling itself.” (Wendy Tronrud).

Austrian artists Nicole Six and Paul Petritsch bring the concept of appropriation into the space of this magazine—literally. In “Schuss / Gegenschuss” (Shot / Counter-Shot), the artists shot each individual sheet of their contribution to this issue twice with a small-bore rifle. On a material level, they have therefore ensured inscription into the politics of representation—a performative act that entangles the space of the magazine with spaces of agency of an entirely different character; and an act whereby each sheet asserts the claim to being a unique work of art.

This year, over the course of four issues, Jan Wenzel will comparatively analyse various artists’ books by different artists from different time periods. We have created a special section specifically for these texts: “The Revolving Bookshelf”.

T. J. Demos is our columnist of the year for 2013. Demos’s contributions on “Spectro-Aesthetics” address the pivotal issues related to the pictorial representation of time and/or politics, but also to the documentary as a political practice, calling on us as viewers and readers to break “the spell of our subjection to amnesia and blindness, inviting us to live differently by … reconnecting the present with its historical conditions, and reinventing the future—politically, socially, economically—on the basis of that knowledge.”