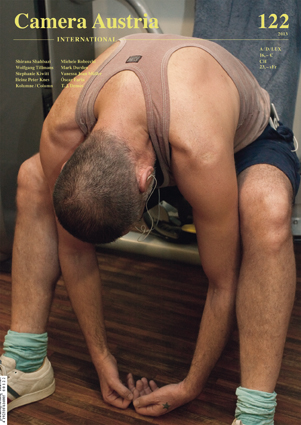 We repeatedly encounter pictures taken by artists whose works, though conceptually-strategically and self-evidently compiled as series in books and exhibitions for content-related reasons, indeed also offer lingering impressions and effects as individual images in and of themselves. They are photographs that captivate simply through their pictorial precision; works that primarily have impact due to their visuality rather than expressing something through approaches to visualising “something”; pictures that lay claim to an enduring validity while simultaneously eschewing both an immediate description of what we see there and a veiling theorisation.

The works of Wolfgang Tillmans are a good example of this. In no way is the cult surrounding images confirmed here—instead, it pays to grasp his photos as genre pictures. Expressed in his works is a form of (ethical) thinking about things, while at the same time the artist remains closely attuned to the object; images are not adjusted, nor are realities shifted. Tillmans’s photographs do not assume validity via a conceptive fundamental idea that interconnects the works but rather are, each “in itself”, precise descriptions of spaces and their atmospheres, which (especially in his more recent works) develop far beyond the visible depictions of surfaces and the related materiality. Sometimes this transpires by way of the pictorial carrier itself, the photo paper, and sometimes by way of the light active within, which references the many ends of the world and its inhabitants, whom Tillmans associates in this cycle.

“The opportunity to physically reconfigure and market oneself may also be interpreted as yielding personal liberation beyond adaption to external pressures,” as Vanessa Joan Müller finds thematised in Stephanie Kiwitt’s series “GYM”, which also implies finding an appropriate photographic form for these attempts at reconfiguration. Of issue here is not only the seriality of this recurring and repeatedly renewing exertion as a documentary “motif” in the series; playing out here is also a conflict (between the body and the tuning thereof) that appears as a formal element in the individual images.

Óscar Faria’s text on the work of Heinz Peter Knes, who in his photographs pictorially orbits a cabin and its disappearance, dedicating himself to a downright archaic topic with this “migration of forms”, especially traces the disparate moments: revealing a new story with each new picture, becoming enmeshed in contradictions, beginning again from another perspective. “there are no credible witnesses, nor the faintest clue.” The construed trails cannot be verified, the story wants to interlink but then again not, each image opens up a new possible context which, however, is reluctant to be contextualised.

Shirana Shahbazi’s artistic practice—ensuing from the tradition of iconography in her homeland of Iran, which it seeks to associate with the pictorial traditions of the “West” (studio portraiture, still lifes, landscape painting)—entails more than complex pictorial references. Beyond their meaning, her works are also distinguished by an “intrinsic beauty”, as Michele Robecchi writes. The visuality of photography can only be evaluated based on a multifaceted perspective, which would also encompass the term beauty.

The Forum section of this edition has been curated by Croatian artist Igor Eškinja (“Zero Point of Meaning”, Camera Austria Graz, 2013) out of his own proposals and from submissions to the editors.