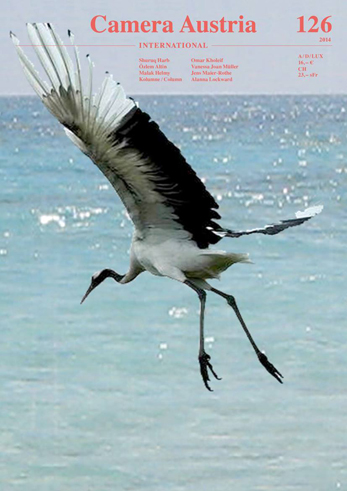 The starting point for the current issue with contributions by Shuruq Harb, Özlem Altin and Malak Helmy was initially summed up with the term “visual agency”. The increase in dissemination channels and the accompanying (at least potential) publicness of visual narratives has resulted in the fact that there is hardly any more control over the contexts in which images circulate and how they are perceived, interpreted, commented on, and exploited. In the (relatively new) mass media euphemistically called “social” networks, images in any case alternate unchecked between the registers of fiction, authenticity and fetish, between evidence and manipulation, criticism and affirmation, and pass through the most varied and contrasting contexts.
How do matters therefore stand with respect to the agency of images under these circumstances of the unshackling of the visual? What strategies do artists select to produce a specific context, to occupy the specific site of a visual assertion? How do they react to the routes of appropriation and reinterpretation to which the images lose their title and credits? Which images do not exist nevertheless; which have been neglected? What is still suppressed so that it cannot become visible? Such questions lead to an idea—of any type whatsoever—of a “site” of images that might be constructed and from which they can be read. Yet, just as what can be seen and what can be said are linked by the boundary that separates them, the contributions in this issue are connected to the idea of their conception in that they oppose or at least, however, shift it.
Shuruq Harb’s “The Keeper”—which was published in 2011 as a limited book edition—at the same time also comprises an installation and a performance and makes use of the archive of Mustafa, a street vendor in Ramallah, who prints out images from the Inter- net and sells them in boxes. In the past, Mustafa’s family still imported images, for instance, from China, Lebanon, or Syria. In 2010, Harb acquired some 2,000 of such unsold images and sifted through and arranged them together for “The Keeper”. This archive documents a changing access to images and a change in how they circulate. Many of these images were at times officially barely accessible or even banned, which is why the archive traces the history of image regimes—public as well as private—and thus represents a specific form of distribution of the sensible.
The work of Özlem Altin is linked with that of Shuruq Harb by the work on or from an archive. Central motifs in her oeuvre are the human body and the codes that it emits. In this, Vanessa Joan Müller, however, finds a subtle moment of the uncanny in and between her images, in the sense of a relationship between the animate and the inanimate that has become blurred, between the body and its eidetic double, which has solidified into a nature morte. The frozen poses, mute gestures, and motionless individuals subject them- selves to the discriminating gaze as objects and yet escape it again and again. What might seem to be a system of ordering can instead be described better through a type of stream of images and image layouts, an ongoing constructing and deconstructing of meanings, references and aesthetics.
Malak Helmy’s contribution goes back to a co-operation on an exhibition between Camera Austria and Beirut last autumn. “Unexpected Encounters” focused on the translation errors in political and cultural transfer. Malak Helmy participated in this exhibition with a sound work that took the mimetic abilities of the lyrebird as its starting point for addressing questions of identity and subjectivity. In his text contribution, Jens Maier-Rothe also writes about birds, migratory birds and their navigation skills. They always follow the same routes, in which their flight also seems to be a surveying of historical space. The artist pursues these traces in Egypt, a land of change, in which channels of communication decay like the coordinates of everyday life.
The fact that Camera Austria International is this year’s media partner for the f/stop Festival für Fotografie Leipzig is based on a connection of many years with the “site” Leipzig. After many discussions about how this co-operation might be made visible in the magazine, we decided on an independent contribution from the festival that makes the particular approaches to the contemporary in photography readable.