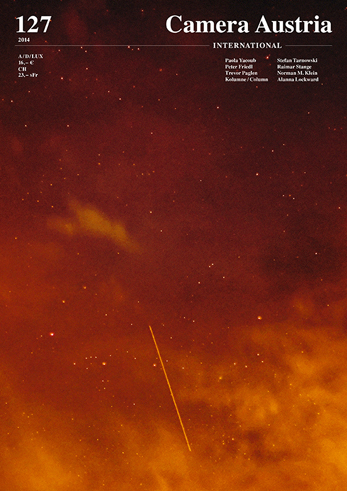 The rose merchants in Paola Yacoub’s “Les fleurs de Damas” (The Flowers of Damascus, 2002) could be Syrian spies. What is visible on Trevor Paglen’s photographs cannot be definitively identified. Even the context-eluding newspaper photos in Peter Friedl’s  “Theory of Justice” (1992–2010) are (no longer) self-explanatory. The artists presented in the current issue of Camera Austria International pose the fundamental question, among others, as to which strategies are used to achieve visualisation. What is actually visible? And to what extent does the visible correspond to the speakable? What happens when the pictures themselves want to become theory, as Peter Friedl wonders in the cover text of his book Theory of Justice 1992 – 2006?

Certainly, this discussion is far from new, yet considering the countless geopolitical crises that exacerbate conventions of secrecy, surveillance, disinformation, and acts of making events invisible, the question of a politics of visibility keeps arising, perhaps in ever more brief intervals. The issue regarding the flood of images showing so many different uprisings, revolutions, and protracted civil wars, is not only about what is to be seen but what cannot be seen anymore.

Paola Yacoub never did feel drawn to the sensational and dramatic signs of destruction in Beirut. When in 2011, during the Syrian Revolution, just such a flood of images showing the civil war—and a wave of refugees—came into play, and one began to wonder whether Syria would become the next Lebanon, Yacoub subjected her archive to viewing instead of producing new photographs herself. The aim was to explore in which way the current situation might correlate with Lebanese history. “Les fleurs de Damas” was already created in 2002, when Syrian forces occupied Lebanon and the country was controlled by the Syrian military intelligence. When Syria (officially) retreated from Lebanon in 2005, this control remained in place through various channels, even though less visible. “Men and sometimes children carry bunches of red roses in the streets of Beirut, in the Achrafieh neighbourhood, near Sassine Square. With these flowers they introduce unusual ornaments to the streets of Beirut. But nobody speaks to them, nor do they buy their flowers. And yet, every morning, they return to the same place with bunches of red roses. They always set themselves up in the same place, on the pavement, in front of a low, whitewashed wall, perfect for showcasing the flowers they display. In fact, everyone fears these ‘florists’ because they are strongly suspected of being members of the Syrian secret services.” (Stefan Tarnowski) The picturesque appearance of these rose merchants could simultaneously denote the presence of political and social control. “Les fleurs de Damas” are picture puzzles (“multistable images”, as W. J. T. Mitchell calls them) which show something that is visible and invisible at the very same time.

Trevor Paglen’s interest is focused on secret military or scientific facilities, laboratories, satellite systems, and so forth, that have been set up in remote areas or landscapes in order to elude the gaze—and thus the awareness—of the public. These insufficient (technical) means employed by Paglen in producing images of all facilities redouble their strategy of eluding pictures and/or visibility. In fact, this approach underscores the redoubling: military satellites moving across the nocturnal sky or military bases recorded with the strongest telephoto lenses from dozens of kilometres away. These photographs navigate the margins of abstraction and thus also identify, in a figurative sense, the limits of potentiality in creating a picture. At the same time, as Norman M. Klein writes, they represent a politics of secrecy, black budgets, and a neo-liberal, technological feudalism that aggravates inequality within society on an unprecedented scale. Yet any kind of secretiveness leaves traces behind. It is not as if Paglen’s photos show these traces. However, the conditions of their creation and the non-visibility that they evidence reference this imperium of “mass paranoia that becomes folklore”. (Norman M. Klein)

Between 1992 and 2010, under the title “Theory of Justice”, Peter Friedl compiled what he calls a “lyrical” collection of newspaper photos of protest campaigns that cover the entire geopolitical spectrum. In 2006, an eponymous book was published by MACBA in Barcelona, which shows these newspaper images solely according to the chronology of events. These are photographs that Friedl also considers pictures of “public integrity and intimacy”. The title references the examination of the role of justice in a “well-structured society”, as pursued by the American philosopher John Rawls in his A Theory of Justice published in 1971. Aside from the fact that the regulation of civil rights and obligations within a liberal social contract has assumed the form of a full deregulation, “Theory of Justice” also deals with the question of the representation of justice. Friedl’s tendency to circulate these images and to evade their original mediatic, social, and political fields gives rise to a somewhat different, unfinished, ambivalent, and open “Family of Man”. This is not characterised by the ideologised phantasm of common humanness, but by the struggles related to this commonness, evident in disputes, conflicts, utopias, but also clichés, infantile wishes, desires, and love. As Raimar Stange notes in his essay:  “Unambiguity and ambiguity are thus adjacently readable across the surface of this photograph—in a state of reciprocal relativisation. And so it is that this Historienbild (“history painting” or, in our context, “history photograph”) of aforementioned overdetermination remains slightly open, as does its meaning.”

All three artists featured in this issue explore, in our opinion, various boundaries of feasible politics of visibility. When counterchecked, they open up a broad yet inconsistent and even contradictory reasoning in explaining why pictures emerge, what they are capable of showing, what may be expected of them, what eludes them, what they cover up, what causes them to falter, and how this borderline might be examined and potentially also shifted. This is a reasoning that we wish to rekindle again and again with our magazine project.

The Forum of Camera Austria International No. 127 lends a view of the European Month of Photography, which is taking place during the month of October. The curator of the Berlin end of the festival, Frank Wagner, has selected six positions for this issue of our magazine, culled from more than 130 projects aligned to the overarching title “Upheavals and Utopias. The Other Europe”.
The current issue will be presented, in addition to this festival, at the following international events: New York Art Book Fair, Frieze London, and Paris Photo.