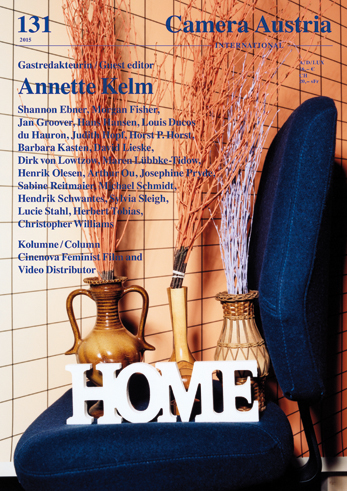 Once again we have decided to conceptually develop an issue of Camera Austria International together with an artist—after working with guest editors Tobias Zielony (Camera Austria International No. 114/2011) and Artur Żmijewski (Camera Austria International No. 117/2012), we have now invited the artist Annette Kelm to design the present issue with us. Annette Kelm has long been associated with the Camera Austria organisation, with our exhibition space and the magazine: after being featured in a main contribution to issue No. 102/2008, a solo exhibition in Graz curated by Maren Lübbke-Tidow was to follow in the year 2009, along with many discussions about her various exhibition projects.
Our interest in Annette Kelm’s artistic activity is sustained by her continuity in making pictures, which has always drawn on her cultural environment—people, objects, artefacts never assume the function of pure indices but rather become independent arrangements, “for all those who behold her pictures tend to grapple with the motifs” (Maren Lübbke-Tidow). So it is this contradiction between literalness and mystification that, in our eyes, makes her works appear exemplary for a productive occupation with present-day contexts related to photography.
Under the title “Belichtung und Farbwerte / Exposure and Chromaticity”, Annette Kelm has compiled works by artists who shed light on her own pictures or demonstrate a fundamental interest in image creation. Photography as an image-fostering medium takes centre stage here, which also becomes clear at the point where artists depart from the medium, where room in this magazine is made for drawing, collage (Judith Hopf, Henrik Olesen), painting (Sylvia Sleigh), and poetry (Josephine Pryde, Dirk von Lowtzow), which in this space attain a sense of given affinity. Yet “Exposure and Chromaticity” initially references the technical aspects involved in creating pictures “which are not evident to the beholder and are effectively non-apprehensible”. In her essay published in the current magazine issue, Maren Lübbke-Tidow describes precisely this gap between producer and beholder that arises on the path between the photographic shot (and all related questions and decisions) and the recipient’s act of deciphering the image: “we don’t really know what we’re seeing: photographing photographing.” Annette Kelm’s determined inclusion of such explorative questions related to photography becomes evident not least in the applied photography of Hans Hansen, whose conversation with Hendrik Schwantes concludes the section of this issue curated by Annette Kelm, laying bare the idea and potentiality of construction in the photographic image.
All this has given rise to what is, for Camera Austria, an unusual edition. And it is precisely this unusual nature, this removing-oneself-again-and-again from one’s own areas of interest and activity, that serves to greatly enrich and challenge work on the Camera Austria project. We would like to extend our enormous gratitude to Annette Kelm for her willingness to collaborate with us on this project, for her dedicated and tireless efforts, and for the time that she has chosen to invest.