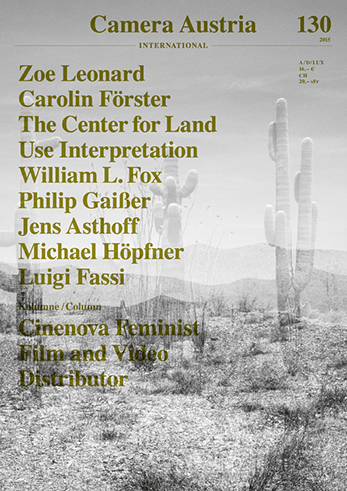 Landscape appears to be omnipresent, perhaps since it serves as a validation of one’s own psychogeographies, as a tourism brochure, or even as confirmation of the catastrophic decline of ecological systems. Landscape is involved in an immense production of visibility and, maybe for this very reason, is at risk of disappearing through a kind of over- or double exposure, as suggested by Philip Gaißer’s photograph printed on the cover of this edition of Camera Austria International. The image also demonstrates how landscape is never simply present, but rather in need of construction and reconstruction in order to be understood as an articulation of the present. Gaißer’s work is characteristic of this operation between the acts of documenting and intervening “in which the cultural and civilising interpenetration of the setting manifests”, as Jens Asthoff writes. A production of landscape is likewise evident in Michael Höpfner’s projects: created on his walks through Tibet, often lasting weeks at a time, are sequences of almost horizonless images. Instead of documenting what could be seen, they show what kind of spatial production provides the foundation for staging aspects of landscape. Finally, the bubblegum photographs by Zoe Leonard are also readable as a variation on landscape, whereby part of American cultural history has been deposited or can be reconstructed, being in fact so closely linked to everyday cultural aspects that, in a way, it also tends towards a banal lack of visibility.
Both Philip Gaißer and Michael Höpfner will be participating in an exhibition opening in July 2015, concluding a three-part project on the question of landscape realised by Camera Austria this year in cooperation with the Kunsthaus Graz. It particularly deals with the production of landscape in relation to migration, displacement, war, ethnic and cultural differences—and with the curiously uncertain presence of these conflicts. This presence makes reconstruction work necessary when landscape has become something of an archive of political conflicts whose beholding strongly gives rise to the question as to what can actually be seen or discerned.
It is, not least, for this reason that we considered it essential to invite The Center for Land Use Interpretation to contribute to this issue. The countless photographs in the Land Use Database also substantiate the idea of landscape as an archive, as a depository for the contaminated residues of a society focused on consumption and exploitation. It is a plethora of images that confronts us with the question of a possible future for landscape.
In their second contribution to this year’s Column, Irene Revell and Kerstin Schroedinger from the collective Cinenova Feminist Film and Video Distributor write—with a view to the question of a possible “feminist landscape”—about a “diffracted” gaze that “en-ables a vision that is diffracted, in more ways than one, with all that the material can offer at stake”.
“Resistant Images in Times of Digital Overexposure” reads the working title of Florian Ebner’s concept for the exhibition in the German Pavilion of the Biennale di Venezia 2015. This gives rise to the question of how something like resistance can even still be asserted, especially a resistance of images, when these very images threaten to disappear, are not really visible anymore. Florian Ebner invited Camera Austria to conceptualise a blog with contributions accompanying, commentating, and contextualising the exhibition from May to November. As with the magazine and our exhibition projects, in this blog we will set out to probe the margins of the photographic, but also the non-visual share of image production.