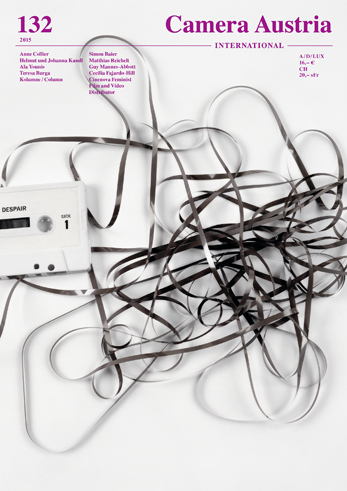 Processes that newly determine the distribution of political, social, cultural, and economic agency have long been playing out—not just starting with the events currently culminating around flight and migration in Europe—attesting to dislocation in terms of geography and politics. These processes of redistribution not only point to the future, to a different tomorrow, but also simultaneously induce a revision of the way the history of the present is to be written.
The current issue of Camera Austria International focuses on four artistic positions, which are exemplary and antithetical in equal measure, in an attempt to explore the issue of the construction and reconstruction of history, of remembrance and cultural memory. In the case of Anne Collier, her work often deals with the re-representation of already published visual testimonials. As Simon Baier notes, “most of the found objects originate from a past that, though not specified, usually goes back to the pre-digital era: photo books from the 1970s, or even photo albums. But also the music cassettes and LPs that Collier sometimes displays in her photographs are obsolete media in our present day and age.” But what does bringing supposedly obsolete material back into play mean, exposing it to a new gaze?
Helmut and Johanna Kandl have long engaged in travel, research, and photography, encountering a diverse range of people, friends of friends—in the Austrian Waldviertel, former Yugoslavia, former Czechoslovakia, and Ukraine. Memories, information, and pictures are arranged in an associative way, resembling less an organised archive than the spoken word, a narrative, a conversation. Banal motifs are constellated with world-historical ones, yet not as counter-narratives but rather as a part of history, as commentary and corrective of the grand narratives.
The contribution on Ala Younis in the present issue goes back to her participation in this year’s Venice Biennale. In “Plan for Greater Baghdad” (2015), she references Frank Lloyd Wright’s 1957 redesign of the city as “Persianate fantasia”. The Gymnase de Bagdad reached completion—in accordance with Le Corbusier’s plans from the 1950s—in 1980, at a time when millions of oil dollars were expediting the modernisation of the city. Guy Mannes-Abbott takes a fragmented approach to reconstructing this phase and contextualises the many misunderstandings and violations within history that were so fundamental to this modernisation.
We also invited Teresa Burga to present her work, an artist who has, since the 1960s, been probing traditional conceptions of art, as well as the role and status of women within society. With her unconventional, critical stance towards gender and art issues, Burga is—as Cecilia Fajardo-Hill writes—one of those artists outside of the European and North American mainstream who “have, despite their invisibility in art-historical books, surveys, and key museum exhibitions, created some of the most radical and original art in the twentieth century—works that we are only learning about now.”
It is in this sense of a necessary reassessment of representation and its role in the continued writing of history that we ultimately view our invitation extended to Eva Maria Ocherbauer to curate the Forum section, based on her teaching activity at LagosPhoto Summer School. In any case, a selection of works by her students shows a way of speaking about “Africa” that deviates from the many documentary and journalistic works familiar to us.