A project by Efrat Shvili in collaboration with Oren Myers,
curated by Reinhard Braun 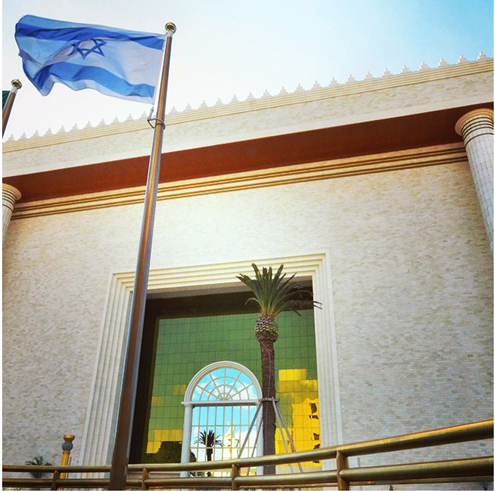 “The twentieth century began with consciousness, overexerted itself in terms of language, and ended with imagery” (Wolfram Hogrebe). Although here it is not hard to see in the term “imageery” a metaphor for the “Society of the Spectacle” (Guy Debord), “a world vision which has become objectified”. Walter Benjamin already noted in 1936 that humanity had become a self-focused “object of spectacle” (Schauobjekt). The question of how far images play a part in determining our reality has accompanied photography since its very beginnings—and it still remains an essential facet of its critical gaze.

Efrat Shvili, as an Israeli artist, has spent many years specifically exploring the construction of Israeli identity, collective memory, and the history of Israel. As part of the exhibition series “Disputed Landscape”, Camera Austria showed her work “100 Years” (2007) from May to July 2015. It features close-up shots of woods to the West of Jerusalem, clearly conflicting with the political nature of this particular forest. The works of Efrat Shvili frequently revolve around this political codification of that which is visible, around images that, as political objects of spectacle, conceal a different (possible) reality—and around what might counter this concealment with visibility. In “The Jerusalem Experience”—a new project on show for the first time and produced by Camera Austria—the artist takes a similar approach to examining a fabricated, reconstructed, and, to a certain degree, artificial experience, which nonetheless once again significantly impacts the current political situation in Israel: the Third Temple.

The Third Temple of Jerusalem—which ought to be rebuilt at the site of the destroyed temples of Solomon and Herod—is both a religious symbol of ultimate salvation and became an ambivalent and controversial political symbol of national unity for Israel, caught between religion and politics. Yet this future Temple will be situated in contested territory—on the one hand it is located at the site of today’s Dome of the Rock, on the other hand access would not be permitted to this most holy place for Jewish believers since it would be reserved for the presence of God. By definition, holiness implies being subject to restraint and being set apart from worldly life, an absent presence, eluding any manner of representation. Yet this perspective on the religious role of the Temple has significantly changed since the 1990s—more and more Jews have been visiting Temple Mount, which has become an “exalted totem embodying the essence of sovereignty over the Land of Israel” (Tomer Persico), that is, a present absence in the realm of current political relations.

Efrat Shvili links this narrative, so pivotal again for Israeli history since the 1967s Six-Day War including the occupation of East-Jerusalem and subject to repeated reinterpretation, with an astonishing architectural revenant all the way across the world. Edir Macedo, a former lottery worker and now bishop of the Universal Church of the Kingdom of God, an expanding Brazilian Pentecostal church, who is also a banker and the owner of a media empire in Brazil, had this Temple built in the working district of Brás, supposedly constructed anew according to biblical indications—even using façade stone from the Holy Land, namely from Hébron in the West Bank. The Brazilian Temple is a church, conference centre, and radio station all in one, boasting a helipad and room for 10,000 believers. It brings holiness—as originally tabooed space—into the present day, fully in line with the earthly religiousness of neo-evangelic Pentecostal churches and their “prosperity gospel”, which associates worldly wealth with the love of God. Criticism is rarely heard from Jewish organisations and adherents in Brazil, for they share a close relationship with the evangelical churches, which in turn have joined the fight against anti-Semitism.

In both cases, the relations between religion and politics have radically shifted, be it in relation to the “Temple Institute” initiatives to erect the Third Temple on Temple Mount in Jerusalem or to the building of the Solomonian Temple in Brazil. And in both cases, the Temple concept—as religious desire and real-political manifestation—initially took image form, or more precisely, has always taken image form. Efrat Shvili has collected such images, ones that have accompanied both the Temple myth in Jerusalem and the construction and dedication of the São Paulo Temple in the year 2014: pictures from the Internet, giant advertising posters, objects from museums. She photographed the old town of Jerusalem, excavation sites near Temple Mount, the “City of David”—the oldest populated area of Jerusalem and the most important archaeological site of biblical Jerusalem—and also the Brás district of São Paulo.

A constellation of these different images—as light boxes, C-prints, and in videos within the exhibition—gives rise to a re-staging of enactments, to the reconstruction of two phantasms, both of which most certainly circulate as objects of spectacle, as something that produces further images. Each is a world vision which has become objectified—a vision that alters the world and makes it inaccessible in equal measure. Consequently, for this reconstruction of a reconstruction as spectacle, Shvili uses not only photographs that she has made herself, but also phantasm-producing ones already in circulation, taken for a totally different reason: be it to demonstrate a kind of politics of archaeology, or be it to promote a current building project in São Paulo. Yet there is also a caveat to her appropriation of existing pictorial regimes: that we could recognise the truth by taking a picture ourselves, by coming to grips with reality through one’s own pictures, that we could approximate reality through these pictures, and this especially when this reality itself is altered, already encircled and concealed by images.

Just as archaeological excavations always have political signification in Jerusalem and may provide a point of departure for the rewriting of a history of the legitimisation of hegemony, the Temple in São Paulo represents a—neo-liberal—political intervention: as opposed to Christian liberation theology, which demands rights for the poor and the socially disadvantaged in South America, the Pentecostal churches support the acquisition of social privilege and wealth. Similarly, a newly shaped (politicised) religious state replaces the social and the (actually) political facets in both cases—for which it needs appropriate politics of representation and visual regimes.

It is not possible to simply work through these layers of representation and pictorial regimes with the help of a few pictures. In giving the name politics to the phantasm, to the (religious) spectacle, so as to describe the objectifications that play out with the aid of image politics, it is difficult to distance oneself and to adopt an inviolate critical position—we must approximate these images, nestle into them, and appropriate them in order to stage their re-enactment as political spectacle in the realm of art. “The Jerusalem Experience” is a kind of re-enactment, one that at times “plays” with the seduction and the rhetoric of existing images—so as to show that these pictures have an agenda, but also how they are linked to power and politics and how the images ultimately also act as a self-focused “object of spectacle”.