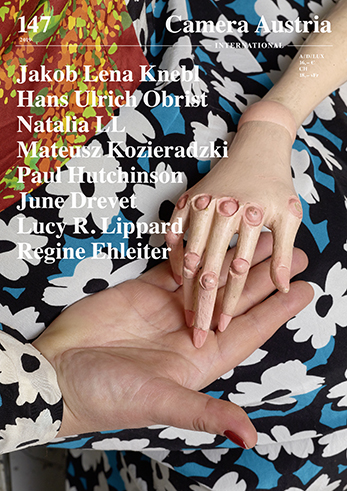 The positioning of the self in relation to its surroundings is the theme dealt with by the artists presented in Camera Austria International No. 147. They reflect on these relations from different angles: sometimes highly impartially and from an everyday standpoint, and other times from a predominately conceptual perspective. By localizing one’s own self within the immediate lifeworld, other references are set into motion and raise questions related to ephemeral identities, to norms and the breaching thereof, along with issues revolving around belonging and difference, as well as the resulting strategies of self-assertion.

In her installations, scenographies, sculptures, and photographic works, Jakob Lena Knebl interlinks art and design, as well as highly diverse areas of mainstream and high culture, with aesthetics that frequently prove challenging. The deconstruction of identities and their transformation potential are at the root of her work. “I approach positions and then also leave them again to switch to something that is new, challenging for me.” Against this backdrop, Jakob Lena Knebl speaks with Hans Ulrich Obrist about her work with marginalized positions and the place of mainstream, about stepping away from academically influenced art contexts, thereby also shedding light on the idea of a sweeping total work of art.

“Art is in the process of becoming in every instant of reality: to the individual, every fact, every second, is fleeting and unique.” These words were expressed by Natalia LL in November 1972 in her manifesto-like text “Transformative Attitude.” Mateusz Kozieradzki, in his contribution, analyzes the mostly conceptual photographs from the 1960s and 1970s by this Polish artist. The author takes a look at how these photographs revolve around themes like sexuality, desire, and consumption, and how they question the visual regime which up to that point had been dominated by the male gaze. Taking the private, often quotidian context in Natalia LL’s work as a point of departure, Kozieradzki traces its sociopolitical dimensions. The meaningful in everyday life, the socially relevant, as mirrored in the little things, in the seemingly trivial—these are topics echoed in the work of Paul Hutchinson. His photographs orbit around youth culture, big city contexts, nature’s way of penetrating urban settings, and also around fleeting moments imbued with something magical amid their apparent banality. June Drevet delves into Hutchinson’s microcosm in her contribution and wonders to what extent the “code of the present” is inherent to the scenes captured by the artist both photographically and lyrically, with his focus “never on fixed positions, but rather on fragile relations.”

A dialogue between historical and contemporary artistic activity has been opened up by Regine Ehleiter in her contribution “Re: Groups.” It ties into the (magazine) exhibition “Groups” initially realized by Lucy R. Lippard in 1969/70. In clearly defined instructions, Lippard presented the invited artists with the task of photographing a group of people seven days in a row and of giving very precise descriptions of the resulting images. The objective of this conceptual project was to highlight possible discrepancies between what can be shown and what can be said. Fifty years later, Regine Ehleiter passed this task along to contemporary artists, which has resulted in eleven contributions, all strongly heterogeneous in terms of content and visual form, yet all highly fascinating. Similar to Lippard’s endeavor, this project by Ehleiter is being presented not only in the context of a magazine, but also at an art school. It will be on show from October 4–6, 2019, during the Vienna Art Book Fair at the University of Applied Arts Vienna. We can’t wait to see it!