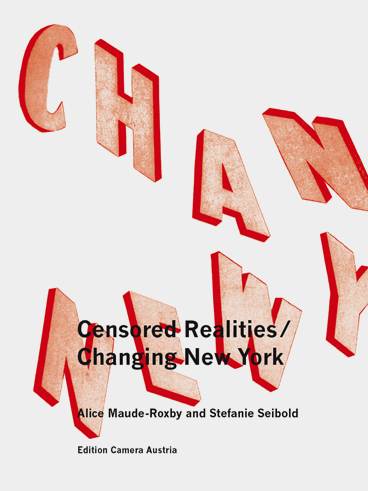 Within research of female/sapphic collaborations of modernity, a perpetual process of “erasure” or the “writing-out of art history” of female collaborators is exposed. One such example is evident through analysis of the 1939 Dutton publication Changing New York by photographer Berenice Abbott and writer Elizabeth McCausland. Little or nothing is known of the fact that all of the original McCausland captions for Changing New York were deemed not fit for publication by Dutton, and that the innovative spatial text-image design devised collaboratively by Abbott and McCausland was rejected. Instead, the publishers insisted on a very conservative approach to design and implemented a savage editing process reducing McCausland’s texts to terse and bland captions that bear almost no resemblance to those that had been intended. The published Dutton captions, as they appear in Changing New York, close down the ways in which Abbott’s images are read so that they figure much like the illustrations for a guidebook to the city.
Alice Maude-Roxby und Stefanie Seibold found the complete set of original captions to the book written by Elizabeth McCausland, a communist and socially engaged journalist and long-time partner of Berenice Abbott, in the archive of the Museum of the City of New York. They had remained intact and pretty much untouched since 1939. These highly critical texts act to place the photographs directly into the larger political and social context of the 1930s Depression in USA. The original attempt and idea for the book by Abbott and McCausland was to acknowledge both formats, text and photography, as equal in terms of activating meaning production and/or as tools for critical reflection. The book was intended to comment on the harrowing social conditions and inequalities of New York City in the 1930s.
The 2018 Camera Austria publication Censored Realities / Changing New York brings these complete McCausland original texts back into circulation. A numbering system, especially developed for this project, enables readers to realign each of the one-hundred originally intended texts to the corresponding photographs by Berenice Abbott, as they appear within the Dutton and subsequent Changing New York Dover publications. The book is complemented by an extensive text and original letters, giving astounding insights into the research process of the authors and the history of what they refer to as “Sapphic Modernity.”

This publication is part of a larger research base highlighting the contributions to modernism of women in general and non-heterosexual women in particular. One focus in our research considers collaborations by women in modernism, often as partners. The starting point for our project was an article by Canadian theorist and design-historian Jasmine Rault about two female (one American, one British) designers in Paris in the 1920s who met while one was writing an article about designer Eileen Gray’s work. Remarkable to us within Rault’s text is her striking statement about the strong connections she sees between women, modernism, and non-heterosexuality itself. Rault introduced us to the idea of: “the cultural field of Sapphic modernity … [as] a loose network of women who cultivated an intimate connection between female nonhetero sexuality and modernity itself, women for whom becoming nonheterosexual was synonymous with becoming modern.”¹ It is exactly this conflation of modernity with non-heterosexuality—avoiding all the later pitfalls of limiting identity constructions2²—that got us interested in the works of these often avant-garde, experimental but mostly marginalized art producers. So we started our investigation into modernism once again, this time considering all of modernism’s players, including those censored out or previously ignored.³
But our research is not so much interested in recuperating queer life stories—and we say queer even though the term queer is a willful anachronism when used to describe the period before gay liberation—but instead looks to trace the exclusion of queers, women, and others from art history to the very way in which modernist ideology is constructed against these figures. As Paul B. Preciado has argued: “Considered in the context of defining new techniques for producing sexual difference that characterized Central European biopolitics in the late nineteenth century, queer, kitsch, camp, and cursi, signal all that which exceeds the ‘new’ masculine figure of the virile, white, heterosexual man. The modern male, the true protagonist of the public space and political life, but also social player and artistic producer, is sketched out in disciplinary terms in opposition to the queer, cursi, the romantic, Baroque, the Oriental, domestic, southern, fetishist, sentimental, childish, feminine, the crazy, and the mannered.”4
The McCausland and Abbott collaboration is one part within a long period of research through which we have found many other fantastic, albeit marginalized and mostly devalued contributions by women to modernity. These significant yet neglected contributions form the content of our major forthcoming exhibition at John Hansard Gallery in 2019. In the framework of this project, a focus on the Abbott/McCausland collaboration is seen within the context of the editorial collaborations between Jane Heap and Margaret Anderson on The Little Review, the interior designs of Elizabeth Eyre de Lanux and Evelyn Wyld, amongst others.
This research then is driven by a queer-feminist interest and, as Jasmine Rault remarks, “its results poignantly represent both the presence and absence of queer histories, what theoretician Ann Cvetkovich describes as the ‘traumatic loss of history’ that marks contemporary queer subjects, politics, and publics.” Rault continues: “Despite over thirty years of ecuperative research to ‘prove’ the existence of queers in history (to prove that queers have a history) and to interrogate the place of sexual dissidents and dissidence in the cultural history of modernity itself, these histories and this field of scholarship and the contemporary art world are constantly on the brink of being lost.”5 We see our book project as an active statement against this ongoing and pervasive tendency of forgetting, marginalization, discrimination, and censorship.

¹ Jasmine Rault, “Losing Feelings: Elizabeth Eyre de Lanux and Her Affective Archive of Sapphic Modernity,” Archives of American Art Journal 48 (2009), pp. 56–65.
² Identity categories that, as Rault argues, made “these lives and identities less likely to be read as chic, avant-garde, and modern than degenerate, dangerous, and lesbian.” Ibid., p. 59.
³ Modernism and its male proponents and protagonists have been intensely revisited within the fine arts in the last two decades.
4 Paul B. Preciado, “The Ocaña We Deserve: Campceptualism, Sexual Insubordination, and Performative Politics,” in Ocaña, ed. Pedro G. Romero (Barcelona: Ediciones Polígrafa, 2012), pp. 412–38.
5 Rault, “Losing Feelings,” pp. 58–59.