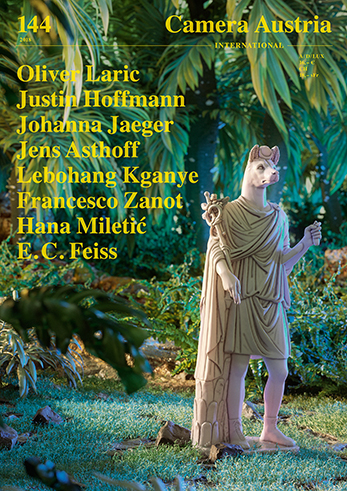 In his work, Oliver Laric relies on processes of 3D modeling. Using this 3D method, he often lends form to sculptures based on ancient statues or reliefs. Yet these works only partially encompass his artistic activity. First, Laric creates a comprehensive, self-rendered archive of 3D scans that he provides, free of charge, to other persons on his website as well as on professional platforms like Turbo-
Squid. So “various levels of research, publication, and distribution” complement the scanning of the original objects, as Justin Hoffmann writes in his essay. This enables the artist to function °“as a mediator of material for other cultural producers.” With this approach, Laric contributes to a further democratization of the medium of photography, which is shaped by its reproducibility, quick accessibility, and transformability.

Johanna Jaeger also engages with the borderline areas of the photographic. In her series, she focuses on their origins and media-related premises. It is from varying perspectives that her interest revolves around the question of how photography develops, which forms it assumes, and how it may transform itself. At the heart of this interest are those processes situated between preparation, capturing, and fixation of a shot. Jens Asthoff views the aspect of time as one of the central characteristics of Jaeger’s series: “She develops her artistic work with a view to a core property of photography, its role as a (reproductive) temporal medium. . . . The artist’s characteristic visual language revolves around fluid-ephemeral aspects, such as clouds, color gradients, and the processual dissolution of form. She explores phenomena of light and exposure or thematizes solid-sedimented facets. . . .” These reflections are continued in the presentation form of Jaeger’s carefully balanced exhibitions.

Lebohang Kganye extends her photographic practice into the performative, including the staging of three-dimensional spaces. Her family’s photo albums serve as a point of departure for the exploration of her own biography and also for her probing of photography as a medium. In Kganye’s series “Ke Lefa Laka: Her-Story” (2013), pictures of her mother are superimposed with spectral-like self-portraits in which she wears her mother’s dresses. In later works, she re-creates various rooms seen in the family albums in the form of miniature stage sets and here allows the people depicted in the albums to encounter “real” people. This way of uniting the past and the present leads the evident nature of photography ad absurdum, as Francesco Zanot explains, for despite their presence in the same image, the figures only contingently meet: “Despite the testimonial value of her imagery, she does not come to any overall conclusion, but only to more or less credible hypotheses unleashed by fragmentary pieces of information.” Hana Miletić uses photography as a medium for orientation while surveying social realities, calling her artistic practice, in which she documents her surrounding environment, “Street Photography.” Yet these explorations also include other mediums, with Miletić availing herself of a broadened photographic space and creating textile objects through processes that are at times collaborative.

For E. C. Feiss, “the suppression of the photograph in service to material . . . constitutes both the statement of the work’s politics and its critique of photography. . . . The documentary particulars of the photographs are transformed in their conversion to textile, where social detail is recorded but equally withheld, absorbed by the composition dictated by the weave.” Taking effect in Hana Miletić’s “Street Photography” are, not least, social aspects and collective participation in the artistic process. For example, her work “txt, Is Not Written Plain” (2017) was created during a residency at Globe Aroma in Brussels, where she developed felt objects together with a group of women.

This issue marks the conclusion of the “Revolving Bookshelf” section initiated by Jan Wenzel, which has been accompanying Camera Austria International since 2013. With each coming issue, we were just as curious as our readers about which books the co-publisher of Spector Books would select for his comparative analysis. However, we are also excited that, starting with the next issue, Erik van der Weijde will give us insight—through a series of interviews—into the making of (photo) books from the perspective of artists and publishers.

As the year comes to a close, our subscribers will find, as usual, a poster insert in our magazine—this time designed by Sophie Thun, whose work we were pleased to present in Camera Austria International No. 142, framed by a text by Orit Gat. She developed a pop-up exhibition with us at Fotohaus Arles of the ParisBerlin>fotogroup. Now she is bringing part of this, for us, highly fruitful exchange back into the space of the magazine.

Cover: Ondrej Zunka, Rendering for Camera Austria International No. 144 based on a 3D scan by Oliver Laric.