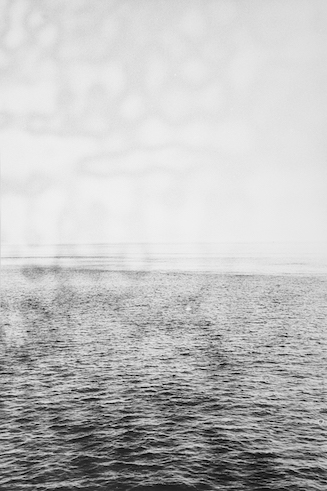 This exhibition is the second in a series of three presentations in addition to the regular 2021 exhibition program.

We have become accustomed to the transience of (digital) photographic images. They are created everywhere, without really being planned or designed; they circulate, disappear again, or are stored for an indefinite period of time in various clouds all over the planet. Their capacity for manipulation seems boundless, and such pictures apparently want little more than to highlight our daily routines or an event here and there, in order to be able to “share” it. Although we are well aware that their production and dissemination are associated with considerable technological effort, and based on a whole range of conventions that are constantly changing, their existence is felt to be unobtrusive and really quite “natural.”

Benjamin Jones, by contrast, works solely with analogue photography and in black and white, enlarging all of his photographs himself in the darkroom. They are not elusive phantoms on data carriers that have to be materialized before viewing; his photographs are a material practice from the outset. Jones demonstrates—through, and with, his work on photographic images—what must come together in order to create these images in the first place: movement, place, perception, camera, darkroom, paper, chemicals, craftsmanship, bodies, time. Photography is still a complex dispositive of knowledge and execution from which the pictures emerge and to which they remain tied. And this dispositive stays inscribed in the photos by Jones: they show traces of handling, emulsion flaws, imperfections in development, fluctuations in contrast—the resistiveness of the materials used cannot be fully controlled.

Yet it is precisely such uncertainties that Jones bases his practice on. The artist creates paper negatives which in a further step, he cuts and arranges in different superimposed layers to create works in the series Binder (2019–ongoing). In a new series, he uses large-scale paper negatives originally created through this process, that produce forms reminiscent of the Binder series. Each of these versions is not only an image, but also an event—a unique constellation of employed materials, light, and time, which is in turn interpreted through a new constellation.

On this level of concrete objecthood, the geometric constructions meet the images of reflections, windows, mirrors, shadows, and views. Here, too, transience and transparency are apparent, and also lighting conditions, all of which can be read as photographic traces. It is often hard to tell at first glance what is even pictured in these—equally fragmentary, cropped—images; and their degree of representational merit, in turn, is taken to the limit in the darkroom by controlling the contrasts, with the images “meeting” the cutout paper negatives. This limit is also where the dispositive of photography comes to light and becomes recognizable, where Jones makes the dispositive of photography legible for us. He uses no hidden tricks. His means of production are exhibited within the pictures themselves. Thus, photography remains what it has always been: a construction, a cultural technique, a constructed surface, an object.

Jones shows us not only things and processes, but also what photography does and how it goes about doing so. What decisions are involved in the production and dissemination of the photographs? Who makes these decisions, and which organizations oversee them? If we have long been dreaming of immaterial images, then why must so many people in so many countries of the Global South mine so many mineral resources under inhumane conditions to get them? What does the dispositive of digital images involve? What must come together in order for these transient images to circulate? What conflicts and contradictions do they generate? And what can one kind of (analogue) image say about the other kind (digital)? What can they demand of each other, and how might they continue cross-referencing?

Benjamin Jones (b. 1994 in Reading, GB) is an artist based in London (GB) who studied photography at the Bath School of Art and Design (GB). He was a Styria-Artist-in-Residence in Graz (AT) during 2019 and a graduate fellow at Spike Island, Bristol (GB), from 2016–17. Further, he is participating in an ongoing project with Gonzo Unit, Thessaloniki (GR) which will lead to a residency in 2022. Upcoming and recent projects include: The Actual Life of a Thought (2021, Loom Gallery, Milan, IT), Nothing, Like Something, Happens Anywhere (2021, Camera Austria, Graz), 4 frogs (2021, DUM projects space, Ljubljana, SI), Analogue Processes (2020, Antonini, Milan), Shades of Grey (2020, Galerie artepari, Graz), Glashaus (2019, Schaumbad – Freies Atelierhaus Graz). Jones’s work was recently published in the catalogue Glashaus and a conversation between the artist and Reinhard Braun entitled “Nothing, Like Something, Happens Anywhere” was presented on Camera Austria’s website in 2020.