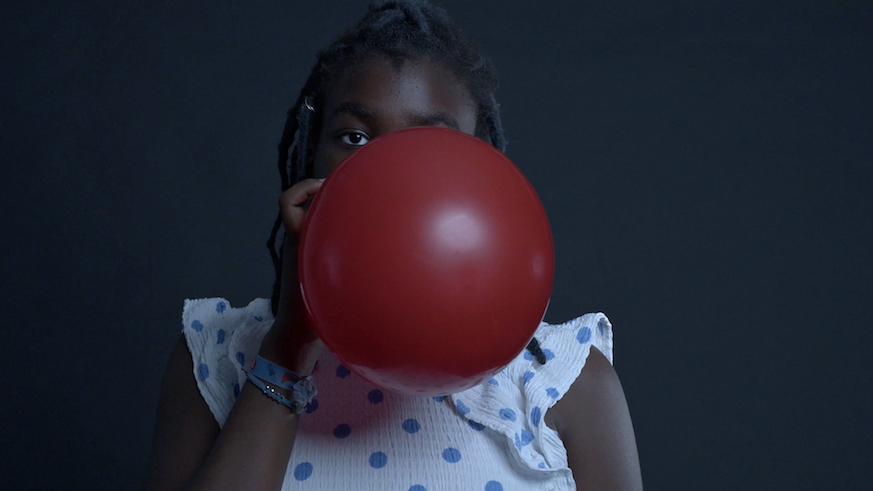 decolonization / requires / acknowledging. / that your / needs and desires / should / never /
come at the expense of another’s / life energy. / it is being honest / that / you have been spoiled /
by a machine / that / is not feeding you freedom / but / feeding / you / the milk of pain.

“What could decolonization even look like?,” Belinda Kazeem-Kamiński said in a conversation we had, which was followed by many. Kara Keeling, cultural theoretician of African American descent, whose writings are an important reference point for the artist, in turn wonders: “Can we even speak about decolonization or are we not rather speaking of imaginations of decolonization?”1 While we did not attempt to answer the first and bigger question, we both instinctively knew that release is central here. A loosening, and stretching out as in taking space, a relief of forms of alienation we didn’t anticipate yesterday, joy, agency, liberation.

Through seven bodies of work, Seven Scenes is an attempt to respond to these questions. They are fundamental to Belinda Kazeem-Kamiński’s extensive artistic practice in highlighting what isn’t told and visible within hegemonic narratives. Here, she pinpoints, respectively, the personal and the collective experience of breaking free—what is it to be fully liberated? She invites us to look back and commemorate what was once celebrated and was a moment of hope, from liberation struggles or movements to Pan-African solidarity. We will not forget what was carved by our ancestors for what was to come today—the exhibition is a piece of memory reminding us vividly of the red, black, and green colors that unite us. The stories of yesterday are the tools for today and the answers for tomorrow.

With energetic and strong movements, her fists are up and down, up and down, and in turn going sideways as she recreates the first letters of the sentence “Kill The Cop Inside” in the performative video Untitled, K. T. C. I. (2022). The work is inspired by the radical dramatist Augusto Boal, who worked extensively on developing techniques against internalized oppression. It is a signal of awakening, where the racialized body is the first portal of communication. A swift shift is required from a clear message that submerges us, in the quotidian, here, there, and everywhere where we cannot escape a vision of direct violence, neglect, and injustice toward racialized bodies. Those that can or cannot breathe—breathing as an act of resistance, spatial breathing as an activator of radical communion and speculation of Black futures. Kill the cop inside as a breathing practice.

Kazeem-Kamiński’s exhibition moves in waves through and beyond linear times in sites of personal and collective processes, through a visual repetitive regime: a back and forth of Pan-African flag and Black liberation flagship colors. The exhibition is an ode to the future in the liberation of Black folks in which the three colors red, black, and green reflect on the synchronicity of struggles for freedom across times—a self-cartographic exercise of affirmation and solidarity.

It draws on the importance of “radical diasporism and transnational connections”2 in which we are given the necessary space for dialogue and communion. Kazeem-Kamiński’s practice is one that is embedded in methodology, playing the theoretical and aesthetic role of a connector offering spaces of radical instances, following on the genealogy of the Black Radical Tradition with a focus on Black feminist practices. The exhibition medium translates as the visual outcome from the text—theoretical grounding in practice. What you see is what was traced in writing.

Breathing Is Resistance: A Rehearsal Toward Liberation
Seven Scenes is a radical act: a rehearsal space to imagine, think, speculate, dream, and organize together. It is a collective process of collective understanding, a soft space in which we’re invited to breathe in communion with one another, to remind ourselves that there are spaces within spaces in which we can pause and contemplate. Spaces that invite us to rethink the act of breathing, one that isn’t always given.

Kazeem-Kamiński is the theatrical metteuse en scène who or­chestrates the smooth rhythm, at the tempo of spatial breathing. Her directions are playful and alternate in revealing and unrevealing what is a never-ending process of experimentation that unfolds in the space in its artistic arrangements—working with openness, all throughout. Seven Scenes gives the time and space for consideration. It is a rehearsal space for Black agency as a practice of being together—a communion that isn’t always granted. The idea of communing as an energetic practice of resistance is key.

In rehearsing the future toward liberation, Belinda Kazeem-Kamiński takes us toward an idea of liberation that stems from Black radical thought and tradition, in which her subjectivity becomes, as H. L. T. Quan says, “unavailable for governing.”3 Doing so, through a visual and experiential process of enunciating, breathing, denouncing, and (re)claiming space in an environment that systemically doesn’t allow for our existence. In the reference mentioned, Quan also touches on the legacy of ungovernability, such as marronage, proving the existence of Black radical consciousness and practice. Through her practice, Kazeem-Kamiński offers a space to continue on this tradition through a sensuous dialogue.

“What kind of spaces are they imagining? And where is a community to think and build with?,” asks Kazeem-Kamiński in one of three statements included in the two-part piece Openings (2022). The exhibition brings instances of resistance practices and emotionally situated moments of multisensorial contemplation that capture you viscerally, that are invasive as felt in the gut without any warning. If you know, you (will) know.

A hum is a sound made by producing a wordless tone with the mouth closed, forcing the sound to emerge from the nose. To hum is to produce such a sound, often with a melody. It is also associated with thoughtful absorption, “hmm.” A hum has a particular timbre, usually a monotone or with slightly varying tones.4

Tina M. Campt introduced her book Listening to Images (2017) with the metaphor of humming, in reference to her father humming a beloved song as he grieves the loss of his wife, the author’s mother. The hum is an active practice of remembrance, a haptic connection to the ancestor, and in other words the long-lasting ghost presence that is never to be forgotten and imprints itself in the body’s memory. For Campt, the hum is “this exquisitely articulate modality of quiet . . . that moves me [her] toward a deeper understanding of the sonic frequencies of the quotidian practices of black communities.”5 This analysis of the humming is then followed by Campt introducing her key reflection on the ability to listen to images, their contexts, their noises, and therefore their deepest conditions. She asks the viewer to adopt a responsible gesture when listening to an image, instead of simply looking in order to capture the alternative narratives of Black subjectivity from that perspective and as a practice of refusal and dispossession.

Sound is a transnational and diasporic connector that is foundational to Black Atlantic cultural formations, where (sonic) freedom of expression has been and continues to be essential. The sonic reverberates in our ears, wherever we locate ourselves. The sound of humming is a coded language that plays the role of a soft protest from the inside. In the exhibition, you are witnessing a provocation, an intrusion within the deepest place of your soul through its vibrations. The melodic humming envelops the space of a healing sound. In Untitled, Keep On Keepin’ On (for Nile) (2022), Kazeem-Kamiński performs iterations of Curtis Mayfield’s “Keep On Keeping On” from the album Roots (1971). Humming, alongside loud breathing, takes over the space as a soulful atmosphere of hope.

The language of breathing connects with one another, across time and space, when living a life under subjection. Breathing is “the groove we resound in life, on the brink of stolen breath, is (un)bound in the reflexive potentiality of breathing. It is this musicality of breathing in and out—expansion and drawing in—that allows for the transmutation of what is through listening.”7

When Can Black People Breathe? (2022) is an open question on the poster whose color echoes red, black, and green. Multiple points of connections gravitate. In Respire (2022), a video piece in which local Black folks are breathing into a red balloon, their faces are partly or entirely revealed and unrevealed by the blow. Breathing demonstrates Black life—breathing is a right. Respire is inscribing the discourse within the local context of Graz, Aus­­­tria, and also, importantly, Europe. The condition in which the precarity of Black life still stands, the withnessing and witnessing8 of (Black) breathing is a remembrance of those that no longer do, as they die(d) at the hand of state violence: Marcus Omofuma whose “breath was severely restricted,”9 Richard Ibekwe, Johnson Okpara, Edwin Ndupu, Yankuba Ceesay, Essa Touray, Cheibani Wague, and more.

The piece reflects on the political right of breathing collectively, as a communal effort grounded in the need to denounce and resist and practice “ungovernability.”10 It is about finding ways to escape the ongoing increase in state power, quotidian surveillance, control, and violence toward those who are racialized and marginalized. The work is about building connections in this fight.

In Seven Scenes, all of us are joining this exercise of breathing: to breathe through others and demand reparation through breathing. Breathing into something, together with the breath-gatherers in the exhibition and other subjectivities that are invited into the space. It is a reflection on the many possibilities to imagine, rethink, unlearn, transmit, share, exchange, remake, rebuild—in a vision for (a) liberative future(s). Somehow within spaces within spaces within spaces (and so on), following a long tradition of struggle, where a sense of freedom is reached at a level that can allow for subtle communing and fugitivity. Here, Seven Scenes is a gift.

Belinda Kazeem-Kamiński is a writer, artist, and researcher based in Vienna (AT) whose works manifest through a variety of media. Rooted in Black feminist theory, she has developed a research-based and process-oriented investigative practice that deals with the condition of Black life in the African diaspora. In the process, she interlaces varying spaces and temporalities, thereby resisting a clean-cut separation between documentary and speculation.

Cindy Sissokho is a curator, cultural producer, and writer with a specific focus on intellectual, political, and artistic aspects of decoloniality within the arts and on culture. Her curatorial practice is nurtured by the urgency to broaden and disseminate epistemologies and cultural production from systemically racialized and marginalized perspectives.

Belinda Kazeem-Kamiński wishes to express her gratitude to Cindy Sissokho, interlocutor and fellow thinker. Our conversations provided fertile ground for what became visible. To Nicola Lauré al-Samarai who has inspired so much of what started growing here. To Alessandra Ferrini and Emma Wolukau-Wanambwa for having my back. To Martina Berger and Nina Höchtl for envisioning and putting everything into perspective. To Christina Simmerer for supporting the production process. To the best crew: Sunanda Mesquita, Bassano Bonelli Bassano, Liesa Kovacs, and Nick Kovacs. To the team of Camera Austria for inviting me into their space, most of all Reinhard Braun, Angelika Maierhofer, and Christina Töpfer. This is for the community of breath-gatherers in past*present*future.