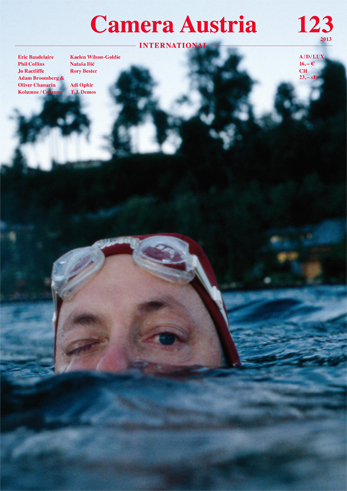 In Camera Austria International 123 we explore the question how decisive the (grand) narratives and the (individual) stories can be in the perception of images and how, conversely, pictures manipulate perception and the “establishment of truth”.
Eric Baudelaire’s photographs, videos, and installations work with documentary and archival material, that is, with existing pictures and text, with strategies that may be localised somewhere between photo-essayism and anthropology. His focus is on the power of images and on constructing the self through ideologies, myths, and histories. The projects “The Makes” and “The Anabasis of May and Fusako Shigenobu, Masao Adachi, and 27 Years Without Images” as thematised in Baudelaire’s contribution tie into the ancient narrative of Xenophon’s Anabasis. Anabasis serves as both a background and a metaphor for the representational-critical questions addressed by Eric Baudelaire through the stories of his figures, which are associated with the issues of resistance, violence, and terrorism.
The point of origin for the contribution by British artist Phil Collins are his piece “marxism today (prologue)” (2010), and his work “use! value! exchange!” from the same year. In these works, Collins hones in on the lives of teachers from the former German Democratic Republic who taught the subject “Marxism-Leninism” and traces their lives after the ball of reunification started rolling in 1990. Collins combines archival material about teaching methods with his personal experiences. He uncovers layer after layer of his protagonists’ personal memories, convictions, and inner conflicts while operating under the assumption that all forms of teaching are ideologically charged, regardless of the systemic parameters. The artist combines these filmic works with pictures from his piece “free fotolab (Berlin)” (2010), an image archive that has evolved (and continues to do so) from the free development of 35mm-camera pictures in exchange for the image rights.
Jo Ractliffe, in her much-heralded work “As Terras do Fim do Mundo”, has documented the residuals of the war that raged at the border between Angola and South Africa in the 1970s and 1980s. Together with former soldiers, she returned to the battlegrounds, where today literally nothing at all remains visible. Rory Bester, head of the art history department at University of the Witwatersrand in Johannesburg, writes about the special concept of “landscape as pathology” that is apparent in Ractliffe’s work. Coming together in Ractliffe’s photographs is the mythos of conquering and reconquering a country, the reclamation and ravaging thereof, the oppression and freedom. The landscape itself becomes a metaphor for the freezing of incidents. Yet of these events little remains seen, and they can hardly be reconstructed in image form.
A new artist’s book project by Adam Broomberg and Oliver Chanarin is at the heart of their contribution. By reprinting the book of all books, the Bible, the artists have covered the Old Testament with images obtained from the London “Archive of Modern Conflict”, which may well be the most comprehensive collection of photographs portraying violence, catastrophes, and the asininity of war. Their selection vicariously represents the horror and madness of global (wartime) catastrophes, but also our apathetic reception of the images that have swilled through mainstream media thousands of times. The project moreover reflects an attempt to visualise one of the pivotal theories put forth by the Israeli philosopher Adi Ophir. He asserts that God primarily manifests in (inflicted) catastrophes and that the power structures or justification strategies operating within the Bible correlate with those of modern governmental systems.