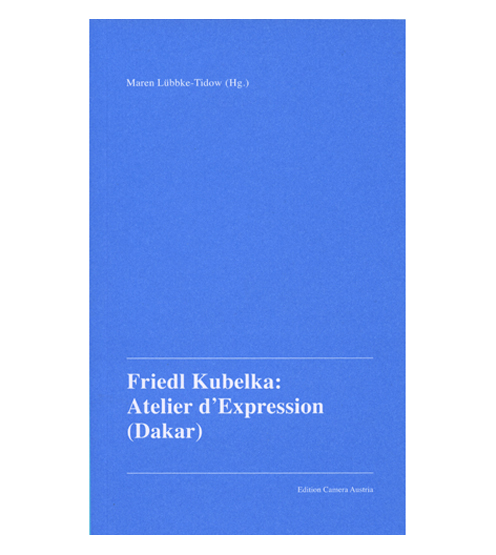 “Friedl Kubelka: Atelier d’Expression (Dakar)” introduces the artist’s most recent work. Reflection on her own role as an artist, which is related to the decision to increasingly withdraw her previous artistic work from the systems governing the art market, coincides with Kubelka’s interest in people who are engaging in artistic activity while remaining outside the dominant establishment. The exhibition by Friedl Kubelka is devoted to these so-called “outsiders” and their art. As Hubert Fichte before her, Kubelka visited the FANN clinic, a psychiatric institution in Senegal, which encourages patients to engage in artistic activity in its “Atelier d’Expression”. Kubelka’s work includes photographic portraits of the artist-patients and a film about them, complemented by artwork created by the individuals featured. Becoming visible here, too, are Kubelka’s own (travel) experiences and the different levels of encounter with the city of Dakar and related structures.
Kubelka’s extensive portrait works are time-cuts in the space of encounter between the artist and the person across from her; they speak of interplay among proximity and distance, of moving towards and away, or even deprivation. Perhaps they even speak more of the performance of encounter than actually presenting a picture. The manipulative potential permeating her portrait sessions is especially evident in her films. The artist meets her protagonists with humour, devotion, or sometimes even with dispassion. Stirring and touching unspoken norms without violently breaching them—this is the incredible strength yet also vulnerability of this oeuvre, which cannot be termed documentary since it rather works with the special happening nature of the image.
In the current portrait works it was important to the artist to maintain the integrity of her counterpart, and also to preclude the moments of derailment that repeatedly arise in her work—while especially (or once again!) making sure to not show these expectations to the person being portrayed. Here we see no “outsiders”. This ascription does not apply. Her protagonists are serious and tangible/unassailable. Their expressions or poses give no indication of an identity disorder. At times, art utensils like a paintbrush give an indication of their self-conception as artistically engaged individuals. Otherwise we—like the artist Babacar Gaye (called Papis), whose face is largely covered by the grass in which he is resting—are left alone in the thicket of our diffuse perceptions of the people whom Friedl Kubelka came across in Senegal.
On the other hand, the exhibition speaks of different experiential levels owing to travel to a country that provokes a wealth of projections and ascriptions. The artist works with the inner and outer contradictions leading her through the country, and she lends visual form to these contrasts in photographs of architecture and urban structures, of their own seductive beauties and very real precipices. This approach gives rise to a work that begs to be read from a political vantage point but instead consistently homes in on the plane of the artist’s personal experience. This engenders disruptive moments. In hearing the word “Africa”, we become alarmed—and are wary of generalisation, whitewashing, commiseration, glorification, or compassion. We demand clarity, objectivity, knowledge, information, vigilance, and principles. The artist may know in all of this, but: such an expectation does not impact her visual work. Kubelka purposefully does not brush aside the common existing projections in order to arrive at an adjusted image—rather, through her pictures, she reveals herself to be a traveller and stranger who is guilty/innocent, knowledgeable/ignorant, open-curious/anxious-full of shame. Only one thing is vital: anything goes.
The book accompanying the exhibition assembles various texts—penned by the artist in relation to her works, an introductory text by Maren Lübbke-Tidow about the exhibition, an essay on “Citizens of the Virtual” in Senegal by the Senegalese philosopher Adama Diouf, an essay on so-called “Outsider Art” and those who create it by the Viennese psychoanalyst Georg Gröller, and a reprint of Hubert Fichte’s “Psyche” about the artist Papisto Boy, whose work was also encountered by Friedl Kubelka in Senegal.
Friedl Kubelka’s “Atelier d’Expression (Dakar)” illustrates the obduracy that, both on the level of art production and that of exhibition production, is not content with “common sense” but rather makes use of subversive thought and action, pushing forward into new spaces. (Text excerpt by Maren Lübbke-Tidow)

Excerpt from: Adama Diouf “A Brief History of our Representations of Europe and the Europeans through the generations. Senegalese Point of View”*

A new democratic era, in the nineties, allowed thousands of Senegalese to leave their suburbs and villages for the appealing cities of Europe and America. But this new generation of migrants, belonging to “Les Misérables”, didn’t care about European architecture, painting or literature. They didn’t want to know about Museums or Theaters. They just wanted to offer their working force, earn a living and improve the welfare of their families remaining at home. Unlike the “Decolonizers”, they didn’t want to compete with the Europeans. They just claimed a part of their economic riches to share it with their kin.
To tell the truth, the courage and the boldness of this generation transformed our country more swiftly than the quest of civilization and culture of the “Decolonizers”. Our cities and villages changed amazingly thanks to the sacrifices of “The Wretched of the Earth” (Frantz Fanon). Who cannot be marveled by these illiterate coming back from the western world to their hometown, like prodigal sons, full of presents, naming and telling the realities they discovered in foreign words they would never have learned in their own countries? They changed the face of their cities and villages but the more impressive is how they changed themselves and their people. They opened the Global Village to the generations of the XXI century who were ready to conquer the new frontier and to be enthusiastic citizens of the Universal.

2000: The citizens of the Universal
In a sense, our regretted president prophecy was fulfilled. The globalization seemed to announce his long-predicted Civilization of the Universal and in the year 2000, Dakar, our capital, had become a big city. Alas, it was not like Paris but rather like all the concrete jungles of the Third World countries.
The late superstar Bob Marley, in a wonderful song, revealed to us, like only artists could do it, what is life in these cities for the youth of the Wretched. In the concrete jungle, “the living is the hardest” but
“you’ve got to do your best”; “No chains around [your] feet but[you’re] not free” because it’s a place of “illusion” and “confusion”. You’ve “never known what happiness is” but you believe that “life (sweet life) must be somewhere to be found”.
This marvelous song could be the hymn of all the sons of the Wretched seeking desperately for a place to achieve their dreams.
Unfortunately, despite the promises of a new era of mobility and openness brought by their elders, the doors of European Eldorado will be closed very soon. Their dreams and aspirations will be drowned in the depths of the ocean or buried in the dunes of the desert.
Instead of being the proud “Citizens of the Universal”, the heirs of “Les Misérables” are the victims of an endless tragedy.  They are the “Citizens of the Virtual”. They have the right to watch through the social networks and the medias but they cannot neither participate nor enjoy the show behind the screens.
Yet they have proven their proximity, solidarity and understanding to their peers in the Northern side. They are dress like them. They are thinking and talking like them.They create the same music  and are listening to the same song. They have the same superstars and heroes. What else do they need to be invited to their orgies?

*Original unpublished version of the text, which has been translated into German for publication.