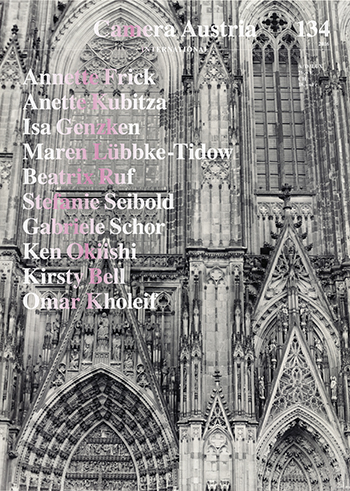 The artists introduced here are connected by the radicality of their thought and action, as well as by the way in which they subvert and overcome visual conventions. The flickering visual appearances of their image worlds refer to specific aesthetic experiences and aesthetic knowledge. Everyday contemporary cultural surface aesthetics are just as much a critical and seductive point of reference for them as the discourses on purity and canonised art scholarship. They explore new forms of permeability, persevere in zones of transition, and with gestures ranging from provocative and extreme to camp, they sensitise the viewer to other, hybrid contexts of perception.
Annette Frick comes from the punk movement. As an artist with a feminist agenda, she focuses mainly on the portrait form. In a photographic project that has been working stubbornly against the establishment for a good twenty years, she has accompanied a group of people living in Berlin in niches outside of heteronormative orders who have attained an understanding of self with flamboyance, decadence, glamour, and carnivalesque travesty despite or precisely because of all the historical and present-day critical factors standing in the way of their definitions of self. Anette Kubitza spoke to the artist about her work.
In its visual expression, Stefanie Seibold’s latest sculptural and photographic work can be clearly attributed to Post-Minimalism. A closer look makes it clear that she’s proposing a new formal vocabulary resulting from her aim to consider queerness beyond all discourses around the body. Indeed, her interest is far more radical: she separates queerness from the body entirely, and in doing so, succeeds in addressing the political agendas of queer theory in an entirely new way. Gabriele Schor talks to Stefanie Seibold about her work.
Ken Okiishi explores the hybridity of the digital surfaces dominating our Internet-based everyday life. He works with a form that doesn’t necessarily critically reflect upon the transience of the electronic dissemination of information, but that first of all asserts a material pictorial quality. An approach to his work initially takes place through the image as a posited aesthetic appearance; delving into the deeper layers of his screens brings about a demystification of canonised knowledge. Kirsty Bell spoke to the artist about whether or not his mannered works can also be understood as melancholic or camp gestures directed at the art establishment.
Similarly to Ken Okiishi, Isa Genzken’s work directly addresses contemporaneity and its everyday aesthetic appearances. Over the past several decades, more than most, her work was and continues to be ever-present as a constant and (productively) unsettling undercurrent. This year’s exhibitions in Amsterdam and Berlin have once again brought about a change in the reception of her work; the artist is celebrated widely. Beatrix Ruf discusses the reasons behind this marked shift in reception, what it says about the present day, and what new connections come to the fore when we view Genzken’s work.
The School for Artistic Photography in Vienna, founded by artist Friedl Kubelka, has been in existence for over twenty-five years: more than enough occasion to dedicate the Forum to this school. Its director, the artist Anja Manfredi, has selected six young artists.
I’d like to thank the artists and authors for their collaboration on this edition of Camera Austria International, as well as Reinhard Braun and the editorial team for inviting me to give it its thematic contour as guest editor.