The exhibition is accompanied by an eponymous publication in the Edition Camera Austria. 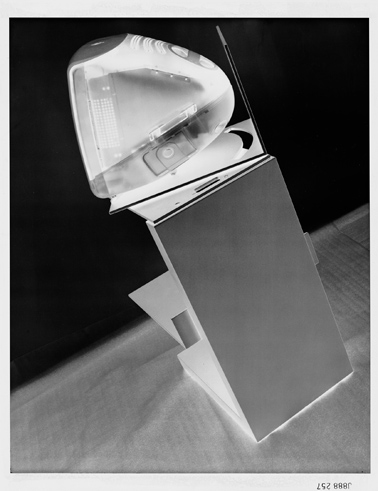 Traces of the light of a streetlamp at night against an empty wall of the studio (“Lichtfelder,” 1996), the detail of a cover over an existing electrical installation in the studio, pictures from a surveillance monitor (1997–98), an office cabinet by Jean Nouvel, likewise illuminated by the light of the streetlamp shining into the studio (“Less,” 1998), all photographed with Polaroid TPX radiographic slide film, some negatively inverted. A commissioned sample strip of the office cabinet shows a detail selected by the printer which, due to an input error, is developed at a length of 4 meters rather than the intended 40 centimeters. Slides of this accidentally created “Bande test 1” (1998) were then in turn digitalized and processed on a computer. This data formed the basis for further processing—stretched horizontally, they for instance gave rise to a ten-meter-long “Bande test roll” (2002). Also, pictures of these prints were made, released upright in wave form, seeming like a drawing (“Naked Ilfochrome,” 2004) or in interlaced lengths of paper randomly tossed down (“50m ILFOFLEX,” 2007–09).

Visible in these pictures are sometimes strangely unsettling, architectureish, monochrome, or graphic forms. In most cases, we can hardly determine what we are actually seeing, and often it is even more difficult to describe. Yet it would be premature to call these photographs abstract, though in a certain way they are nothing less than abstract, all harking back to an analogue technique and developing method in photography, even if they are at times subjected to an additional digital work stage. In “Less,” for example, the studio itself becomes a camera, as it were; the parquet floor is discernible, and hovering above it are irritating, white, striated surfaces, occupying different angles and different surface areas within the black-and-white photo. The office furniture added later dances in the series just as peculiarly through this black-and-white pictorial space, tilting back and forth in various positions. Something seems to be pictured here which is still not fully defined through these images, which cannot be fully controlled through the depiction process, such as the loops of the “50m ILFOFLEX” series.

This perhaps describes the first boundary navigated by the work of Tamara Horáková and Ewald Maurer: directives defined as precisely as possible in terms of procedure yield unexpected and unforeseeable pictorial formations. Something is rendered, as if spontaneously, self-actingly inscribing itself, constructing an image that is as concrete and literal as photography tends to be, also in terms of the time that these pictures take to manifest. Yet it is for this very reason that this certain “something” eludes the photographic process and, as appears to be even more important, “it” does not translate itself into conventions of representation. One could also describe it as if one were setting in motion photographic processes that lead of their own accord to an image while, at the same time, eliminating from this process those moments that would be attributed to a continual production of meaning. The artists themselves speak of “heteronomous fields of agency” for legitimating photography (Ruth Horak, in: 21 Reportagen, 2008) that increasingly define them and superimpose and reshape photography as a process and production method. The random or uncontrollable could also represent a strategy of exposing everything prior to the image, everything that leads to the image and that is usually concealed or absorbed by the image itself, by its appearance, its narrative, through that which can be seen on the image, lending itself to recognition, that which is obscured or absorbed.

“Order No.: Spirale_Negativ, Customer: Horáková + Maurer, Job: Photo paper_30m, as marked on one of the exposures by the Durst Lambda printer working at a photo lab in the Swiss town of Marly, filling the orders by Tamara Horáková + Ewald Maurer. File Size: 243.2 MB, Contrast: Contraste Ilfochrome, and other data about the digital production process are recorded there and remain in place on the finished image. The tiny block of text can be read as a kind of subtitle revealing an essential aspect in the work of Horáková + Maurer, namely, the issue of how their images are produced and the place where the materials and processes originate.” (Ruth Horak, Werkschau XI [Fotogalerie Wien], 2006)

This manner of labeling images anchors them in their production process, rather than in their perception or in an ascription related to what they might represent (about which Horáková + Maurer could all too easily deceive us). Instead of actually showing something, the print documents a production process to which not only the technique, the materials, films, and chemicals, or the printing processes themselves belong, but also the respective arrangement or configuration in which the artists brought this technique, the devices, and the materials. In this sense, they generally emphasize the constructed character of photographic images, that which must come together in order for a picture to take form, or that which may be compiled in ever new constellations.

They intervolve the production and reproduction processes so strongly that the photographic images basically arise at the crossroads between the two, as a superimposition, an interference, sometimes even a disturbance. These images render an object, even if only as detail, enlargement, or through the transfer process. Yet they simultaneously engender the object as a result of the processes applied, in a way so particular to photography. What can a medium accomplish? What does it do? How can it be handled?

As such, Horáková + Maurer not only work along a special boundary where the determination of the photographic image is put to the test. They also lead the photographic images themselves to a borderline: to a border of representability and, more importantly, to a border where the relationship between photography and representability becomes brittle, or at least questionable. Perhaps, with this, Horáková + Maurer are also showing how photography as a whole, and very fundamentally, is determined by this border, or that photography as a medium fundamentally probes such borders.

Or maybe it deals with a manner of meta-images, images about images, displaying a kind of “pictorial self-referentiality” (W.  J.  T. Mitchell, Picture Theory, 1994), which basically “speak” of an ever-precarious being-image, which “speak” of a fragile becoming-image, which in any case deprive the image of its implicitness—presently growing with each hour—as a method of reference, representation, identity formation, and communication. The autonomy that Horáková + Maurer claim both for their practice of image production and for the status of their pictures (Ruth Horak, in: 21 Reportagen, 2008) likely has to do mostly with the fact that the images are not constantly defining (and surely even legitimizing) themselves via a detour of representation, but most especially through their status as (photographic) images.

Considering Tom Holert’s words written in 2008—“Images, both representational and nonrepresentational, must first be furnished with intentions and meanings that reduce the constitutive multifunctionality and ambiguity making them useful; prior to that, they are not visible as images” (Regieren im Bildraum, 2008)—the images by Horáková + Maurer would be invisible as such. Perhaps precisely because of their claim to the autonomy of being nothing other than images? Yet expressed here is also how visibility is a contested territory, as it were, permeated by power and conflicts, by hegemonies of knowledge and meaning production, by disputes about what may be considered useful. It is also at this juncture that the question of the politics of the images by Horáková + Maurer is addressed, when they situate them at another boundary, namely, the border of the production of visibility itself or of the potential visibility (or perception) of a particular image production.

In fact, many of their works have received their chromaticity or their formal arrangement from objects, architectures, surfaces, or even concepts that are themselves highly politically connoted (such as in “BUFET,” 1993; “VÁCLAV HAVEL, Prezident,” 1990, or “2RUN,” 1988). However, the political in art—another main aspect in the work of Horáková + Maurer—is not drawn from the art contents being political; it is rather due to the fact it determines “a specific form of experience coinciding with or departing from other forms of experience” (Jacques Rancière, Die Aufteilung des Sinnlichen, 2006). The political found in art mediums thus lies in the change of relations among the forms of the sensible and the regimes of meaning ascription, rather than in what is actually visible. In that Horáková + Maurer employ photographic processes in order to engender images that intervene in precisely these regimes of meaning ascription or that make these regimes themselves visible and thus also question them, by refusing them, or by removing (conventional forms of) meaning creation from their pictures, they touch the political facet of the images itself, through this shift in what might be understood as representation and through a change in the modes of perceiving photographic images. Walter Benjamin phrased this—as always, in an inimitable way, though in a fully different context—in 1931 as follows: “to make use of elements of reality in experimental rearrangements” (“The Author as Producer,” 778). The way in which Horáková + Maurer design their image production as experimental rearrangements (of processes, mediums, and the representational) easily identifies it as work with the elements of reality, which in turn transcend the realm of the photographic.

Yet the idea here is certainly not for the pictures by Horáková + Maurer to once again make accessible, via a back door, those “heteronomous fields of agency” for legitimating photography or to once again formulate their readability in concepts of showing and representing. It is precisely the unfamiliarity of these images, their heterogeneity, the difficult-to-describe beauty, the radicality of formal reduction, the alienation of the representational, the distance that these images maintain or even establish toward the viewers, or their ambivalence through which they withhold access.

Ultimately, this allows a kind of poetics of the process to be perceived or at least conceived: Horáková + Maurer avail themselves of photography and engage in photography by viewing it—as far as this is possible—from the outside and, along the way, allow photography itself to have a chance to speak/show, as it were. The pictures document something that happens to the image as image, something that appears to originate deep inside—assuming that this notion makes sense—rather than playing out along its surface. In this sense, the practice of the artists is simultaneously a (rudimentary) system of reference and literal inscription, at the same time theoretical and as concrete as possible, both real and autonomous. With this practice, they have for years now assumed an independent position of at once thinking and showing photography.