If Time Is Still Alive
The City & The Good Life 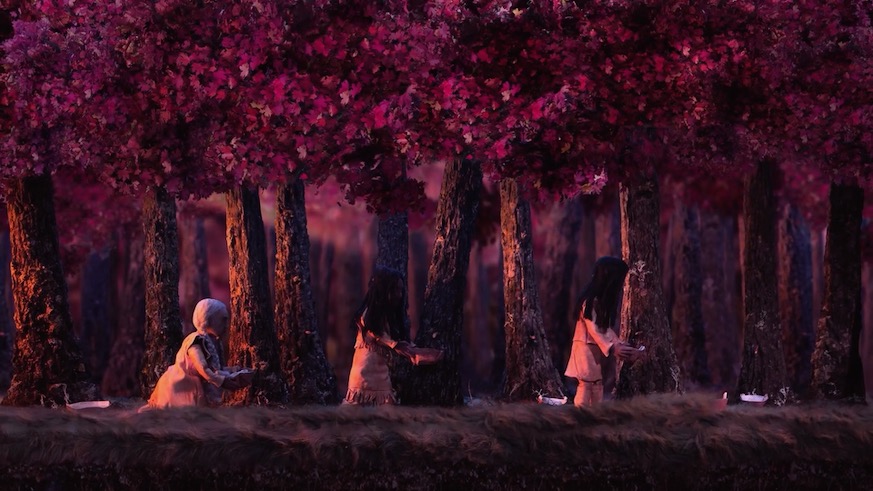 We share time. We lose time. We find time. We use time. We take time. We get behind time. We need time. Yet time is never truly ours, even though we live in and through it. Since the triumphant perspective that saw only an unbroken trajectory of capitalist economic expansion, this narrative of the present and the future has been challenged, and time itself has come under critical and artistic scrutiny. A singular concept of time as a linear progression has been challenged by reinvigorated ideas of revolutionary time, of Indigenous temporalities, of Afrofuturism, of time lived by nonconforming bodies, of comrade time, of non-clock time, of public time—and all manner of temporalities that break from the imperatives of a time geared to regulate and contain the rhythms of life or drive an extractive economy. Time itself has become a site of struggle.

Today, we see new spatiotemporal struggles born from the contradictions that the Covid-19 situation has made more tangible, more felt, through the pressures and limitations on our time and prescription of space. We are to maintain a mandatory safe space between each other even as other spaces and times are collapsed, folded into each other. The relationship between flexible spaces of work and life has become more and more dominated by work, and this rewrites the fluid spaces of the domestic and the social. Further, the time regime of work is now the time regime that we must hold to in our own domestic spaces. For those without work—and Covid-19 has added to these numbers—finding work now takes more time, so “unemployment” is actually more time intensive. The extractive economy takes our time as it reworks our spaces.

What first felt like a spatial shock—of social distancing, of the closure of spaces—now has the impact of a temporal shock. We have been told that there will be a “new normal,” and this will no doubt be a new temporal normal. But will this temporal shift in regime add to the quality of our lives and open up opportunities for “the good life” that time can allow? For what good are the spaces of the good life if we have no time to use, enjoy, and transform them? While we can see the effects of the spatial order of the pandemic on cities and publicness—with the distancing of bodies, the closing of shops and restaurants, et cetera—how does the temporal order become visible and understood? The good life, and the life of the city, is now a question of both time and space.

Out of this unstable social context, the exhibition asks, in general, what new forms of time, what temporal practices and ways of being, already exist within or under what Elizabeth Freeman has called °“chrononormativity”? And what new forms of non-hegemonic time might emerge? Will the long-promised reconfiguration of time and life and work materialize in a way that will make more life possible, perhaps even a good life, a better life? Will artistic practices and the practices of those at the margins of time be able to create chronotopes—connections between space and time—that make these new time-space relations visible in their importance for public life, politics, and society?

Central to these questions, in the wake of the dramatic collapsing of temporal forms into a single one designed to keep the economy healthy, is the possible emergence of an experience of public time that positively builds on the temporal cracks and folds. Is there an opportunity for public time to fulfill the promises of public space that have been blocked by design, by financialization, by privatization and its hybrids, by policing, by surveillance, and by the imperative of consumption? Can the right to space, the right to the city, be reimagined as the right to time? Can the right to a good life also be the right to imagine and live a different rhythm, a different time?

Just as the concept of the good life is not universal, the elements that might make up a good life are also not necessarily shared. In an analysis of data from the Better Life Index, which is regularly compiled by the Organization for Economic Cooperation and Development (OECD), the global Pew Research Center found out that even among the relatively rich countries of the OECD, an unevenness in the elements of the good life emerges. Framed by European philosophy, Judith Butler points out that, “In fact, we might conclude rather quickly that, on the one hand, ‘the good life’ as a phrase belongs either to an outdated Aristotelian formulation, tied to individualistic forms of moral conduct, or, on the other hand, that ‘the good life’ has been too contaminated by commercial discourse to be useful to those who want to think about the relationship between morality, or ethics more broadly, and social and economic theory.”¹ This framework cannot be forced onto the film Biidaaban (The Dawn Comes) (2018) by Amanda Strong, which more readily aligns with mino bimaadiziwin. Leanne Betasamosake Simpson defines this Anishinaabeg concept as “living life in a way that promotes rebirth, renewal, reciprocity and respect.” In mino bimaadiziwin, “there is no dichotomy between ‘the good life’ and the ‘bad life,’ rather living in a good way is an ongoing process.”² In the film, the settler-colonial temporality and the model of a good life based on property, which literally blocks access to the land in the film, is overturned to show a configuration of time that is more relational, with the separation of past and present collapsed.

Afrofuturism also presents a foundational challenge to European concepts of time and forms of living, or the possible good life, that temporality allows. For Robin D. G. Kelley, Afrofuturism is a political and poetic act of the imagination, an emancipatory vision that rises to “discover the many different cognitive maps of the future, of the world not yet born.”³ The works of the Black Quantum Futurism Collective (BQFC), a collaboration between Camae Ayewa and
Rasheedah Phillips, opens up a Black radical time through chronopolitical acts of listening, of community organizing, and by, as Phillips writes, “new communal temporal dynamics.” BQFC opens portals to another past and another future through a transgressive critique of the present, a present which is closed through the racial imaginary of white supremacy.

The focus on temporal community dynamics that have taken shape during the Covid-19 period drive the contributions from Ultra-red and the School of Temporalities. Ultra-red’s practice of political listening reflects social engagement and is an act of sincerity for the communities they work with as well as the everyday experiences and the political contexts that shape the experiences for those communities. The questions that inform this manner of organized listening come from the concerns of the communities that Ultra-red works with, and crucially this militant sound investigation rejects the binary of passive hearing and active listening and the binary of the artist and the audience or community. The process of engagement that Ultra-red uses not only takes time; it also investigates how social structures shape the temporalities experienced by different communities. The question “What is the sound of the good life?” can be answered through the act of listening to the present and the temporalities of the everyday within the Covid-19 moment.

Similarly, the School of Temporalities, as a fluid collaboration, is investigating the gendered experience of time within the Covid-19 moment. By conducting interviews with women from different communities, with different jobs and varied experiences of temporality and space during our shared pandemic period, their artistic research will gauge how women’s lives have been altered by this moment. This research will also show the counter-temporalities that are being built up, and how new rhythms of being together and social living take shape.

Just as all of the works in If Time Is Still Alive counter a concept of time as unilinear, Eva Egermann’s work compellingly points to the experience of non-normative bodies within a regime of “ability” that is temporal. It is unfortunately easy to see how the world is designed for normative bodies and how many physical barriers this sets up. Less easy to grasp is how the regime of time—or chrononormativity—affects bodies that do not conform to the temporal notions of productivity, of development, of movement, of rest that are a part of what Mel Y. Chen calls “global economic time,” a temporality through which “ability” is understood. 4

This exhibition recognizes the role that art plays in producing and directing public space. Following on this crucial challenge, If Time Is Still Alive shifts emphasis to how art can enact other times and create a public time that may in turn reshape the present and the future. This exhibition also recognizes the power of the representation of ways of being together—perhaps a next step in thinking about the good life—that artistic practices can create alongside or in concert with other collective practices. If there is a new temporal regime emerging, then how can it become lived socially and be visible artistically?

Leanne Betasamosake Simpson is an influential writer, artist, and independent scholar using Nishnaabeg intellectual practices. Her books include Islands of Decolonial Love (2013), As We Have Always Done: Indigenous Freedom through Radical Resistance (2017), and Noopiming: The Cure for White Ladies (2020). She is an off-reserve band member of the Alderville First Nation and lives in Peterborough, Ontario (CA). Amanda Strong is a Michif interdisciplinary artist who lives and works on unceded Coast Salish territories, also known as Vancouver, British Columbia (CA). She is the owner/director/producer of Spotted Fawn Productions.

Black Quantum Futurism Collective, based in Philadelphia, Pennsylvania (US), is an interdisciplinary collaboration project between Camae Ayewa and Rasheedah Phillips. Camae Ayewa is a poet, visual artist, activist, and musician who works under the stage name Moor Mother. She also co-founded the music festival ROCKERS! Rasheedah Phillips works as an attorney for the Community Legal Services of Philadelphia. She is a founding member of The AfroFuturist Affair and the Metropolarity Queer Scifi Collective.

Ultra-red is a transnational network of artists who build and share a common radical politics based on audio activism, or “militant sound investigation,” as well as generative protocols for working within communities organizing around public housing, health, education, queer politics, anti-racism, and migration. Using pedagogical methods of listening to interrogate social conditions, struggle, and other modes of collective processes, Ultra-red’s work draws on the traditions of musique concrète, conceptualism, popular education, and militant inquiry in their development of protocols for organized listening.

The School of Temporalities is a collective artistic research project. Presently based in New York City (US), Maja Bekan is a co-founder of the Rotterdam-based (NL) artist initiative Area for Debate and Art (ADA). She received an MFA from the Piet Zwart Institute, Rotterdam, and the University of Plymouth (GB) in 2008 and has exhibited across Europe and North America. Annette Krauss is an artist, educator, and writer whose collaborative initiatives disrupt the taken-for-granted truths in theory and practice. As an artist, her conceptual-based practice addresses the intersection of art, politics, and everyday life. She is based in Utrecht (NL). Julia Wieger lives in Vienna (AT) where she works in collective approaches to research, knowledge production, and design. Her research and practice focus on queer feminist productions of space, the politics of archives, ways of living, and history.

Eva Egermann, an artist, writer, and researcher, lives in Vienna (AT) and works in a wide range of media and collaborations. Her process-based practice includes curated exhibitions, such as On Uncanny States and Bodies (2013), and publications like Crip Magazine (2012–ongoing) and Class Works: Weitere Beiträge zu vermittelnder, künstlerischer und forschender Praxis (2009). Egermann is a doctoral candidate at the Academy of Fine Arts Vienna.