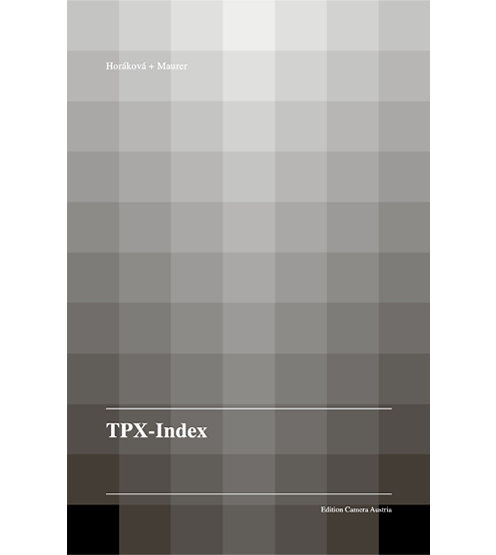 The works published for the first time in this book go back to the years 1996 to 2000, when Tamara Horáková and Ewald Maurer started intensively exploring the properties of Polaroid TPX radiographic instant film, which lends the project its name. It is an exposure technique originating from the medical field or security sector, which sees through the things and pretends to represent a certain truth of things. In this way, Horáková + Maurer open up a “game” involving methods, representation, perception, and readability that situates the photographic images at the threshold of their representational possibilities. Along this boundary, the relations between photography and renderability become unstable and are subjected to an experimental probing. The artists intervolve the production and reproduction processes so strongly that the photographic images basically arise at the crossroads between the two, as a superimposition, sometimes even a disruption. In this respect, their practice is at once as theoretical and tangible as possible—and with this practice, they have for years now assumed an extraordinarily independent position of thinking and showing the photographic in equal measure.

Traces of the light of a streetlamp at night against an empty wall of the studio (“Lichtfelder,” 1996), the detail of a cover of an existing electrical installation in the studio, pictures from a surveillance monitor (1997–98), an office cabinet by Jean Nouvel, likewise illuminated by the light of the streetlamp shining into the studio (“Less,” 1998), all photographed with Polaroid TPX radiographic instant film, some negatively inverted. A commissioned sample strip of the office cabinet shows a detail selected by the printer which, due to an input error, is developed at a length of 4 meters rather than the intended 40 centimeters. Slides of this accidentally created “Bande test 1” (1998) were then in turn digitalized and processed on a computer. This data formed the basis for further processing—stretched horizontally, they for instance gave rise to a ten-meter-long “Bande test roll” (2002). Also, pictures of these prints were made, released upright in wave form, seeming like a drawing (“Naked Ilfochrome,” 2004) or in interlaced lengths of paper randomly tossed down (“50m ILFOFLEX,” 2007–09).
The works published for the first time in this book, shown between March and May 2018 in an exhibition at Camera Austria, go back to the years 1996 to 2000, when Tamara Horáková and Ewald Maurer started intensively exploring the properties of Polaroid TPX radiographic film, which lends the exhibition its name. It is an exposure technique originating from the medical field or security sector; an exposure technique which sees through the things that, in this sense, pretends to represent a certain truth of things, that unveils and exposes the hidden, while at the same time removing essential aspects of these things, such as their color.
Visible in these pictures are sometimes strangely unsettling, architectureish, monochrome, or graphic forms. In most cases, we can hardly determine what we are actually seeing, and often it is even more difficult to describe it. Yet it would be premature to call these photographs abstract, though in a certain way they are nothing less than abstract, all harking back to an analogue technique and developing method in photography that claims for itself a certain continuity within the world of things, from light to surface to film to photo paper. The things inscribe themselves through this continuity, with everything remaining objective, palpable, material, a script of things, as it also remained inscribed in photography theory well into the 1960s.
In “Less,” for example, the studio itself becomes a camera, as it were; the parquet floor is discernible, and hovering above it are irritating, white, striated surfaces, occupying different angles and different surface areas within the black-and-white photograph. The office furniture added later in the series dances just as peculiarly through this black-and-white pictorial space, tilting back and forth in various positions. Hardly identifiable objects appear on the control monitors, scattered as if by chance. The disorder and arbitrariness of the material world seems to manifest itself in these pictures, which at times appear to be a hallucinogenic and spiritualist apparition of this material world—elusive, an elusive fixation that stands in contrast to the extremely long exposure times. Time is of essence, much time, in order to wrest the images from these things. Something seems to be pictured here which is still not fully defined through these images, which cannot be fully controlled through the depiction process, such as the loops of the “50m ILFOFLEX” series.
Everything seems to revolve around a precarious relationship between the things and the images, things that are endangered to evade their becoming-image in the very moment of exposure, a kind of touchless touch that allows “something” to be transformed, converted, an instable connection, an excess of exposure time that leads to a minimum of representation, a delay, a postponement, a contradiction between seeing and the image, the intensification of a long moment.
This perhaps describes the first border navigated by the work ofHoráková + Maurer: directives defined as precisely as possible in terms of procedure yield unexpected and unforeseeable image formations. Something is rendered, as if spontaneously, self-actingly inscribing itself, constructing an image that is as concrete and literal as photography tends to be, also in terms of the time that these pictures take to manifest. Yet it is for this very reason that this certain “something” eludes the photographic process and, as appears to be even more important, “it” does not translate itself into conventions of representation. One could also describe it as if one were setting in motion photographic processes that lead of their own accord to an image while, at the same time, eliminating from this process those moments that would be attributed to a continual production of meaning.