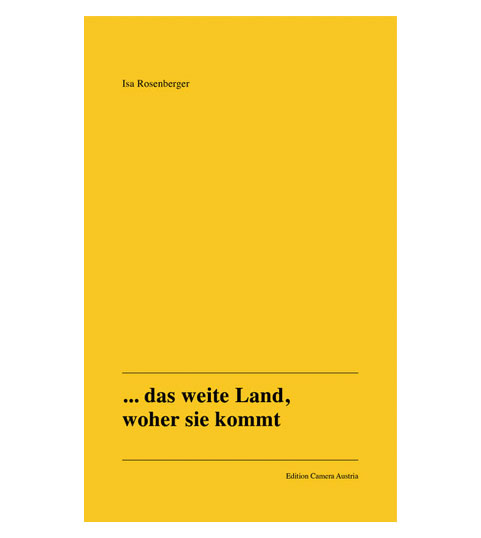 The installation by Isa Rosenberger revolves around material that we know much too little about. The point of departure for her artistic research was a dance performance held on Sunday, April 29, 1934, at the Volksheim Ottakring—as the adult education center was called back then (today: Volkshochschule Ottakring), which still today complements the academic field by offering essential classes to the general population.
The program booklet, which Isa Rosenberger discovered in the Austrian Archives for Adult Education in Vienna, announced an evening of dance by Gertrud Kraus and her group, with a performance of the dance play “Die Stadt wartet” (The City Waits). Starting with this moment, the artistic work follows the material, poses questions that Rosenberger can answer through research, and consistently pursues those questions that do not permit a final response with their gaps and contradictions remaining open. So we hear about a relatively unknown text by Maxim Gorki and its adaptation as dance performance; we follow the history of Gertrud Kraus, a dancer and choreographer who influenced expressive dance; in the process, we encounter a chapter from Vienna’s history of dance that was strongly supported by women, substantially by Jewish women; we divine a sliver of meaning of the avant-garde history of Vienna’s adult education, but also of everything that is missing since all of this came to an abrupt end because of the Nazis, putting a stop to the writing of this history. Indeed, we also encounter a migration history, a history of fractures, of exile, and of new beginnings, which in turn gives us insight into the Zionist history of dance. . . .
A series of photographs, showing recent shots of the performance artist Loulou Omer on the historically preserved stage of today’s adult education center, provides an introduction to the topic. Together with Loulou Omer, who was born in Tel Aviv and has been living in Vienna since 2016, Isa Rosenberger has found a way to touch on material that makes something understandable precisely by leaving more questions open than it answers. . . . The series refers to the dance performance “Die Stadt” (The City) by Marcel Rubin, which had its theater premiere on March 5, 1933, at the Volksbildungshaus Stöbergasse under the title “Die Stadt wartet” (The City Waits) with a related text by Elias Canetti, before being shown on April 29, 1934, at the Volksheim Ottakring. The piece itself, in turn, took a fairy tale by Maxim Gorki as its starting point. The topic was the city of the 1930s, and thus the piece was shaped by appeal, light, and dance, by unemployment, hardship, and surging violence. Isa Rosenberger discovered the music and lyrics of the piece, so we know that the first of the work’s nine compositions bears the title “Der Knabe auf dem Weg in die Stadt” (The Boy on his Way to the City). Rosenberger also came across the short fairy tale by Maxim Gorki titled “Musik der Großstadt” (The Music of the Big City) and photographed its four pages so that we can read the story. The fairy tale speaks of a boy who is coming closer to the big city. It actually tells of a musician who wants to compose music about a boy who is setting off for the big city. While against the background of the “vast land from which he comes” everything seems dangerous at first, the city becomes more and more attractive the closer he gets. It veritably calls out to him. The fairy tale ends with the musician noting, with a pensive smile, that this—the yearning and the anticipation—“of course cannot be put to music.” Indeed, what can be rendered of that which is left behind and that which is still to come? Naturally, precisely this happened after all. And with great success. Gertrud Kraus’s expressionistic staging, in which she herself took on the role of the boy, was obviously “full of momentum and ecstatic vision,” as we read in the booklet announcing the event at the Volksheim Ottakring, along with how the premiere had been met with great interest. A press report is cited: “It went beyond brilliant choreography to even become spatial poetry.” But how can reference be made to such spatial poetry today? With Gorki’s musicians, we almost wish to ask: Can it be transferred to visual art? And, most pertinently, how can a masked history be written without overwriting that which cannot be reconstructed? These questions lead us back to the photographs, to the present-day adult education center, to Loulou Omer, and to the main video of the installation. . . .
The camera pans across the empty rows of seats, the avant-garde triangular stage of the historical auditorium, which still today exists at the Ottakring adult education center and remains in use. A piano is positioned in front of the stage. Loulou Omer, dancer and musician, who is already familiar to us from the series of photographs, plays the first notes of the piece and tells a story, her own story. No historical documents exist that might be able to give a visual impression of what the performance in 1934 looked like. So Loulou Omer takes the music of the dance piece and the text by Canetti, along with historical accounts and photographs by Gertrud Kraus, as an occasion to bring it into the present and understand it.

Nora Sternfeld is an art educator and curator. Since January 2018 she is documenta professor at the Kunsthochschule Kassel (School of Art and Design Kassel, DE). From 2012 to 2018 she was professor for Curating and Mediating Art at the Aalto University in Helsinki (FI). Furthermore she is co-director of the /ecm – Master Program in Exhibition Theory and Practice at the University of Applied Arts Vienna (AT); part of the core team of schnittpunkt. ausstellungstheorie & praxis (AT); a co-founder and part of trafo.K, Office for Art, Education and Critical Knowledge Production (Vienna); and since 2011 a member of freethought, a platform for research, education, and production (London, GB). In this capacity she was also one of the artistic directors of the Bergen Assembly 2016 (NO). She publishes texts on contemporary art, exhibitions, politics of history, educational theory, and anti-racism.