Press preview
27.5.2020, 11 am
on registration only:
exhibitions@camera-austria.at

Book presentation and exhibition tour with the artist
7.7.2020, 6 pm 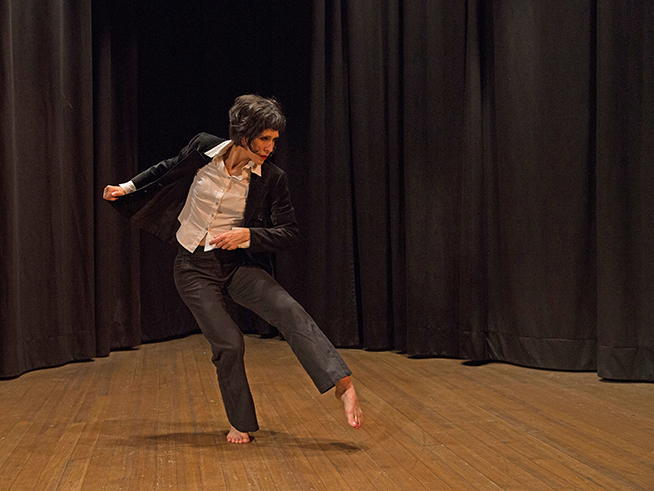 In May 2019, Isa Rosenberger produced a series of photographs which showed the artist and dancer Loulou Omer dancing, singing, and playing the piano, while simultaneously responding to what Omer was performing on the theater stage of the Volksheim Ottakring in Vienna (today the Volkshochschule Ottakring). Not only was the series capturing moments of spontaneous creativity, but whole stages of Rosenberger’s extensive artistic research elided into this performance. These moments revealed the bodily experience communicated as political medium through an interdisciplinary artistic approach, rooted in the methodology of Gertrud Kraus. Kraus was a Vienna-born expressionist modern dancer, choreographer, and teacher1 who directed both a company and a school first in Vienna, and then later in Tel Aviv after having fled the Nazi regime in 1935.2 She founded the Israel Ballet Theatre in 1950–51 and was the first director of the dance department of the Rubin Academy of Music in Jerusalem (today the Jerusalem Academy of Music and Dance).3 The ways in which the bodily experience and movement were impulsively organized, structured, and performed respond to the possibilities and challenges of existing political, social, cultural, pedagogical, and psychological conditions. In this context, the substantial performance of Omer was at the same time a challenge—as an ode to Kraus and to the legacy and narrative of her personal history; to her venture of reconstructing and bridging identities in new terrains; and to her artistic approach as a form of resistance and as a possibility of expression.

Rosenberger’s work speaks to this legacy by newly contextualizing, challenging, and questioning history vis-à-vis the realities of the present. Her precarious approach enables the recognition of different perspectives and possibilities by also articulating muted, suppressed, lost, and forgotten histories. Her practice—and also her artistic strength—is based on a composite net of personal narratives and historical findings, while creating discursive platforms to articulate urgent social concerns with a feminist slant. Hence, her engagement with social issues coincides with Kraus’s artistic approach. As the writer and scholar Henia Rottenberg puts it, “characterized by a search for self-expression that was associated with deep social consciousness and humanism, her works resulted from her profound personal identification with struggles for social justice.”4

During her research, Rosenberger discovered that, in 1934, the theater stage of the Volksheim Ottakring in Vienna presented Kraus’s dance play “Die Stadt wartet” (The City Waits, 1933), which was based on Maxim Gorky’s fairy tale “Musik der Großstadt” (The Music of the Big City). The work consists of an introduction and nine pieces of music composed by Marcel Rubin, with connecting words by Elias Canetti: “The Boy on the Way to the City,” “The Choir of the Suffering City,” “Dawn,” “Enlightenment,” “Amusement,” “The Unfinished City,” “The Dream of Happiness,” “The Boy Among People,” and “Expectation.” Her choreography reflected on the journey of a young boy to the city, on his fear of and fascination with discovering and experiencing a big city—Gertrud Kraus herself danced the role of the boy. Kraus’s work was a groundbreaking inspiration for Rosenberger; it had a strong political standpoint while touching upon identity politics, not only through her resistance to the pressures of her Jewish identity, but also her confidence in addressing gender-based inequalities. Therefore, revisiting and exploring Kraus’s venture from different perspectives suggests a resourceful viewpoint for Rosenberger as a response. However, as a historical lapse, there is no visual document capturing the performance of the dance play “The City Waits” at Volksheim Ottakring. Thus Rosenberger’s project is an attempt to reflect on this lapse. Two documentaries on Kraus presented in the exhibition, which Rosenberger produced with dance historians Andrea Amort in Vienna and Ruth Eshel in Tel Aviv, focus on these aspects in more detail.

Furthermore, Rosenberger also conducted parallel research on Volkshochschulen (adult education centers) and their shifting significance over the course of a century. The Volksheim Ottakring in Vienna (founded in 1901), where Kraus performed on stage, carried significant cultural and political importance, especially in the interwar period. In the archives of the center, the founding idea was described as follows: “Workers, citizens and university lecturers founded the Volksheim association as a place of higher academic education and rich artistic enjoyment for the broad strata of the working people,”5 with the motto “teach people to think.”6 Important protagonists of Viennese modernism—such as Ernst Mach, Adolf Loos, Josef Hoffmann, Marianne Hainisch, Elise Richter, Lise Meitner, Eugenie Schwarzwald, Otto Neurath, Alfred Adler, Robert Musil, Hermann Broch, Jean Améry, but also dancers like Rosalia Chladek or Gertrud Kraus—held lectures, gave courses, or danced and played on the stage of the Volkshochschule Ottakring.7 The stage where Kraus once danced still exists today.

Taking Gertrud Kraus’s dance play “The City Waits” as a starting point, Rosenberger revisits and recontextualizes the forgotten social reform history of the Volkshochschule Ottakring by tracing the footsteps of Kraus. The project unfolds the discipline of dance as a specific poetic space in which art forms, times, and images intermingle with both new and cross references. Hence, by following the interdisciplinary working methodology of Kraus, Rosenberger has organized a set of workshops with young migrants attending the Volkshochschule Ottakring today. Both the workshops and Rosenberger’s extensive research on Gertrud Kraus, conducted in Vienna and Tel Aviv, reflect an inquiry into geographical movements and a migration of thoughts that follow spiral routes across countries: for example, the migration of expressionist dance from Austria to Palestine8; or the migration routes of the workshop participants from the Middle East and Africa to Austria. For instance, in her rehearsals and classes Kraus combined German, English, and Hebrew, which reflected her migration experience and was described as a “multilingual lexicon.”9 Accordingly, Rosenberger asked her workshop participants,10 who also mix many languages while communicating, to express themselves and their migration experiences through storytelling, dancing, singing, and drawing. Throughout these workshops, she has echoed Kraus’s interdisciplinary approach by connecting different accumulated experiences, feelings, and hopes through various artistic expressions across and beyond geographies, people, and time.11

In the closing chapter of her project, Rosenberger collaborated with Loulou Omer, whose mother Zipora Lerman had been Gertrud Kraus’s student in Tel Aviv. This collaboration resulted in a video piece and a series of photographs which interlinked all mentioned elements of Rosenberger’s research. The video appears as the final result of a work in constant expansion and reflects the progress of artistic research and practice over the course of two years.
Omer is a dancer, choreographer, composer, poet, and pianist. Her practice—similar to that of Kraus—encompasses many art forms and approaches. Yet her migration was from Tel Aviv to Europe; thus, she has brought not only memories to Vienna, but also a knowledge of her mother’s versatile artistic approaches. Hence, Omer’s collaboration with Rosenberger also reflects the relevance of the inheritance of this knowledge handed down from mother to daughter.

Rosenberger chose the Volksheim Ottakring stage for Omer’s point of entry to her performance. She also enriched the performance and the video with Lerman’s photographs, as well as visual and textual documents. Grounded in Omer’s reflections on choreographing, singing, dancing, and recalling her mother and Kraus performing, the video renders Rosenberger’s elements of research. Echoing Kraus, Omer also used two languages and demonstrated various techniques and improvisations. She was portraying a strong and profound woman pursuing the complexities and contradictions of the ventures of Kraus, her mother, and herself. With each act she performed, each word she spelled, each note she played, and each memory she recalled, Omer’s world was being pictured. By responding to the heritage of Kraus as a migration journey in pursuit of search, responsiveness, and growth, Rosenberger invites the audience into this journey by entering Omer’s world. Once, Kraus wrote down a line into her sketchbook: “What’s the point of entry? . . . The point of no return . . .”12