Mara Novak: one to one goes one to ten

Afterwards Opening
Mara Novak
one to one goes one to ten 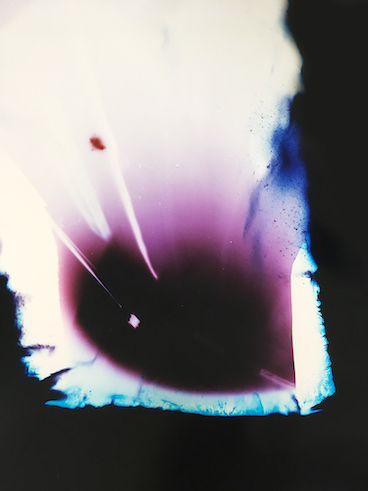 In the spatial installations by Mara Novak, we usually find ourselves in an “environment” that has facilitated and conditioned the actual photographs. The way in which these pictures materialize (exposure of photo paper on site) and other elements of this process of visual production (filter, models, lighting) engage with the images themselves. Whenever possible, the artist processes the photographs and tailors the presentation formats directly at the exhibition site. If this is not possible, then the rooms are measured, models crafted, and photo paper exposed in the studio setting. This approach to surveying and experimentally lighting the location or its translation in the studio—a kind of dual appropriation of the rooms—is a central aspect of her projects. It is a practice in and with specific spaces, a performance with elements related to photographic technology and chemicals, with the aim of claiming the space and utilizing it as a space of production. The exhibition space as studio? So if the pictures return to these rooms (assuming that they have even left them) and are presented in connection with architectural or installative elements, then we are situated with them in the very same space of their production and showing. Perhaps we are seeing these pictures under the same conditions in which they were created. But instead of carrying us off to far-distant worlds or events, they lead us back to the same place which partially defines their genesis, the place around which these pictures have always revolved.
At times, what is seen in the pictures themselves can hardly be determined, for it takes a lot of effort to discern—if there even is indeed anything there to discern. In any case, we can assume that the experience of exposing photographs on site will be equal to no other. Due to this experimental practice, something like a copy can only be very roughly produced as a variant. A fundamental openness toward each special result is vital—the same story might never be told two times in the same way. This precarious situation between control and unpredictability or the almost abstract nature of the resulting pictures—which are in fact nothing less than abstract, which are indeed concrete, very concrete—attests to a materiality related to the arrangement of light, of chemical processes, of bodies, their shadows, and their volume. It attests to regularities, but also to the uncertainties that go hand in hand with these setups and experiments. Thus, the pictures created in this way distinctly contrast with the many other images surrounding us today. These other images are all too familiar—trying to intrude, to draw our attention, to persuade us of their meaning, of their special nature or of the event they are referencing.
The persuasion of which the work of Mara Novak possibly “speaks” is something altogether different. She shows us that photography still remains a material practice, that the pictures have a concrete place in a concrete context, from which they cannot simply be removed or which cannot be altered at will. She shows us that the pictures are produced, woven into a chain of diverse practices, and can only be understood within this context of an image-based practice. She ultimately shows us that the pictures themselves still have a body, are rooted in a material, that they are based on a material, on a materiality, on an act of exchange, perhaps on a transfer, a transition. She shows us that these are different pictures than those “poor images” of which Hito Steyerl speaks, which are tramping around the virtual space of websites, being translated, transformed, converted, in order to haunt—as placeless specters of their very self—the endless worlds of a supposed information environment.
Mara Novak’s pictures are real—they are in the here and now, they are only here and now, they are situated with us in a room, with other materials in a room, are set it relation to this room and to us. They are presented on surfaces or mounts, they lie flat or are connected to these mounts, but never tightly. Such ensembles of photographs, materials, and objects always give an impression—despite being very obviously realized specifically for each concrete site—of being caught in an unstable state, as if they were ephemeral interventions. The entire arrangement is concrete, spatial, corporeal, material, yet simultaneously delicate, transient, tentative, questing. So for Mara Novak, the exhibition is a space of ambivalent presence and readability of the photographic images. If we refrain from expecting the world to be presented to us as a visual spectacle, trying to make us believe that we already know what we are actually seeing, then it is our task to open ourselves up to this ambivalence, this other kind of embodiment and performance.
The presentation “one to one goes one to ten” at Camera Austria concludes a process that began in spring 2018 with the exhibition “one to ten goes one to one” at the Gotische Halle in Graz. Since Novak’s photographs are usually developed and presented in concrete spaces from which they cannot be arbitrarily removed, as explained above, for the presentation at Camera Austria the artist newly “framed” some of the works created and presented at the Gotische Halle, both conceptually and materially.