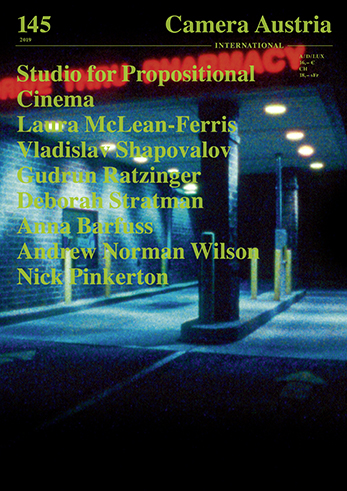 The contributions to the March issue of Camera Austria International probe the terrain between photography and cinematography; the themes of the artists introduced here range from the effects of historical photography and its usurpation for the causes of political ideology through the violent permeation of landscape and on to the initiation of a fictive dialogue between past and present.
Laura McLean-Ferris imbeds the multi-disciplinary work of the Studio for Propositional Cinema, which also uses performative formats, into the history of the camera; in the process, she analyzes the ways in which this work is closely tied to spatial configurations and to inscribing itself onto a specific place of presentation. She identifies the grammatical conventions the Studio for Propositional Cinema’s formal language is based on and demonstrates how artists, space, textual elements, and viewers enter into a relationship in the installations. The fact that these installations occasionally develop and change over a period of several days can be read as “a reaction to a climate of accelerating speed and consumption,” as the author writes.
Forms of presentation in space are also the subject of Vladislav Shapovalov’s project “Image Diplomacy” (2015–ongoing), in which the artist uses material produced by the Soviet Union for propaganda purposes. Using the example of the photography exhibition, Shapovalov demonstrates the function ideologically charged images assumed during the Cold War and the strategies and presentation formats used by the Soviet government to convey around the globe the most progressive image of socialism possible. “Ultimately, Vladislav Shapovalov asks not how things were in the past, but how we wish to deal with this past, and he suggests that not only the actual past is of importance for the present and the future, but also the unrealized opportunities, the potential,” as Gudrun Ratzinger concludes.
Deborah Stratman’s filmic work constitutes an approach that traces the political aspects in real and mental landscapes across the US. Together with her tension-laden, discordant audio tracks, Stratman’s slowed-down footage of the loneliness of threatening-looking, over-surveilled suburbs and shopping centers in the darkness of night, or the reenactment of scenes that suggest a predominantly white interpretation of the history of the nation, describe icons of American identity beneath the surface of which one often finds violent histories, ideologies, and patriotic traditions of which Anna Barfuss writes that “these appear both as the sediment of social relationships as they are lived, as places that reflect interior states, and as imaginary spaces connected to the circulation of media imagery in which concepts of identity are put to the test.”
In his work “KODAK” (2018), developed together with James N. Kienitz Wilkins from a wide range of historical and pop-cultural sources and biographical anecdotes, Andrew Norman Wilson relates connections between past and present, promise and disappointed expectation. In a fictitious dialogue, Rich, a blind former employee of the Eastman Kodak Company, speaks to company founder George Eastman; the results are unconventional narratives about photography. “The imagined dialogue of ‘KODAK’ is a confrontation between two contrasted figures: between distinct eras of American economy, between labor and management, and between rationalism and emotionalism,” as Nick Pinkerton describes this film by Wilson, who is interested in the structures of the “transition from industrial to informational labor.”