Stefanie Seufert: Wood Survives in the Form of Postholes 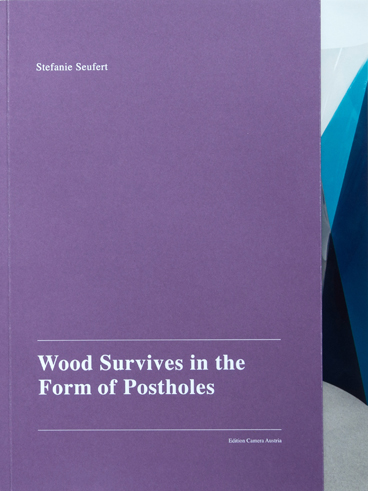 In close cooperation with the artist, the publication Stefanie Seufert: Wood Survives in the Form of Postholes has been released in the Edition Camera Austria and indicates the artist’s searching approach to the world of things that surrounds us. Let’s call it a release of aesthetic signs that—like postholes—are always somehow there and constantly surround us, but that produce no visibility of their own, but, on the contrary, seem to lead an existence of their own. The result is an archaeology of the present: seeing and studying things enlarged. Tied to the medium of photography, which claims universality, and that can, as Seufert shows, stand up to all critique of representation despite that promise.

We are very happy about our longstanding, ongoing, and multifaceted collaboration with Stefanie Seufert, with whom we have now already realized the second artist’s book. In 2012 we published Stefanie Seufert with texts by Florian Ebner and Christine Heidemann. 2010 the artist participated in the exhibition »Milk Drop Coronet« in Graz and one year later, she realized a main contribution in Camera Austria International, after she was chosen 2009 for the section Forum.

Excerpt from: Stefan Panhans, “Try ordering a simple COFFEE for yourself somewhere today!”

So, for example, various arrangements as if shot directly from above with a repro camera of flat, transparently translucent, potato-slice-like ovals—pastel-light-hued, seemingly completely disembodied, almost a bit like watercolour-like shadows of something, floating before a nearly neutral white. But shadows of what? It almost reminds me of … ? Exactly, the title then indeed says it: “Pringles”. But what kind of colours are those? When I look at them, what comes to mind is an image that I just recently encountered again—unfortunately not as a surely splendid original serigraphy, but instead as a small, low-res image in an online shop somewhere in the Web—namely by the painter Rupprecht Geiger, who made a name for himself in the 1960s and 70s with his colour field painting with, for the most part, jazzy colours: “Oranger Kreis mit gelbem Kranz auf weiß” (Orange Circle with Yellow Wreath on White) from 1971, which has quite beautiful parallels to Stefanie Seufert’s picture “untitled (Pringles #4)”. The colours here are therefore completely uncoupled from the object, totally unpringlelike; this is not photography as one is mainly usually familiar with, in which objects and/or scenarios are realistically (or should I rather say photo-realistically) recognisable. Raspberries and lemons, for example, have indeed not appeared in Pringles’ program of flavours thus far. But perhaps the ghostlike photo, which was possibly created in the lab as a photogram, anticipates something that lies in the very near future, perhaps precisely these flavours will indeed exist at some point in time, and indeed more quickly than we imagine? Just think about broccoli and garlic ice cream! Or the one with a brandy and sardine taste, and the beef ice-cream sundae, and Viagra ice cream (that’s not a joke, it all supposedly exists, at the Coromoto ice cream café in Venezuela, for instance). Okay, ice cream is ice cream, and Pringles are Pringles, and Venezuela is far away, but what is actually going on with the totally exploding number of new flavours and differentiations in product variants extending to all possible ramifications on ALL levels, in nearly all areas? What is it actually trying to tell us if even in the case of something like German beer, which still had an utterly unshakable-seeming conservative cultural image until twenty years ago, is suddenly available in everything from naturally cloudy URBIER in the age-old flip-top bottle design to trendy bonbon-coloured concoctions with some sort of fruit-taste additives and labels and bottles to match? Or quite particularly succinctly also in the case of COFFEE: Try ordering a simple COFFEE for yourself somewhere today!—With such a nerve-strainingly unspecific order, you will surely now only reap displeasure, a questioning lack of understanding, and/or tired pity! Or simply browse perhaps through the variants of just one single type of sneaker produced up to now by one single manufacturer: the Nike “Air Max 90”! The crass degree of almost hysterically boundless differentiation, whose point of reference, as the number in the name already says, is quite truly a retro number—the “original” is from the 1990s—that can barely be surpassed! And therefore, SO WHAT? DESIGN YOUR OWN INDIVIDUAL PRINGLES GENERATION! With this, I therefore already want to register, in black on white, the copyright on this theme park idea of the opportunity to individualise Pringles, and in addition, also on the two colours and flavours of Pringles Raspberry Dream and Soft Lemon!
Insofar, such a picture, in this case created as a photogram folded into itself, would potentially contain rather another kind of reality, a reality that would be difficult to achieve with a photo-realistic image, because it is situated somewhere below, above, or beside, not in what one really “de facto” sees. With the possibilities of a compacting abstraction, theoretically, what arise and are negotiated are scenarios or contexts that could be represented in another way than photo-realistically, but for this reason are not necessarily always less real-seeming.

The Western conception of history is that it has been characterized by manʼs increasing understanding and mastery of the physical environment, by the progressive triumph of mind over matter. The evidence of human history seems to confirm our sense that abstract, intellectual, spiritual elements are superior to material and physical things. This has led inevitably to a hierarchical ordering that informs our apprehension and judgment of human activities and experiences.¹

Although the text from which this quote comes is from 1982, and there has surely been some movement in this respect in the last thirty years, these clearly hierarchical cultural perspectives shaped by Platonic ideas nonetheless certainly still succinctly colour, more or less consciously, our thinking today, don’t they?