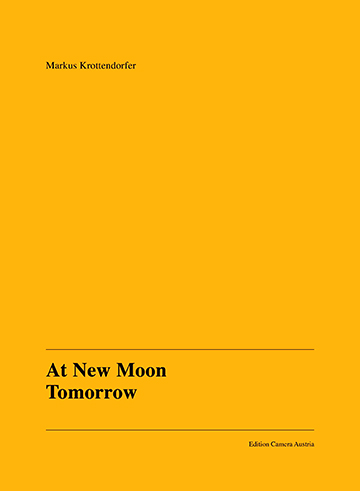 In his new project, Markus Krottendorfer shows interest in the manipulative moments of pictorial regimes, in questions related to artifice, invention, fabrication, and deception. An invented mountain range in Africa and a falsified skull found in Great Britain play a pivotal role here. Two seemingly unrelated circumstances that nonetheless share a common history: describing and classifying them, verifying their origins, and drafting their future, all from the centre of a fictional world. Instead of being motivated to set right against wrong, Krottendorfer seeks to reconstruct the power inherent to establishing the undecidability of this question. He avails himself of a manner of deception, remaining fragmentary, essayistic, associative, while employing the seductive power of aesthetics. In the context of other projects of recent years, the impression arises of a certain revival of the futility of occupying that place from which origins or certainty for the future can be viewed.

28 March
At new moon tomorrow it will have been four full months since we pitched camp here, and still no news from Paisley. He departed with over a hundred men and just as many porters, following the Mbambéré upstream, and was supposed to dispatch a message as soon as a ford had been discovered, or even the K’Onga mountains, which he and others considered to be near the source of the river.

13 April
Ever since I held the writings of the missionary Ludwig Amadé Karpf in my hands, quivering with excitement, there has been no higher goal for me than to seek out this tribe to document them in word and image. The fact that Karpf’s work is, quite inexplicably, hardly known will be to my advantage someday, God willing.
The wise Karpf wrote that, according to plausible reports by a tribe he had converted to Christianity, several dozen miles southeast of the mountains lives a people so extraordinary and unique that the history of this grim, animalist continent so hostile to life could be rewritten. A ray of light piercing the gloom—for their physique is said to be just as magnificent, vigorous, and well-proportioned as that of their black brothers, but light-skinned. They are said to wear gowns, even made of silk, to have command of the written word, and, according to what is admittedly a less-credible-seeming source, they even observe the Christian Sabbath.

15 April
I have more than enough time to wander around the camp, and the town’s distilleries and taverns, in order to swap stories with other expedition leaders and travellers. So many of them have been here much longer than me, but, it seems to me, often without any obvious reason; many have their women and families here, who anxiously persevere and pray while waiting for their men to return.
The fever is omnipresent. New damp mounds arise in the cemetery behind the wooden church every single day, often just small ones.

25 April
With each new day I am yearning for Paisley’s return more and more. The bungling attempts of my predecessors to cross the mountain range, and thus to possibly even locate the legendary tribe of light-skinned Africans, were perhaps not crowned with success even just due to their lack of knowledge of the conditions and what can generally be considered to be inadequate equipment and weaponry.
The fact that the trigger-happy general and trophy hunter Battsworth and his dissolute troops were the first white people to encounter a previously unknown tribe in the Mbambéré region—having, out of pure amusement, defiled the women of these people and burned down their dwellings—will surely not make it any easier to pass through the area. The following night, all of the men, including General Battsworth himself, except two heavily wounded escapees who lived to tell the tale were massacred in their sleep in the most abominable way.

4 May
The information I’ve gathered from the other explorers and pioneers confirms my suspicion that the travel reports so eagerly cultivated in the beloved homeland are often merely sensational phantasms arising within feverish, drunken minds. They deviously help to obtain money and provisions sent by the Africa Society, but also to bolste reputation and fame at home, even if often posthumously. The bitter medicine against fever—vast amounts of cinchona bark—is apparently meant to justify the gallons of poorly distilled alcohol that these gentlemen imbibe on a daily basis, as do I, more often than I would like.

16 May
A fortunate coincidence put an end to the indefinite, nerve-racking wait: along with Andersson, Raleigh, and one or two others, I received a missive this morning, in which the Africa Society announced that they would be willing to generously fund an expedition, moving upstream to determine what happened to Paisley and his men. I replied even before commencing my morning toilette and, since receiving the letter, have not granted myself even a moment of rest.
I am aiming to depart tomorrow at dawn, and fate seems to be on my side. All preparations are running as planned, which is surely owed to the endlessly long waiting period, during which countless details played out in my mind and various arrangements could be made in advance. It is vital to not lose any more time; the rainy season is about to begin, so in just a few weeks each stretch of path will become significantly more difficult to traverse.