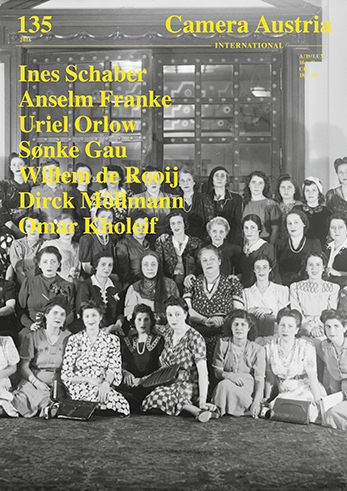 “History is equally a question of knowledge and narration, and very much a question of the position from which it is told,” writes Anselm Franke in his essay on the works of Ines Schaber. He also writes that “a society receives its characteristic imprint at the margins.” With these words, Franke not only approaches the political core of Schaber’s works; he also sums up the key interest of the present issue: the image’s oscillation between the visual and non-visual, between seeing and knowing, a resonance between words and images that harbour an unnamed location from which they show things and from which they show themselves in order for something else to simultaneously disappear. And it’s not only images that are missing; something is also missing in the images. This absence, however, is not simply invisible; rather, it marks the basic ambivalence and controversy of the images: as appearance, as classification, as narrative, as history, as politics. It is the location of the images’ unrest and of their role in the generation of meaning.
“For Ines Schaber, the photographic image exists between knowing and seeing, in a liminal realm of hauntedness, shadowy contours, and political figurations, cast as a field that is shaped by political histories of division.” Her works often involve single or multiple historical photographs, messages sent through time in the form of letters and commentaries as well as her own photographs of landscapes that revolve around the places and stories of the found pictures. She reactivates the meaning of places and events that are fragmentary and often concealed as a “revolt against the given” and the seemingly secure.
In his essay on Uriel Orlow, Sønke Gau also operates on the assumption that history is not simply a given and can’t be seen as an objective, homogenous, linear order. Methods of microhistory are one of the artist’s key points of reference in his works and are based on extensive research into histories. Accordingly, the points of departure for his research are specific locations that can be described as secondary settings. Places connected to events not accounted for in or omitted from the hegemonic historical account – its “blind spots” that are no less important, but represent intersections of various narratives. Once again: a society receives its characteristic imprint at the margins.
Dirck Möllmann wrote four letters to Willem de Rooij, in which he inquires into and expands upon one of the artist’s works or series in a downright intimate way. “An artwork, like letters, lives from the gaps in reality, from stumbling in the machinery of meaning, that it problematises … You disseminate representations in a new way and thus turn them into images. They critically examine the seeing and making of pictures. Their context extends over into the political, the distribution becomes meaningful, critical, reflexive as always. Yet you work against the pressure to reference. This power throws meaning into limbo, both here and there.”
Provisional and speculative strains carry through all three contributions, although it would be a fundamental misunderstanding to confuse this with imprecision or randomness. On the contrary: “Reckoning with the forces of ambiguity never exculpates one from historical precision while understanding the image as a limit-condition.” (Franke)
In an expanded Forum, we present ten young positions that illustrate the various tendencies in contemporary photography: formal experiments, approaches involving installation and performance, working with or establishing image archives. And in these, histories often play a significant role as well.