A collaboration between Oliver Ressler and Camera Austria

Due to the limited number of seats we recommend your registration:

Publication
On occasion of the conference, the reader Oliver Ressler (Ed.): Barricading the Ice Sheets. Artists and Climate Action in the Age of Irreversible Decision is published by Edition Camera Austria. 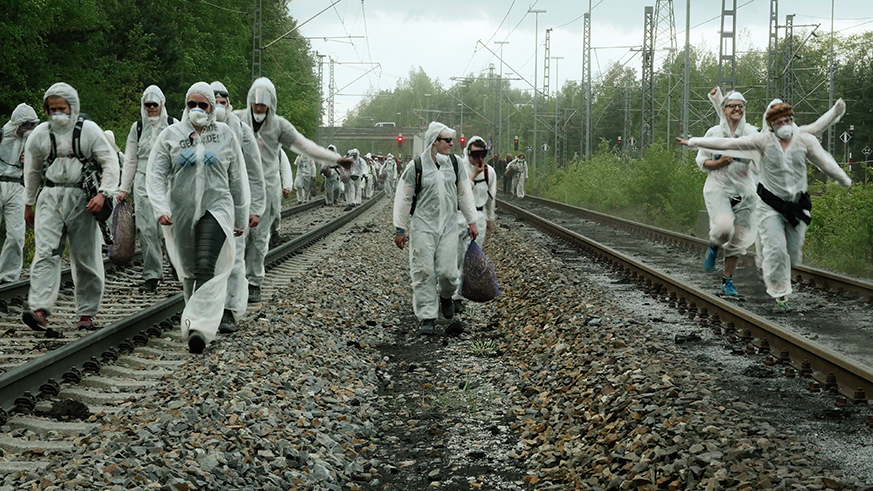 Today, the climate movement is stronger than ever. Polite protest is a thing of the distant past. Activists all over the world use mass civil disobedience tactics to disrupt climate-wrecking activities. This conference brings together a group of internationally respected climate movement protagonists working between art and activism. The artist-activists will discuss the movements’ methods, purposes, its past and future, speaking from the perspective of the fields in which they are personally most active. They will describe the strategies that have succeeded in breaking through the sophisticated strategies used by corporations to make pollution, emissions, and responsibility invisible. In bringing together artists involved in activist practices, the program deliberately calls into question the widespread habit of treating “art” and “activism” as distinct categories, professions or “silos,” when in practice the “affinity” between the two is such that they often overlap and sometimes cannot meaningfully be separated at all.

Oliver Ressler: Introduction
Oliver Ressler is an artist and filmmaker, and initiator of “Barricading the Ice Sheets”.

Aka Niviâna »Is Climate Awareness for Everyone?«
Aka Niviâna is a Nuuk-based writer and multidisciplinary artist who uses her work for putting focus on climate change issues in the Arctic and around the world.

John Jordan »Beautiful Trouble: A Handful of Principles for Creative Resistance«
John Jordan is an artist and activist, co-founder of Reclaim the Streets and The Laboratory of Insurrectionary Imagination, now based on the ZAD of Notre-Dame-des-Landes.

Nnimmo Bassey »Ecocide or Life«
Nnimmo Bassey, based in Benin City, Nigeria, is a poet and the director of the ecological think-tank, Health of Mother Earth Foundation (HOMEF) and member steering committee of Oilwatch International. He was chair of Friends of the Earth International (2008-2012) and Executive Director of Nigeria’s Environmental Rights Action (1993-2013). He was a co-recipient of the 2010 Right Livelihood Award also known as the “Alternative Noble Prize”. In 2012 he received the Rafto Human Rights Award. In 2014 he received Nigeria’s national honour as Member of the Federal Republic (MFR) in recognition of his environmental activism.

Round Table with all speakers

Nnimmo Bassey and John Jordan will be present also at this year’s edition of Elevate festival.

In parallel with the conference, the exhibition “Barricading the Ice Sheets”, featuring films on the climate movement selected by the speakers of the conference, will be shown at Akademie Graz.

Laboratory of Insurrectionary Imagination, Notre Flammes Des Landes: The Illegal Lighthouse Against an Airport and Its World, 16 min, France, 2018
Selected by John Jordan

“Barricading the Ice Sheets” is a research endeavor by Oliver Ressler and supported by the Austrian Science Fund (FWF: AR 526). In autumn 2021 it will materialize as an exhibition at Camera Austria.