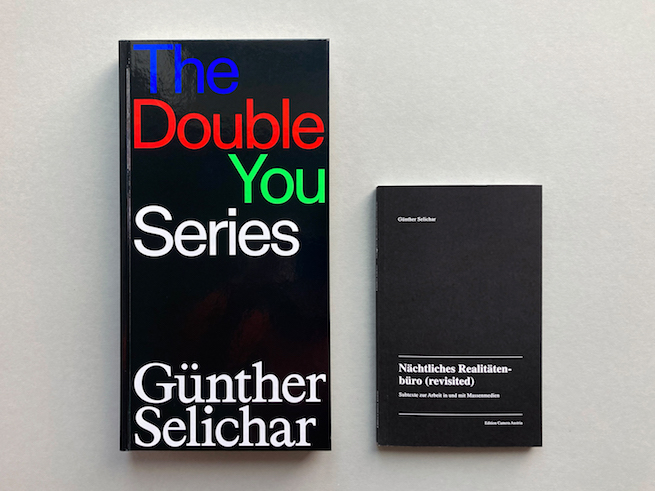 Two evenings in Vienna and Graz are dedicated to the presentation of the two new publications of Günther Selichar: Nächtliches Realitätenbüro (revisited). Subtexte zur Arbeit in und mit Massenmedien / Nocturnal Office for Real(i)ties (revisited). Subtexts on Working in and with Mass Media, published on the occasion of his exhibition SUB | TEXTE (Camera Austria, 10.12.2022 – 19.2.2023), and the artist’s book The Double You Series, which is published in the frame of his parallel exhibition Dominion of the Screens (Museum der Moderne Salzburg, 26.11.2022 – 12.3.2023).

The Nocturnal Office for Real(i)ties by Günther Selichar creates a space in which questions can be posed concerning the origins of photographic images and what lies “behind” them: the production processes, technology, distribution channels, and “SUB |TEXTE” that have decisively influenced and determined the conditions under which they were made. Created between 1981 and 1983, the Nocturnal Office for Real(i)ties takes the reader back to the starting point, as it were, of the critical processing of apparatus-based images and offers a means to identify the discontinuities in discourse and the differences between then and now, while at the same time marking a continuity of criticism and the political.

The Double You Series is based on the eponymous body of works that Günther Selichar created in 2020–2022. Instead of text, the artist’s book contains pictures of words: color images of four different screens with varying pixel shaped and scans from a variety of printed publications featuring diverse fonts. They spell the questions “Who?”, “What?”, “Where?”, “When?” and “Why?”, which guide journalist’s investigations and structure their output. With his text images, the media artist and theorist draws a line from early printed mass-media reproductions to texts on screens. The book prompts us to reflect on facts, which have lately often been supplanted by narratives.