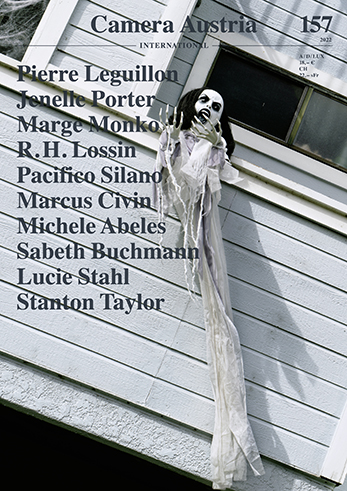 The artists featured in this issue are interested in exploring the heterogeneous ways in which the visual worlds of artistic works, advertising and media images, strategies of product display, and the ephemera and spatial manifestations of (late) capitalism shape our everyday lives. These artists examine the related issue of which stories/histories, desires and chasms, and what kinds of alienation and repression, might lie behind these images.

The artists featured in this issue are interested in exploring the heterogeneous ways in which the visual worlds of artistic works, advertising and media images, strategies of product display, and the ephemera and spatial manifestations of (late) capitalism shape our everyday lives. These artists examine the related issue of which stories/histories, desires and chasms, and what kinds of alienation and repression, might lie behind these images.

In just 13 photographs and 1,500 words, Jenelle Porter examines the meta-referential practice of the “picture collector” Pierre Leguillon and localizes his work in a web of art-historical references that transcend media and time. Citing selected examples, including Leguillon’s meticulously compiled slideshows which cover a wide variety of art-historical topics, along with film projections, and also the art-historical and mediatic use of icons of photography, the author illustrates how the artist succeeds again and again at foregrounding “the artwork’s paratext, that is, the apparatus that supports the art exhibition: the invitations, the crates, the educational programming, et cetera.”

Marge Monko also navigates a field of manifold references, focusing on the correlations between modernist progress and the social role of women in particular. R. H. Lossin reflects on the artist’s work against the backdrop of Sigmund Freud’s study Civilization and Its Discontents, exploring how the malaise and discontent of (late-)capitalist society are mirrored in Monko’s photographs. °“Monko’s work, taken as a whole, insists above all on the dialectical life of images; and a key part of this argument about the social life of images, their roles in constructing reality, and the reality or ‘reality’ that they, in turn, depict is the centrality of female bodies in her work.

”I’m drawn to images that seduce me but also repulse me. I want to seduce you on the surface, and I want you to feel uneasy once you sit with the image. . . . I’m interested in having complex conversations around toxic masculinity and fetishization of power . . .” This is how Pacifico Silano describes his in-depth exploration of image material from late 1970s and early 1980s gay magazines. Marcus Civin elaborates in his contribution on how imponderables but also critical potential emerge from under the surfaces of the desire-generating media imagery compiled by Silano.

The work of Michele Abeles is likewise guided by a differentiated view of media-conveyed images. Sabeth Buchmann describes the artist in her “role of a contemporary portraitist” who is very much aware of the visual codes and strategies of self-presentation, but also the presentation of commodities, through photography—referring to “her view of the genres, styles, and looks people use to stage themselves and their surroundings, through which they in turn are coded and interpreted.” In her text, Buchmann makes it clear that, in Abeles’s work, “an image never stands alone, but (re)pro­duces itself within the framework of integrated media systems,” thus communicating interreferentially.

Stanton Taylor situates Lucie Stahl’s photographs, sculptures, and installations against the background of the “petroleum complex” described by Bertolt Brecht around 1930. Yet Stahl is not interested in documenting the logistical and economic processes behind the extraction of oil, nor in sharing a particular narrative. “In trying to approach a topic almost too big for words, she prefers to zoom in on the details in lieu of attempting an impossible overview.” Her oftentimes abstract, surreal works make clear that behind capitalism’s promise of expansion and consumption there is something inscrutable and also threatening lurking.

Copyright © 2022
No parts of this magazine may be reproduced without publisher’s permission.
Camera Austria International does not assume any responsibility for submitted texts and original materials.