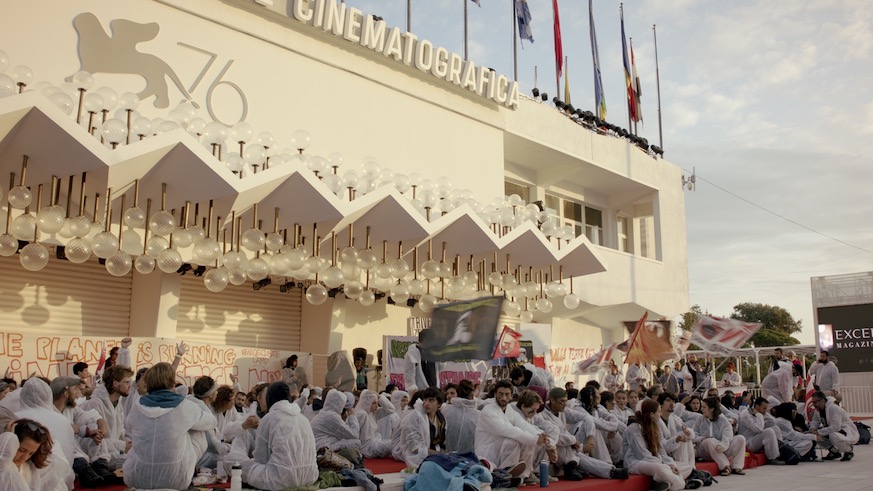 Barricading the Ice Sheets by Oliver Ressler examines the climate crisis and the climate justice movement, exploring their interplay with art. The research project records exemplary states of mobilization, activities, gatherings, and working sessions from these climate movements. Horizontally organized climate movements have sprung up all over the world, while polite protests are a thing of the past, with solutions now being sought through collective action. Camera Austria in Graz already hosted a conference on this topic in February 2020, and a publication of the same name was released. The exhibition in September 2021 presents the artistic work resulting from Oliver Ressler’s research extending over two years. This includes material that can be seen as specifically “documentary,” but also other elements where “artistic” activity is more obvious. Yet ongoing reflection on the work illustrates how any contrived boundaries between “document” and “artwork” become systematically blurred.

Oliver Ressler: An Archivist of Capitalocene

Oliver Ressler’s oeuvre is an impressive filmic archive of social movements. The exhibition Barricading the Ice Sheets adds a new chapter to this body of work which chooses to focus on climate justice movements in Europe and beyond—as already evident in the six-film cycle Everything’s Coming Together while Everything’s Falling Apart (2016–20) and in even earlier examples like Leave It in the Ground (2013) or the slide installation For a Completely Different Climate (2008).

One of the key aspects of Ressler’s production is its archival character, immediately perceivable when looking at his entire film production on social struggles, but also when visiting his solo exhibitions, often designed as multichannel projections, presenting several films at once. The radical nature of archival practices is often discussed in contemporary art, but it rarely gets as clear as in Ressler’s work (and the project discussed here makes no exception), which functions as a repository of discourses, practices, and stories legitimizing subaltern subjectivities, truths, and struggles, visualizing the global dimension of social movements beyond political and geographic fragmentation.

Addressing the topic of climate justice movements, Barricading the Ice Sheets could thus be seen as one part of a hypothetical Capitalocene section of this archive—or, more precisely, of this counter-archive, as “Capitalocene” itself is a counter-term coined by Jason W. Moore in his 2016 book Anthropocene or Capitalocene?. It is meant to question the definition of the Anthropocene with its implicit assumption that all humans are equally responsible for global climate disruption. Yet the formula made popular by Moore clarifies how, historically, the main cause of the present climate crisis has to be identified in the process of capitalist accumulation. Political ecology implements a renewal of historical materialism. Capitalism is not described as a system that produces its own ecological regime, but as an ecological regime in itself, in which accumulation is built upon the appropriation of the labor of factory workers and, also and of equal importance, that of women, enslaved, racialized individuals, and nonhuman nature.

Ressler’s Not Sinking, Swarming (2021) is a film centered around an assembly which happened in Madrid in 2019, where a group of delegates from different Spanish groups discusses the organization of an action of civil disobedience on the occasion of an international week of rebellion for climate justice. A recurrent trait of Ressler’s work is his choice and ability to document practices of self-organization. He has filmed assemblies on a number of occasions, for example together with Dario Azzellini in the first decade of the twenty-first century in Venezuela during the Bolivarian Revolution, and in different worker-controlled factories in Italy, France, and Greece. In Take the Square (2012), Ressler invited activists from Occupy Wall Street, the Spanish Moviémento 15M, and the Syntagma Square Movement in Athens to reenact the methodology of working groups that became central during the 2011 “Occupy wave,” and to reflect on the role of self-organization.

This predilection for assemblies is important from different points of view. First of all, because the temporality of Not Sinking, Swarming, and of Ressler’s films in general, is tuned to the long temporality of self-organization. The “choreography” of social movements as portrayed by the Austrian artist exceeds the moment where direct action manifests in the street (without excluding it), comprising instead the apparent stillness of assemblies with their slow work of debating and collective decision-making: the non-cinematic time of organization. Ressler films “in the wings,” going beyond the superficial representation of the performative character of climate justice groups as a generic theatrical attitude. On the contrary, Not Sinking, Swarming includes the temporality of prefiguration in the social movements’ performance, the preference toward immediate, non­hierarchical forms of organization over the transformation of society after a hypothetical seizure of power to come. Of course, Ressler is well aware that the assembly of a Venezuelan consejo communal (communal council) in 2009 is different from a gathering of climate activists in Madrid in 2019, and that any homologation would be simplistic. These manifestations happen at different times and in different contexts, and they are probably inscribed within very different political genealogies. Still, it is the participatory moment and the temporalities of self-organization that are highlighted by the artist.

Those parts of the film documenting the Spanish assembly appear as fully pixelated sequences. The viewer can clearly follow the dialogue and the development of the discussion, but can only guess at what hides behind the grid of pixels. The practical reason behind this choice is the necessity to respect the anonymity of the participants in order to prevent legal consequences and to avoid portraying them as leaders or prominent individuals. Beyond this practical urgency, this example of Abstract Realism reminds me of the link between financial abstraction and extraction (or extractivism). It is a link that becomes clear when considering that both of them work by extracting value from preexisting richness, without any direct involvement of capital. In their book Assembly (2017), Antonio Negri and Michael Hardt reflect on the role of finance not only as a global infrastructure intertwined with the extraction of natural resources, but also as the instrument through which capital is able to extract profit from cooperation and social productivity. Data mining is, for example, a term directly connecting the extraction of value from (socially produced) data to that of minerals or oil from the underground. As pixels are nothing but aggregations of electronic information visualized as small squares—the digital matter of the almost totality of images circulating today—the abstract visual appearance of Ressler’s film carries with it a reminder of the challenge posed to social movements by the capitalist couple abstraction–extraction.

Barricade Cultures of the Future (2021), another film presented in Barricading the Ice Sheets, is structured as a dialogical interrogation on the status of art today, on the relation between aesthetics and politics.
Nnimmo Bassey, Jay Jordan, Steve Lyons, Marta Moreno Muñoz, and Aka Niviâna are all artists and climate activists. They participate in a filmic round table held in the scope of the conference Barricading the Ice Sheets conceived by Ressler and held at Camera Austria in February 2020, discussing their role within social movements in general, and within climate justice movements in particular. They debate the importance of deconstructing the artificial separation between artists (as those with the monopoly of creativity) and activists (as those with the monopoly of social change), the urge to learn from indigenous movements that the “common” is more important than the “new” (rediscovering the radical potential of ancient traditions in the present), the necessity to refuse biased positions when it comes to discussing nonviolent or violent tactics of resistance, and the capacity to work outside institutions (going beyond the narrow political horizon of the neoliberal art organization), while at the same time being able to bring struggles for radical democracy into the institutional space.

The film alternates images of the five speakers with excerpts from direct actions organized by climate justice movements. One sequence shows a group of demonstrators in Paris throwing around huge inflatable silver blocks during the COP21 protests in December 2015 (drastically downsized after the state of exception was proclaimed in response to the attack on the Bataclan nightclub just several weeks earlier). These large, light, reflecting objects form the “Red Line Barricade” (Fabriqué à Paris – Made in Paris, 2015), created by the Tools for Action collective and designed to provide demonstrators with an effective and playful barricade. As noted by the choreographer and theorist Moritz Frischkorn, these inflatables remind of Andy Warhol’s Silver Clouds (1968): reflecting, helium-filled pillows created by the artist as the stage setting for Merce Cunningham’s dance piece RainForest (1968). The work by Warhol is also mentioned by José Esteban Muñoz as one good example of queer utopian aesthetics. Recalling Herbert Marcuse’s interpretation of the myth of Narcissus, Muñoz underlines how Silver Clouds questions the performance principle underpinning capitalist society, suggesting a different relationship between human and nonhuman nature: “We can thus consider Warhol’s silver pillows, which are also trees in Cunningham’s RainForest, as components in a narcissistic scene: to gaze into [a] pillow’s reflective surface is to participate in the modality of contemplation that is an interruption in the mandates to labor, toil, and sacrifice that the performance principle describes” (Muñoz, 2009). In addition, the becoming flower of Narcissus after his death shows a process of absolute communing with nature, which subverts the subject-object relationship between human and nonhuman nature, one of the philosophical and epistemic cornerstones of anthropocentrism and modern extractivism.

Almost fifty years after 1968, the images shot in Paris by Ressler during the COP21 protests, where demonstrators were throwing around giant inflatable silver blocks, document a social choreography in which the great refusal has been updated to the refusal of extractivism, and where the horizon of a different relationship with nonhuman nature, now based on a radical critique of Western anthropocentrism, loses any naiveté.
The exhibition is completed by a series of photographic works in which messages about the effects of the capitalistic mode of production and lifestyle on the biosphere are superimposed onto images of the arctic ice, permafrost, coal mines, skies, and oil spills. Coherent with Ressler’s militant understanding of art, these prints seem designed more to be waved during a demonstration than to be hung in someone’s living room. It is not to be ruled out that they will soon become new signs, or maybe inspire new collective gestures and practices that will enrich the archive of the Capitalocene.

Oliver Ressler (born 1970, lives and works in Vienna, AT) produces installations, projects in public space, and films on economics, democracy, racism, climate breakdown, forms of resistance, and social alternatives. He has completed thirty-six films that have been screened in thousands of events of social movements, art institutions, and film festivals. Ressler has had comprehensive solo exhibitions at CAAC, Seville (ES) and SALT Galata, Istanbul (TR), and participated in the biennials in Taipei (TW, 2008), Lyon (FR, 2009), Gyumri (AR, 2012), Venice (IT, 2013), Quebec (CA, 2014), Jeju (KR, 2017), and in documenta 14, Kassel (DE, 2017).
www.ressler.at