Within the frame of:
Art is conrete. And so is truth? 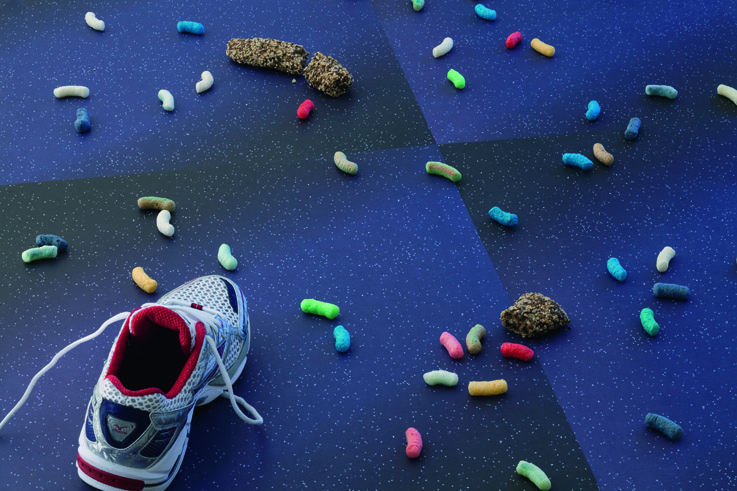 In the film “American Beauty” (Sam Mendes, 1999) there is a famous sequence where a plastic bag is seen blowing in the wind and dancing among the leaves in a video of one of the film’s protagonists. As a curious and much-discussed parenthetical view of reality within the fiction of the filmic world, that is, as a shift into a completely different visual register, this scene signifies a fracturing of visual discourse and has thus become a kind of signifier for “the documentary” and its increasingly parasitic permeation of current image politics.
Now, in two series by Stefan Panhans, “Items for Possible Video Sets” and “Untitled” (both since 2009), this fracture may potentially be discovered: exposed concrete, sand, plastic waste, and a charred baguette meet haute couture, possible memorabilia, athletic helmets, brightly coloured bric-a-brac, candles and artificial eyelashes, an odd clash of textures, materials, patterns, objects, and aesthetics that really cannot be adequately described by the word surreal. Involved here is not the absolutely most improbable encounter between disparate phenomena (at least not in terms of being ascribed to different aesthetic regimes); the artificiality of the arrangements (for the “Items” are orchestrated down to the last detail) is subverted by a peculiar implicitness, which is why the term “staging” is actually rather inappropriate. Instead we are dealing with an act of focusing on the flowing transitions, on the implicit inconsistencies that presently pervade the “parliament of things”, with a meted-out foiling of visual certainties: always both superficial and real at the same time, fictitious and documentary, staged and naturally evolved, transient, precarious, and yet still unshakable—perhaps it is such a moment that lends the works their presence and suspense. And just maybe we are facing a duplication of social fluidity that has come to be taken for granted, of that contradictory (artificial yet simultaneously real) homogenisation of formerly opposite or mutually exclusive social spaces and practices that install themselves, in their artificiality, as new political regularities.
So can the dancing plastic bag even be upheld as a metaphor for the fracturing of reality through a regime of the fictional? Or, when it comes to the dancing bag, have the various pictorial regimes not been long confused, having started to dance in union with the social and political regimes? Is it this dance that we encounter in the pictures of Stefan Panhans?