The award will be presented by Lisa Rücker, City Councillor for Cultural Affairs. 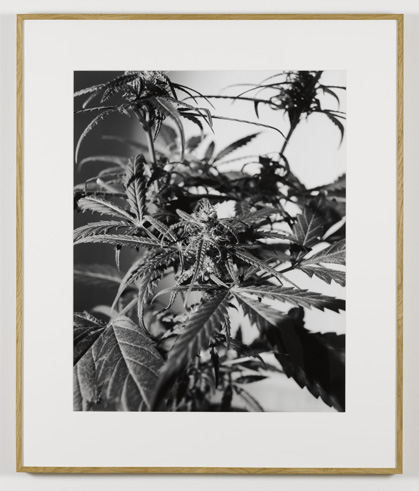 “But in all my works there is a tension between the apparent narrative, which the viewer immediately sees, and what remains invisible or illegible”, noted Joachim Koester in a conversation with Anders Kreuger from the year 2005. His interest lies in the world surrounding the pictures. As an example, the series “The Secret Garden of Sleep”, which is comprised of black-and-white photographs of cannabis plants, a text, and spreads from the magazine High Times, revolves around a kind of invisible index of things. After Ronald Reagan was elected president of the United States, he revoked the liberal drug legislation enacted by his predecessor Jimmy Carter, thus making it possible for someone to be sentenced to life in jail for growing cannabis. In the conservative 1980s, cannabis was to become a symbol of the social upheaval experienced during the 1960s, which Reagan, as governor of California, had already tried to halt through excessive police operations. Since it became next to impossible to grow cannabis in open air, amateur botanists started experimenting with ways of optimising its growth indoors. In other words, Reagan’s restrictive policies led to a genetic revolution of the cannabis plant sparked by amateurs and based on the significance of the plant for America’s countercultural pop culture since the 1960s.
As Joachim Koester mentioned in an interview for the exhibition “A Blind Spot” curated by Catherine David in 2012, it is this type of invisible index of “how things are connected in ways that are not quite apparent”, that fascinates Koester—the actuality that photography can generate meaning in a specific context only. Rosalind E. Krauss has said that “a meaninglessness surrounds it which can only be filled in by the addition of a text”.
Joachim Koester is thus engaged in a field of critical treatment of the documentary, as it is linked to the history of modernism, for “The Secret Garden of Sleep” makes reference to the obsession with modernism by citing real life. While modernist photos of plants predominately served purposes of description and classification or were created to assert the intrinsic beauty of nature, the pictures of cannabis plants taken by Joachim Koester revolve around neither aesthetics nor classification. Instead, they are dedicated to the (political) discourse that is inscribed into these plants, as it were.

Joachim Koester already participated in a two-part exhibition project at Camera Austria in 2006 and 2009: “First the artist defines meaning” and “Then the work takes place”. These two exhibitions explored this relationship between concept and visibility, between knowledge, history, and image. In the exhibition “Then the work takes place”, Koester showed the series “The Morning of the Magician” from the year 2005, which references a commune founded in 1920 by Aleister Crowley in Cefalù on the island of Sicily. “Closed in 1923 by order of Mussolini, ‘The Abbey of Thelema’ was abandoned for more than 30 years, only to be rediscovered by the filmmaker Kenneth Anger who, supported by the sexologist Alfred Kinsey, exposed the original murals evocative of the tantric practices, sexual rites, and drug use of the Crowley group.“ (Hal Foster) Crowley’s system was a technology of the self, but from the fringes of official culture. His legacy is that of the “great transgressor“. He transgressed victorian morals in a sort of tour de force of debauchery. That side of his practice constitutes a direct link to parts of the later counter culture.
Today, only ruins of the original buildings are left—a metaphor for the failed utopia. With only bits of masonry, overgrown pathways, and a view of the town of Cefalù visible, Koester’s documentation is teeming with gaps, insinuated contexts, and absent knowledge.
In this sense, Joachim Koester brings the photographic image to the brink of documentation in this series, but then also to a domain where shifts play out among perception, history, knowledge, politics, and image. Along the way, the artist intervenes—with unspectacular yet precise pictures and arrangements of photo series—in the well-ordered distribution of our sensory experience and their identification of the visible based on what can be seen. Yet since Joachim Koester is primarily concerned with what is not seen (or cannot be seen, or is not allowed to be seen), he unhinges this sensory experience and the fabric of the documentary images. As a result, the reconfiguration of image, knowledge, experience, history, and meaning becomes essential.

Joachim Koester participated in two exhibition projects at Camera Austria:“First the artist defines meaning”, 2006, and “Then the work takes place”, 2009. His work was published in Camera Austria International 66/1999.