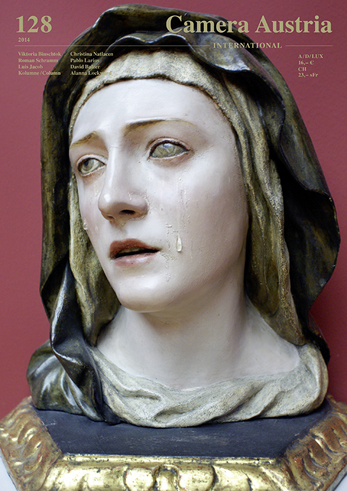 Playing through pictorial metaphors and aesthetic and semantic conventions, linking images in an associative-algorithmic manner based on structural characteristics, “poking” into apparent gaps, empty spaces and vulnerabilities in visual narratives—photographic strategies not connected by any clear or comprehensive context—are the main focus of interest in this issue of Camera Austria International.

Viktoria Binschtok initially develops her series using search engines, which compile images according to criteria such as colour components and how they are distributed in the image, contour lines, and the structure of surfaces. In a subsequent process, these images serve as templates for a restaging through which displacements and differences ensue. In her essay, Christina Natlacen compares this conceptual arranging of individual images with “Aby Warburg’s approach to preparing the boards for his ‘Mnemosyne Atlas’, which still today remains highly influential to artists”. Warburg was also searching for a type of formal analogy—the “pathos formula”, which was supposed to provide him with a hinge for linking images across cultures and over centuries.

Luis Jacob’s work “Show Your Wound” (2010–12) consists of a sequence of twenty-six snapshots taken by the artist in museums and galleries across the globe. David Balzer characterises them as an “alliance of contemporary minimalism with historical religious painting and sculpture”. The taken images “are not ironic deconstructions or critiques of museums, as Dadaist readymades were, but rather intent inquires into them, and into the nature of looking”. The museum’s systems of order mainly address visitors solely as viewers: Do not touch. The art-historical works that roll past us disembody the image and visually render the bodies—a mechanism with inherently far-reaching consequences for current pictorial cultures.

Roman Schramm’s photographs, as Pablo Larios writes, progress “through loosely thematic series that operate as formal experiments with formal conceits …”. Around his photogenic objects, with the help of a 3D program, he creates one or also multiple spaces that extend beyond the edge of the picture and into the exhibition space. According to the author, these meanwhile absurd, comic constructions refer back to “visual and meaning conventions … the kind of cultural-industrial techniques that are wholly on display in our own era”. Schramm appropriates these conventions to simultaneously modify them and shift them onto themselves.

What interests us in the works of the artists presented are the forms of researching and reordering specific to each of them, forms which, in these cases, do not process history or stories, events, historical archives etc., but instead other, already existing, everyday cultural or institutional forms for the on-going arranging of images. W. J. T. Mitchell termed such images that make reference to other images meta-pictures: pictures about pictures, in which a particular  “pictorial self-reference” is inscribed. They produce theory through establishing representations, as Mitchell described in an interview with Georg Schöllhammer in 1998.

This issue once again focuses above all on one idea, one that for us constitutes a fundamental guideline for understanding photographic practices: the fact that image production also represents a form of developing a theory about images. Our hope is to take you on a journey with this as well as other issues of our magazine and with our passion, that is not only one for seeing, but also for thinking.