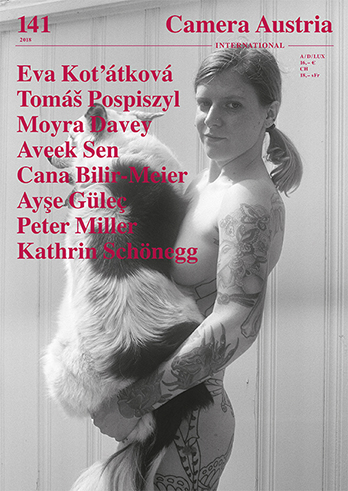 Throughout all of last year, we’ve devoted much thought to the archive as a compendium of documents, a space for analyzing history, an institution, and a form of cultural memory—in its aesthetics as well as its politics, as a material practice and as an idea. We’ve done this with an intensity that quite possibly still resonates and that influences, if not outright shapes, our inquiries into contemporary photographic practices, without this consideration having explicitly determined the contributions of the current issue.
Eva Kot’átková’s interest in educational systems and in education’s regulating function, which she juxtaposes with bodily functions, situates the (mostly childlike) individual on a borderline between naturalness and socially induced transformation, hence in a realm of knowledge and of the body as archives. As Tomáš Pospiszyl illustrates, her installations, collages, and films carry these ideas into performative modes of translation and transposition, that both demonstrate and subvert the strategies of imposing discipline.
For Aveek Sen, an investigation into Moyra Davey’s films “Hemlock Forest” (2016) and “Wedding Loop” (2017) leads him to a list “of the quotations, references, and allusions that make up the layered texture of Davey’s films.” It’s not only the artist’s films that branch off into a kind of displaced archive, however; her “Hoardings,” which she has been enacting for a long time under a variety of titles, comprise a kind of private archive, a fluid archive in motion.
Cana Bilir-Meier’s works also address forms of the archive and carry the idea further to include questions on memory and critical representation, for instance when material from her family’s archive is combined with stories that have been orally passed on. In conjunction with found photo and film footage, Bilir-Meier’s works, based on “migrant-situated knowledge,” unfurl to tell tales taken out of the private context to demand attention for the suppressed and silenced parts of memory, as elucidated in a conversation between the artist and Ayşe Güleç.
Peter Miller scours the history of the medium of photography and of the proto-photographic and proto-cinematographic methods. In his practice, photography itself functions as an archive of possibilities to allow images to emerge or to conjure them from photography’s memory. For Kathrin Schönegg, the historic and discursive field around cinema’s earliest days, together with its illusions and optical tricks, its culture of the spectacle, provide the “box of tricks that Peter Miller draws from: his works explore the magic of the everyday and probe the world to find what is relevant in terms of film and photography.”
The respective politics relating to each of these fields of practice seem evident; they combine various forms of the archive with numerous ideas about the private and public spheres, the body, and history, as well as with varying forms of performance, montage, appropriation, rewriting, and renewed performance, which is why their lines of inquiry lead far beyond the archive.
We are very pleased that Christina Töpfer takes over as the magazine’s editor-in-chief with this issue. Töpfer has been an editor and author for Camera Austria International since 2013, and has long been involved with the thematic focus, form of inquiry, and cross-section of artistic positions that we’ve addressed since that time. The magazine will carry her signature in an even more pronounced way in the future, and will form an essential contribution to the recurring necessity of staking out a position in the vast field of contemporary photographic practice.