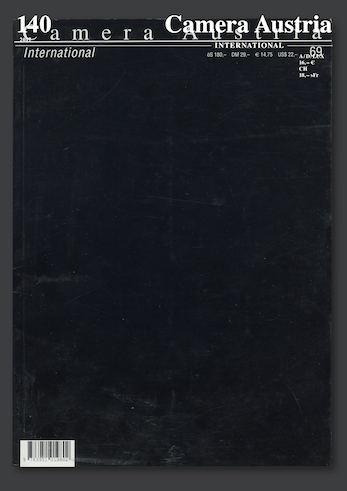 “There are people who want the past to be repeated, so they ensure that we cannot remember it,” as Priya Basil notes in Lettre International No. 118, citing Paul Krugman. I can hardly imagine a more apt description of the consolidation of reactionary political powers, now playing out in Austria as well, on the heels of the most recent national parliamentary elections. Such politics are increasingly moving towards a sealed-off, ethnically pure dream present that reflects the past, with its force rooted in the repression of memory of the region called Europe—constantly in flux, immersed in change, social blending, dissolution, and reinvention. The prosperity-driven fear of loss, the angst about an Other who, though essentially unknown, is considered to threaten an identity that never existed. How should we react to fake politics that only governs through regulatory tightening under the guise of media campaigns, Twitter, and selfies? Should we—an admittedly hegemonic term for an utterly diversified landscape of cultural producers—be constantly reminding ourselves that our agendas of recent decades have been trying to counter precisely this development? Which instituting and institutionalizing processes have we lifted off the ground in this respect, which are presently being brought to the limits of their viability by financial responsibitilies and political pressure yet again? And—perhaps only as a sideshow—what significance will the strong criticism of documenta 14 have for the framework conditions necessary to negotiate these questions in the future on the level of large-scale cultural events—or not? What latitude will we have in the coming years to prepare spaces in which questions related to the common good, community, to opportunities for critique, to the all-decisive notion that everything could be different, can even still be posed?

It doesn’t correspond to our self-conception of collaboration with artists to pass along, vicariously for the responsibility of Camera Austria as an institution, these questions to the artists, to avail oneself of the criticality of art production in order to, in one’s own favour, make a claim to a—dubious—state of resistance. It is for this reason that, for the first time in many years, we are not elaborating on or trying to convey, in this editorial, the special meaning or political relevance of the artistic positions introduced in this issue. We believe that the main thrust is evident through their respective contributions. Yet in which societal space will these contributions land today when, as Benjamin Buchloh established in his obituary for Allan Sekula published in Artforum, total depolitization appears to be the precondition of cultural recognition?

In recent years, we have touched on the relationship between art/photographic practices and politics again and again—all the while fearing that we were trying the patience of our readers. Not too long ago, for example, Tom Holert identified the political potential of art precisely in an “incongruence between art and politics”. “A decisive task of art lies in the tangency that elicits a modification of the way in which the possibilities for action, for intervening in certain regimes, might be imagined. Such an effect eludes commensurability. It points to moments of the political situated at the dawn of change, moments whose connection to art is never obvious and always questionable. Yet undeniable all the same.” (Camera Austria International No. 129 / 2015). But where are such beginnings evident, considering the indisputable acts of revisionism that have been in the process of dismantling the political, societal, social, feminist (et cetera) projects since 1968?

In the year 2000, the Graz-born artist Jörg Schlick designed for us the “Black Issue”, Camera Austria International No. 69, as a reaction to the coalition governing Austria comprised of the People’s Party (ÖVP) and the Freedom Party (FPÖ): a black cover, all in-between pages printed fully in black on the different kinds of paper typically used at that time. Aside from the imprint, the only text printed in the issue was “ÖSTERREICH 2000” on each right page. An insert was included featuring a letter by the publisher Manfred Willmann and the editor-in-chief Christine Frisinghelli, which, in the name of the editorial team, addressed the fragile autonomy of artistic expression and the contested position from which one may speak. The cover of the present issue, No. 140, literally looks back on this former cover, takes a closer look, and attempts to resurvey it and circulate it once again, while also establishing its topicality today. Published in the three subsequent issues of the same year (Nos. 70, 71, and 72) were reactions, statements, letters, and artistic contributions that responded both to the magazine and to the political situation at the time. For example, the team of the photographic department at the Stadtmuseum Münster wrote: “We support your consistent political stance. And we also hope in the future to have you express your clear political opinion about the political situation in Europe.” Have we met this challenge in the years since? A local FPÖ councilwoman remarked at the time: “Even if the colour black [an allusion to the colour of the party ÖVP] may have a certain allure for you, Mr City Councillor [Helmut Strobl, ÖVP], I would still beg to ask: Would you benefit from grant funds of the City of Graz being used to publish printed works like the most recent issue of Camera Austria?” Now, the City of Graz did not reduce their support back then, but in the last few years funding certainly has been curtailed.

Most recently, the Forum Stadtpark in Graz—the starting point for the Camera Austria endeavour—came to be wrongly associated with property damage in the city due to a related conference on civil disobedience: political pressure is increasingly being exerted on cultural institutions that challenge the status quo, the forgetting of history, in order to facilitate its return (as farce?). This might be dismissed as local incidents, but the shift in political rhetoric of the last seventeen years tells a different tale—from “fair labour policy”, °“social tourism”, “defining culture”, “mendacious press”, or “upper limit” and “foreign infiltration” to “do-gooder”, let alone the unspeakable and largely unsanctioned statements made in Germany by the party Alternative for Germany (AfD).

And that which was once cultural policy has not remained untouched by such developments. Therefore, in this foreword, we call upon you to give your full attention and assistance to art and cultural initiatives in your immediate vicinity. They are especially deserving of such support in view of the shifting political hold on their deviant, marginal, minority, abstruse, idiosyncratic, autonomist, and possibly even hardly conveyable themes, formats, and content—otherwise, they might well disappear altogether.