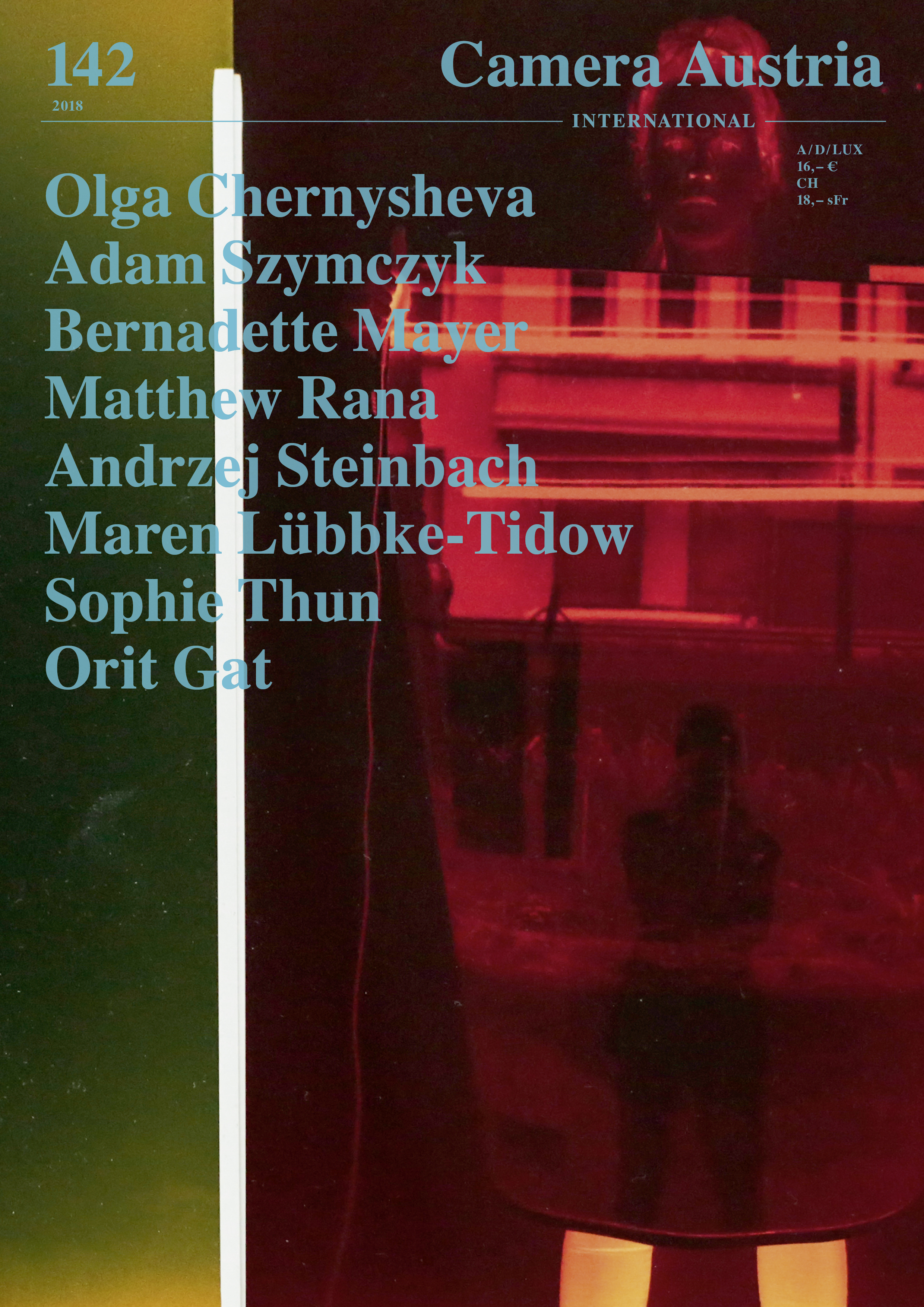 Pictures of people and situations believed to be typical of everyday life are what the artists featured in this issue of Camera Austria International have made the focus of their photographic work. They all share an interest in what Henri Lefebvre described, in his Critique of Everyday Life, as “lived experience”—in the conviction that this is anything other than banal or trivial.
The photographs, videos, drawings, and paintings of Olga Chernysheva deal with everyday life in post-communist Russia, which the artist views with equal measures of precision and empathy. As Adam Szymczyk writes, this view is free of “Ostalgia” and eludes the kind of orientalization so frequently experienced by East European artists. Instead, he sees Chernysheva’s artistic work in the tradition of the (ir)realistic authors of the 1920s and 1930s, who tried to capture the quotidian in the Russia of the post-revolutionary era in all its absurdity. “It is the quality of sheer presence, of being, that interests the artist,” notes Szymczyk. “People gazing, standing in line, loitering, walking, parading, dancing, guarding.”
A similarly calm yet meticulous view of everyday life is taken by the photographic narrative project “Memory,” developed by the American author Bernadette Mayer in 1971—her only visual work to date. For “Memory,” Mayer shot an entire roll of 35mm Kodachrome slide film on each day of July in the year 1971, while also recording her daily activities in a journal and on audiotape. Matthew Rana illustrates the affinities between “Memory” and the expanded cinema of the 1960s and 1970s, situating Mayer’s visual and literary surveys in the age of cybernetics and the related oscillation between order and chaos.
Taking the works “Figur I, Figur II” (2015), “Gesellschaft beginnt mit drei” (2017), and “Der Apparat” (2018) as examples, Maren Lübbke-Tidow traces the “spaces of dissonance” arising in the work of Andrzej Steinbach. His performative series of portraits, developed within a precisely planned dramaturgy, reveals how social practice and cultural ascriptions influence the image of the self. Yet the clear interpretability of these portraits is repeatedly disrupted, for “the figure slips away and keeps coming back,” as Lübbke-
Tidow quotes Anne Imhof. For the author, “it is an image of man or a deeply human image that Steinbach wants to show, without ignoring the outside—which in turn compels him to allow his figures to initially seem foreign and model-like.”
Another type of portrait is explored by Sophie Thun, who superimposes architectural spaces with photograms of self-portraits. By situating these superimpositions in an exhibition space, she often inscribes herself therein in almost illusory form. Orit Gat creates references to art-historical contexts and maps out how Sophie Thun’s photographs tie into a long tradition of female artists’ self-representation, going back to the mid-sixteenth century, but also how body and space become intertwined in the artist’s works. In Gat’s view, Thun’s photographs “start with the artist’s body and the relationship she delineates between it and the space.”
We are pleased that Adam Broomberg and Oliver Chanarin agreed to take over the Forum section of this issue. Together with students from their class at the Hochschule für bildende Künste in Hamburg, they have focused on those images that they “still care about” against the backdrop of the endless stream of pictures on the Internet. Inspired by the Surrealist method of “Cadavre exquis,” a captivating sequence of images and an introductory text were created that open up unexpected relationships between their individual parts.