»Uncovering History«  is the second part of the exhibition series »Disputed Landscape«, in cooperation with Kunsthaus Graz. 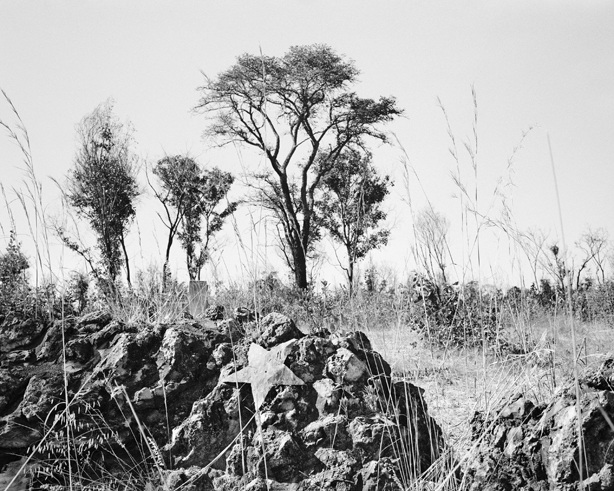 Since Alain Resnais’s Night and Fog (Nuit et brouillard, 1955) we have known that there is nothing to see, that catastrophe and crime do not always leave traces in the visible realm. Resnais drew on a wide variety of pictorial material—from different sites and various sources—for the history that his film seeks to reconstruct, rather than trusting in the gaze focused on what can be seen. In a remarkable way, but also quite oppressively, this film oscillates between authenticity and the impossibility of any vestige of authenticity. We are tempted to follow the lead of Claude Lanzmann in speaking of an utterly fundamental and ineluctable unrepresentability 1—but only when dealing with a kind of reclamation, with an act of making-visible-again, with an attempt to show something that did happen but is now gone. Yet how can this succeed? Are not all ‘images in spite of all’ 2 necessary in order to highlight those places that have become inscribed into collective memory, which is in turn also full of images? Do not the images, despite everything and although arriving too late, again inscribe this history into those pathological places (and landscapes) that have become the showplaces of the inconceivable? And do not these images surface precisely at the vanishing point of this inconceivability?

The second segment of the “Disputed Landscape” exhibition project, “Uncovering History”, examines such questions dealing with pictorial voids or gaps that the pictures fill or where they arise, especially those that history leaves behind—when merely banal traces of the events themselves remain.

In the series “As Terras do Fim do Mundo” (The Lands of the End of the World, 2010), Jo Ractliffe documents her journeys to the south of Angola seeking vestiges of the Angolan civil war, in the scope of which South Africa attacked from occupied Namibia in 1975 and also engaged in conflict with the Namibian liberation movement. She travelled with former soldiers who were revisiting, for the first time since achieving independence in 1990, the places where they had fought, in the hope of learning more about the events and correlating the places, images and events. Yet even the soldiers themselves almost failed to recognise these sites. The remnants of the war still visible—wreckage, ruins, near-derelict bomb shelters—make it barely possible to identify former battlefields. Sometimes it seems as if the war had just finished, sometimes as if the land had been utterly desolate and untouched for ages. ‘Sometimes I’m not even sure what it is I’m looking at. I am here without language. It is hard to read the signs,’ says Jo Ractliffe. Here, too, the images come too late, raising the question as to whether they always arrive too late and fall short of their desire to picture something. What difference would it make to have been ‘present’ at the time? Does the visibly rendered actually even provide us with information about what happened?Philippe Dubois speaks of a tear in the body of the image itself, of a schism that can hardly be concealed: on the one hand ‘the identity object, the representation, the form, the motif, the referentially designated (recognised as the same)—and on the other hand, precisely its other, its lack of form, which generates a spot or a symptom, its flawed symbol that wounds us and leaves us speechless and that proliferates in images as soon as we begin to look for it.’3 For Georges Didi-Huberman, too, the photographic image is riven: ‘The dual system of the image will therefore occupy every moment of this experience: between a certain knowledge of what is represented and an uncertain recognition of what is seen; between the uncertainty of having seen and the certainty of having experienced .’”1 Jo Ractliffe’s images navigate this uncertainty of having seen and the certainty of having experienced. They show the silence and the vacuity of the landscape where there is so little to see. Yet it is precisely this silence and vacuity of the images, their sometimes spectral quietude, that gives history the room to appear, even if in absence. Is it not first possible to lend visuality to something when the tear remains open to this end? When it does not want to succumb to disappearance under the weight of a description, a representational identity?

In her series “100 Years” (2007), Efrat Shvili likewise shows something different to what is visible. The boscage of the forest not only literally hinders the view of whatever is situated behind or amidst this thicket; it also camouflages the history of this forest, or more aptly put: it redoubles the act of making-invisible that is targeted by the history of this forest. Planted more than a hundred years ago by the Jewish National Fund as part of a reforestation programme in Palestine, the forest is indicative of an inscription onto the land, but also of the superimposition of a different history. The beauty and texture of the photographs suggest an authenticity that contrasts with the artificiality and the political ‘nature’ of this forest. With the images focusing on what cannot be seen, Shvili also shifts the pictures of her identity relationship into the realm of uncertainty and thus into another visual realm. And once again, within this shift, the ‘space’ where history itself does not appear but can assume presence is granted in the image. Although the exhibition title speaks of uncovering history, this does not actually imply that it suddenly becomes visible or could be presented. But perhaps it does mean that history can begin to proliferate in the pictorial voids, as a symptom of the images, as per Dubois.5

The images of Ahlam Shibli’s series “The Valley” were taken in 2007 in the village Arab al-Shibli and its lands in the Lower Galilee of Palestine/Israel. In this work Ahlam Shibli reads the landscape and the marks it bears against the backdrop of the village’s history. Half the inhabitants of the village Arab al-Sbaih survived the war of 1948 by hiding in caves of Mt. Tabor, the mountain on whose flanks the village had been built. The other half of the people opposed the Jewish fighters, to protect their lands, and as a consequence had to seek refuge in Jordan. In the camps the refugees kept the memory of their original home by using the old names and reproducing the previous social structure. The refugeesʼ living conditions are the subject of Shibliʼs work “Arab al-Sbaih”. When the people who had been hiding at the mountain returned to their property after the war they were forced to change the name of their village in order to avoid revenge from the victors. They renamed the village Arab al-Shibli.
“The Valley” shows the way the people from Arab al-Shibli are presently forced to scar the mountain that had protected them during the war. In order to be able to build a house they had to give up the name of their village and the respect for the land. While they were deprived of their sense of home, the refugees in the camps in Jordan kept a sense of home, but are without proper houses.

When Tatiana Lecomte combines completely different archives in “Die El Alamein-Stellung. Eine Montage” [Positions at El Alamein. A Montage] in order to construct a simultaneously fictional and documentary history of the scene of a battle during the Second World War—the beach of El Alamein—she also opens up a terrain between the images and within the narrative, where something can ‘take place’ that transpires only between the pictures. The nude photos of a woman, taken decades after the war, collide with wartime pictures. Although it is hardly possible to differentiate between the different sources, and although the artist herself presents to us the pictures within pictures (and thus basically authenticates and verifies them), it at least becomes evident that private obsessions meet with a collective traumatic event here, that a private space is erected within the narration of history.

Anthony Haughey’s series “Disputed Territory” (since 2006), created in part at the border separating Northern Ireland and the Republic of Ireland, also sometimes shows strange environments with hard-to-identify traces and obscure utilisations, places that have long been perceived and defined by the conflicting parties in totally different ways. The environs and landscapes, which are first made visible thanks to the artist, the interventions and traces that he hereby shows in the photos, are connected to complex power relations, changing history, and conflicting memories. Many of the markings, objects and interventions remain indecipherable and require a meticulous and complex interpretative approach (be it planting, excavation, or what appears to be rubbish but is actually spent munitions). It is the attempt to win back and decipher these meanings that first politicises such landscapes and re-inscribes them into the history of the conflict, but at the same time into the contested history of an uncertain recognition of what is seen.