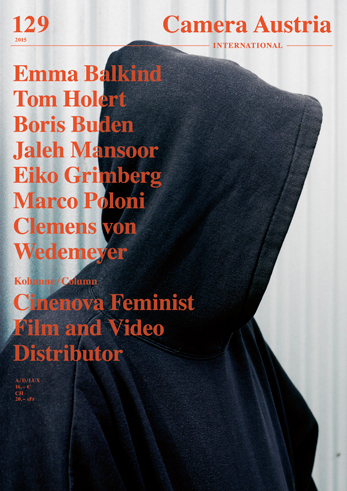 For the current issue, we have invited four authors to each explore one of four exhibition projects since 2011, drawing on related issues so as to continue, update or even rewrite the exhibitions, now in the magazine context: the two-part exhibition project “Communitas: The Unrepresentable Community” and “Communitas: Among Others” (2011), “Art Is Concrete” (2012–13), “Unexpected Encounters” (2013), and “The Militant Image” (2014). All of these projects have become immersed in extensive discourse and have set out to present the artistic works exhibited as practice that is also of theoretical significance. Against this background, the “material” published in our magazine is not to be viewed as documentation but rather as various acts of translating the exhibitions into the topology of the magazine.

In taking up the “Communitas” exhibitions, Emma Balkind writes about the connection between today’s subjects and concepts that are related to community or to the collapse of concepts of community, the ensuing consequences for the subjects, and the idea of the commons itself.
Tom Holert, in turn, responds to the question of the relationship between artistic practice and the political—or to the assertion that spaces for showing art are inevitably of political nature, as reflected by the project “Art Is Concrete”—with an important differentiation between the two practices, thus ensuring that no opportunities would be missed “in relation to the philosophical project of incongruence between art and politics”.
“Unexpected Encounters” put up for negotiation the concern that the translation of political questions and political activism into art spaces would lead to the eminent culturalisation of politics, that politics would transmute into culture, which would accordingly call for its reconstruction within the related political dimensions. Boris Buden appears to verify that such translations and reconstructions may bring unexpected encounters to light when he speaks of the asynchronicity of the contemporary that invariably arises when the °“West” thematises the “East” as having not yet arrived in modernity.
With “The Militant Image: Picturing What Is Already Going On, Or The Poetics of the Militant Image” we posed the question as to what makes an image in today’s political and media-permeated landscape a militant image. In addressing the question of militancy, Jaleh Mansoor focuses on the current wave of protest in Canada in the struggle against the exploitation of natural resources on First Nations land.
These issues also informed the decision to include a very unique collaborative project by the artists Eiko Grimberg, Marco Poloni, and Clemens von Wedemeyer. Here, the artists approximate an equally unique site, Michelangelo Antonioni’s villa along the northwestern coast of Sardinia.
As part of Cinenova – Feminist Film and Video Distributor, Emma Hedditch and Louise Shelley unfold the urgent and critical concerns of the organisation in the first part of the column.
This issue is rounded off by Jan Wenzel’s “The Revolving Bookshelf” and reviews of current international exhibitions and newly published books.