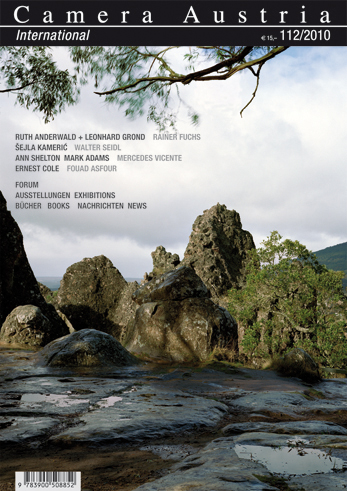 Once again we are pleased to present an array of very different artistic positions in this issue of Camera Austria. The contributions take the reader on a journey that begins in Austria, going on to ­Sarajevo and New Zealand, and ending finally in South Africa. In fact it is the examination of places, scenes and regions connected with history, individual and collective experience that links these works. Another point in common is that almost all of the artists featured in monographic contributions in this issue have already been presented in the magazine’s FORUM – in some cases already several years ago.
Rainer Fuchs introduces the work of the Austrian artist couple Ruth Anderwald + Leonhard Grond, focusing in particular on the reflection on media and perception in their photographic and cinematic work. In their current works, the artists draft new perspectives of representation and perception by destabilising familiar orders or illuminating scenes and situations that are usually hidden from view. Playfully, their photographs defy gravity or devote themselves to zones of transition and in-between areas (for example in their work “Notes on a Coast”, in which they explore the coast of Israel approaching to it from the sea) so as to lend reality and visibility to the unstable, the ephemeral and the changeable.
Walter Seidl gives an introduction to the work of Bosnian artist Šejla Kamerić. In his discussion of her photographic works, installations and films, he argues that the significance of Kamerić’s work is due to its link to recent history, namely the events of the Balkan War, that forms the historical foundation of many of the artist’s works. She recurrently relates her experiences during the three-and-a-half-years siege and bombardment of Sarajevo at the beginning of the 1990s to the contradictory value systems of post-communist Bosnia and Herzegovina that became established after the war. Šejla Kamerić’s work will also be on show at an exhibition (together with Tatiana Lecomte) at Camera Austria at the beginning of 2011.

Our thanks are due to all those involved in our project from the outset: the artists and authors whose experience we were able to share and from whom we were able to learn. The numerous collaborators, whose commitment and identification with our project made this work possible in the first place. We wish to thank our institutional partners for their financial support of this project, and we particularly should like to thank our advertisers, readers and subscribers, whose sustained interest has always been the most important motivation and who will, we hope, continue to support the work of Camera Austria in future too.

Daido Moriyama and the Fondazione Fotografia in Modena
GIGLIOLA FOSCHI

Wojciech Wilczyk: There is no such thing as an innocent eye
Halart, Łódź 2009.
KRZYSTOF PIJARSKI