January 28, 2010
in the course of the opening of the exhibition
Walid Raad
Sweet Talk: Commissions (Beirut) 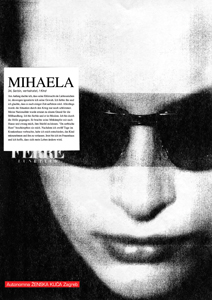 The jury explained their decision as follows: “For Sanja Iveković, one of the most important artists from former Yugoslavia and Croatia, the photography medium is an integral part of her critical conceptual approach. She shows how codes produced and standardised in the visual media − in advertising, newspaper reports, on television and in political propaganda − become ingrained in our collective social behaviour. In so doing, she makes differentiated statements on the relationship between image and body politics. Iveković takes photography back to simple materials in order to visualise power structures – always also gender-specific – that define the practice of everyday life in the constantly shifting spheres between “public” and “private”.”

Iveković has been developing her work consistently since the 1970s. International reception of her work and above all its topicality and significance for the younger generation bear firm witness to her position. In addition to her conceptual works of photography and writing, she has created films, video installations, actions and performances. Her explicitly socio-political commitment is clearly evident here too: the social and political field that Iveković explores addresses the role of women in the context of society. In her joint “Women’s House” projects with women living in shelters, for example, she convincingly ties artistic intervention back to specific living conditions.

A contribution on Sanja Iveković, including an essay by Natasa Ilic – »Sanja Ivekovic. Teaching Private Politics« – was published in Camera Austria International 90/2005.