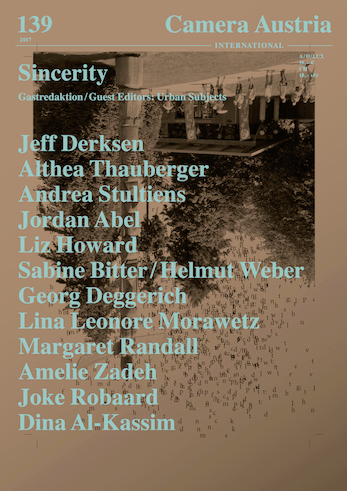 In the year 2014, we presented the exhibition “The Militant Image: Picturing What Is Already Going On, Or The Poetics of the Militant Image” together with Urban Subjects (Sabine Bitter, Jeff Derksen, and Helmut Weber), along with a publication of the same name. The focus here was on the militant image both as a condition of an image and an image of a condition. Tying into this collaborative research, we invited Urban Subjects to reflect, as guest editors, on a concept for an issue of the magazine Camera Austria International. After the most pressing questions were explored, a different term seemed more suitable for facilitating access to images, texts, and publics: sincerity. The idea of sincerity may seem a bit anachronistic or out of touch with the times, as if bound to a subjectivity that we are no longer really able to maintain. Yet sincerity still continues to traverse the aesthetic and the social, and it arises in quite unsuspecting places.
It is not actually necessary to broach the much discussed subject of fake or alternative news in order to encounter the question of sincerity these days—since the 1990s it has been virulent, when the digital seemed to undermine any sense of credibility of the images, and since imagery has been marked by general suspicion. From this point on, the mechanisms for authenticating images have shifted, with their effects taking centre stage rather than the truth of that being rendered. Since then, images have not shown a sincere image, but rather performed it. However, they never perform it alone. Urban Subjects has consequently broadened their argument of the necessity of sincerity to include the areas of language and poetry, especially in the realm of resistive political practice and with an emphasis on its enmeshment with images and texts—particularly the practice of sincerity, which is not a quality, but actually a social state where images, texts, poetry, bodies, and actions are integrated or even able to make possible the presence of sincerity. In his introduction, Jeff Derksen traces the history of sincerity, while placing the artists selected for this publication in relation to this history and also in relation to one another.
The concept of sincerity compels us to consider, in its appealing simplicity but also fundamentally, our relationship to photographic images, whether they are tied into artistic practice or everyday cultural contexts: Why are we still inspired by photographs? Why do we look at them? What do we expect from them? These questions are also associated with a hope that sincerity might be able to produce, not only represent, sincere acts—that is, not only to render the image of a condition, but also to effectuate this state.
We are grateful to Urban Subjects for the collaborative exploration, already lasting for a very extended period, of how the visuality of photography interferes in our present day in ever new ways and in ever new spaces of agency—and for, with their contribution, turning the magazine Camera Austria International once again into a platform fostering topical reflection on photography.
After the review section was omitted from the previous issue, since devoted to the Camera Austria archive, we are now offering you an extensive overview of exhibitions held over the past six months.

Cover: Jordan Abel, page from: The Place of Scraps (Vancouver: Talonbooks, 2013). Courtesy: the artist and Talonbooks.