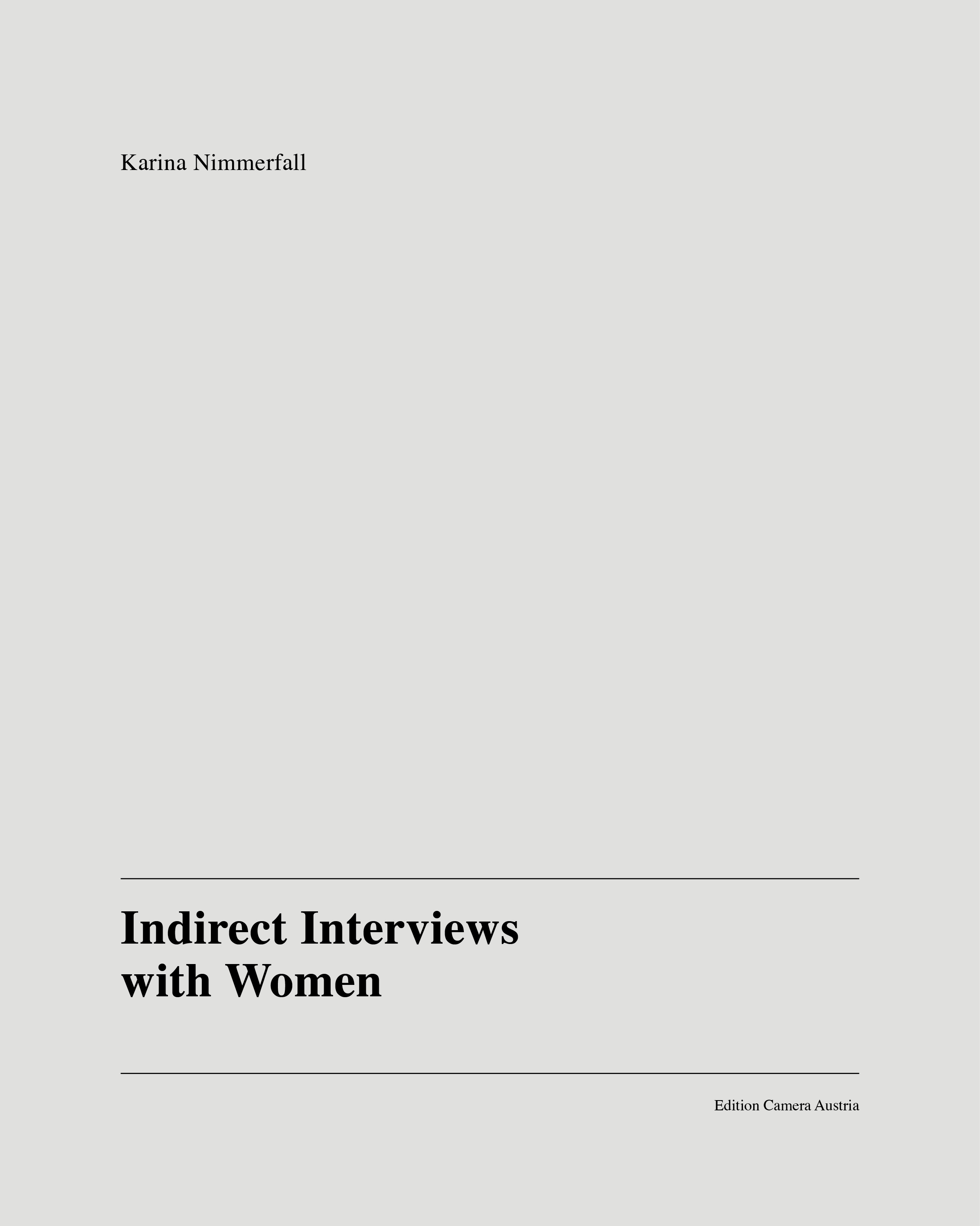 For her project “Indirect Interviews with Women,” Karina Nimmerfall researched material from the Mass Observation Archive at the University of Sussex and selected interviews conducted in 1941—during the period of the London bombings—with women about their respective living situation, their wishes and hopes for the time after the war. She juxtaposes these—edited—interviews with present-day photographs captured in the same neighborhoods where the interviews had been held. Employing different indices—language and image—past visions of a future are contrasted with this very future, which can now hardly be associated with the words. Inasmuch as the project is based on extensive research, it essentially involves a precisely calculated gap. The assemblages in “Indirect Interviews with Women” are not occupied with explaining; they span time and space as contradictions, as a collision, as a conflict that cannot be resolved. Citing Bertolt Brecht, one could say that the effect of Nimmerfall’s work, like that of any assemblage, rests in submerging the message that it supposedly conveys in crisis. But which (or whose) crisis does this imply?

Excerpt from: Ben Higmore, “Everything Is Evidence”

Everything in the world is evidence; it is just sometimes hard to know what it is all evidence of. In a world of rocks and dreams, of donkeys and theology, of dandruff and jealousy, it makes little sense to “just stick to the facts, ma’am,” as an FBI agent might demand. Of course, the very word “evidence” suggests something being recognized as a causal element, or as proof of some attestable phenomenon. “Evidence” seems to fall on the side of rocks, donkeys, and dandruff. But what do we do with the evidence that tells us that the world always outruns our attempts to grasp it, or reminds us that there are more things in heaven and earth than are dreamt of in our philosophy? The evidence of the world’s unwillingness to surrender all its secrets can make for compelling art; and sometimes that art can be dressed in the garb of the mundane and the humdrum.

In 1937, in a bid to turn the tables on a world of politicians, broadcasters, and newspaper publishers who felt authorized to speak on behalf of a population, a small group of artist-journalists and amateur social investigators established the project of Mass Observation. It set out to be a democratic feedback loop that, rather than telling an audience what a population thought, would instead allow people to speak for themselves. Inexpensive paperback books, radio programs, and newspaper and magazine articles would provide space for a myriad of ordinary voices to share their lives and opinions and to act as a counterfoil to the master narrative of a national “common” sense. Through a large volunteer panel charged with responding to regular questionnaires and invitations to keep diary accounts of specific days, and through endless observations and interviews, Mass Observation immediately began to amass an enormous archive of ordinary life. More than just gathering diverse opinions, Mass Observation would attend to habits and customs, moods and emotions, gossip and superstition to produce “weather-maps of popular feeling.”¹ To find out what a population felt would mean recording its dreams and nightmares, charting its routines, observing its idiosyncrasies. And this, albeit in a relatively piecemeal fashion, is what Mass Observation did and what, after a substantial hiatus during the 1960s and 1970s, it continues to do.

Eighty years on from its very beginnings, it is easy to treat the archives of Mass Observation as a superabundance of factual evidence, as a repository of actuality. And it is hard not to be captured by the radical positivism of its mission, and to want to plunder its reams of typed and handwritten paper for information about responses to war and government policies, or to get a sense of changing tastes and fashions. Sometimes going through papers that enumerate what hundreds and hundreds of households kept on their mantlepiece in 1937, and again in 1983, feels like reading a national inventory of spare buttons, safety pins, foreign coins, postcards, and dental appointment cards.² It can feel as if the past has become transparent, as if you could suddenly peek behind the net curtains of a thousand front rooms. But transparency and openness are only one side of the story that Mass Observation mobilizes. On the other side sits opacity, recalcitrance, and something like the mute obduracy of ordinary life: What do all those spare buttons that clearly sit on most British mantlepieces amount to? What do they mean, what do they stand for, what do they feel like?

Karina Nimmerfall has picked out a series of interviews conducted in 1941 by a group of female interviewers working for Mass Observation in a project funded by the Advertising Service Guild as part of their social mission to help the war effort by planning for postwar reconstruction.³ As Mass Observation knew all too well, Home Front morale fluctuated, and one of the causes for despondency in factories and in other places of work was the sense that the ethos of democratic, cross-class comradery that many were experiencing was just a temporary expediency, and that once war was over unemployment would return and with it all the other social ills which were targeted at the poor. The Mass Observation interviews that became the basis for the book People’s Homes were governed by a central question: “What sort of homes do British workers want?”⁴ There was an implicit message here: in the period of reconstruction better housing might be produced, and this could mean decent housing for all social classes; what you think and feel about housing might inform postwar social policy.

¹   Mass-Observation, Mass Observation (London: Frederick Muller, 1937), p. 30.
²    The 1983 mantlepiece study was set up to echo the 1937 study and could be seen as consolidating Mass Observation’s sense of itself as a resource for historians of the future.
³   See James Hinton, The Mass Observers: A History, 1937–1949 (Oxford: Oxford University Press, 2013), chapter 10, for an account of the circumstances for these interviews.
⁴    Mass-Observation, People’s Homes (London: John Murray, 1943).