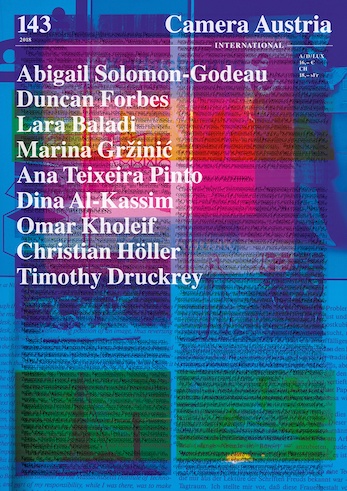 Ever since the first symposion on photography in 1979, the publication of which served as a departure point for the magazine Camera Austria International, Camera Austria’s work has been characterized by an intensive investigation into the relationship between text and image, theory and visual practice. Beginning with the fourth issue, the magazine regularly published the lectures of these symposia, the last of which, “Agents and Agencies,” took place in 1997.¹ Timothy Druckrey and Christian Höller, two of this issue’s authors, took part in the 1997 symposion; their essays highlighted the growing influence of cultural and visual studies as well as the questions media studies posed regarding the debates waged over photography.
This broadening of the contexts in which the photographic image plays a role and undergoes theoretical examination can also, however, be traced back to the beginnings of the symposia. Diverging or opposing positions were placed in relation to one another to widen the purview of the debate over photography on an ongoing basis—in the cultural sciences, visual studies, urbanism research, architecture, literature and film studies, philosophy, media theory, semiotics, the politics of representation, political activism, feminist theory, postcolonial studies, etc. First and foremost, however, the symposia were also a locus of exchange between theory and artistic practice. Today, this transdisciplinarity or even postdisciplinarity is taken for granted. In this regard, from a contemporary point of view, it appears that during the symposia on photography it wasn’t so much existing agreements that came to expression, but a polyphony of disagreement, discrepancy, and dissent corresponding to the simultaneous, albeit opposing perspectives on the photographic image.
In October 2018, a symposium on photography will once again take place in collaboration with the festival steirischer herbst, dedicated to the theme of the “Violence of Images” and following in this tradition of the polyphony and expansion of discourses. This symposium again brings together artists and experts from various disciplines: Christine Frisinghelli, Marina Gržinić, Ana Hoffner, Tom Holert, Jakub Majmurek, Guy Mannes-Abbott, Ines Schaber, Ana Teixeira Pinto, and Ala Younis. In contrast to the past, however, we have decided to publish this issue of Camera Austria International, which is deliberately conceived as a text and theory issue, concurrently with the symposion as a kind of ground-preparing reader. In an intersection between magazine and symposion, some of the participants will also publish an essay in this issue. Other lecturers and authors have already published in the magazine, some of them having cooperated with Camera Austria for many years. The question we posed to the invited authors was simple: what themes and reflections on photographic subjects—whether they be artistic or related to everyday culture—are currently at the top of their agenda? We’re fascinated by the result, a panorama of observations on and insight into visual cultures: art photography in the age of catastrophe; questions of censorship and of the visual representation of revolution; the question as to what, if anything, can be gained from racialized images; the way in which right-wing authoritarian politics are expressed in conventional imagery; the forensics and representability of the sonic; the phenomenon of demobilization through images, and the resulting visual “instant archive.”
As a team that’s been working together on the production of this magazine for many years, we are, of course, well aware that reading and researching mean something completely different today than even a few years ago. Much of the time, it’s all about short, fast information, summaries, excerpts to move through quickly. Knowledge is supposed to come to us—prepared, explained, commented upon, usable. In a time in which anti-intellectualism is on the rise, however, it seems appropriate for this very reason to slow down and branch out, elaborate, become more comprehensive. In agreement with Stuart Hall, we believe that reality is not something that can be understood easily. And the texts are important in this effort against reducing photographic images to things that are merely glanced at in passing or while turning the page. Images require time, just as texts require time to be read and understood; each prepare us for a slowness that “would be a time that takes time, that is, a time that takes the time for the slowness of the investigation and of the architectonics” (Alain Badiou). This is the time in which texts meet images: “Images and words collide so that thought has its place in the visual” (Georges Didi-Huberman). This place, or rather, this moment of collision could also mark the political movement of images, their politicization; it could also shed light on the visualization of a politics that has replaced thought with allegation. How do the ways in which the visible is contingent on the word manifest themselves; what regulation in the relationship between knowing and not knowing are images subjected to; how can a practice such as representation be maintained when the images no longer primarily depict something, but are integrated into events in various ensembles?
We’ve developed the current issue in the context of these questions in the hope of reaching our allies for the idea of the detailed, the scrupulously researched, and the comprehensive—while addressing the history of Camera Austria and bringing it up to date. Accompanying the texts in this issue is an expanded image section that we’ve developed in close cooperation with the authors who have long accompanied and left their mark on Camera Austria, and who were invited to propose artists whose work they’d like to share with the readers of Camera Austria International. We’re pleased that the contributions presented here offer a multi-faceted insight into current positions in art photography, one that’s proven unexpected, even to us.

1 And on a less regular basis thereafter: “Positions of Japanese Photography” (2003) accompanying the first exhibition in the new space of the Iron House Graz to mark the opening of the Kunsthaus Graz, “Pierre Bourdieus Blick auf die Gesellschaftliche Welt” (“Pierre Bourdieu’s View of the Social World,” 2004), as well as the Symposion on Photography XX, concurrent with the publication of Camera Austria International no. 100/2007, which focused on the South African Market Photo Workshop, cofounded by the recently deceased David Goldblatt.